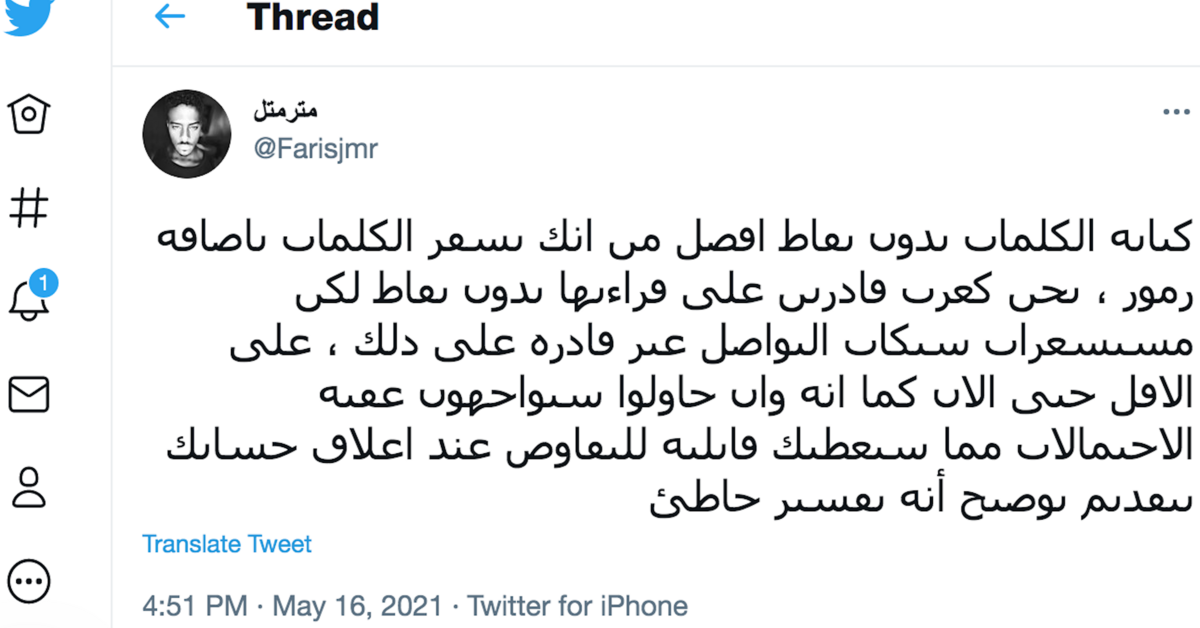 Egyptians have been finding workarounds like posting in early Arabic script, which does not include dots, to evade algorithmic censorship on Facebook and Twitter. Websites can help transliterate their text into the old form.

Many Egyptian and Arab social media activists who have expressed solidarity with Palestinians amid Israeli efforts to displace families from Jerusalem’s Sheikh Jarrah neighborhood and Israel’s bombing in the Gaza Strip have complained that their posts on the Facebook and Twitter platforms were removed. Many reported being banned from posting for 24 or 48 hours or had their accounts suspended altogether.

As violence soared in the Gaza Strip between Hamas and Israel, it brought controversy between Egyptian and Arab social media activists and the social media platforms themselves. According to Fady Ramzy, an e-marketing consultant and digital media lecturer at the American University in Cairo, Facebook and Twitter algorithms have been flagging certain words and hashtags about the events in Gaza.

Ramzy told Al-Monitor that social media users have discovered tricks to avoid Facebook’s algorithmic censorship. “These include an early Arabic script that quickly gained popularity among social media activists, especially in Egypt. Activists also started leaving spaces between letters in a single word or separating letters with foreign symbols or other letters,” he explained.

Ramzy added, “Facebook and Instagram’s algorithms have so far failed to notice, but I think they will not last long. The artificial intelligence of algorithmic censorship will uncover these tricks in the next few days. When some media activists changed the hashtags they used for current events to escape the algorithmic censorship at the beginning of the crisis, the algorithms quickly started censoring the content regardless of whether the posts supported a specific position. … Some accounts were blocked from making comments and others were temporarily suspended.”

Amro Atifi, a professor in the Arabic language and literature department at the Faculty of Arts at Cairo University, told Al-Monitor, “In the early Arabic alphabet and script, Words were used without diacritic marks or dots and understood based on context. Dots were placed on the letters during the rule of Al-Hajjaj Ibn Yusuf over Iraq. The move aimed to distinguish the letters of the Noble Quran while many people were converting to Islam during that period.”

“The recent popularity of the early Arabic script is not likely to last. It will fade when the need for it ceases to exist,” he said.

Frustrated Egyptian and Arab social media activists have also created online campaigns to lower the ratings of Facebook’s applications, on Google Play and the App Store as well as a campaign to boycott Facebook launched May 21.

Harithi added that calls to lower Facebook’s ratings will not push those in charge of the social media platform to review and modify the algorithms. “Calls to boycott Facebook will not be effictive. Facebook, however, could be affected if Arabs stop paying for advertisements posted on the platform, one of its most important sources of income.”