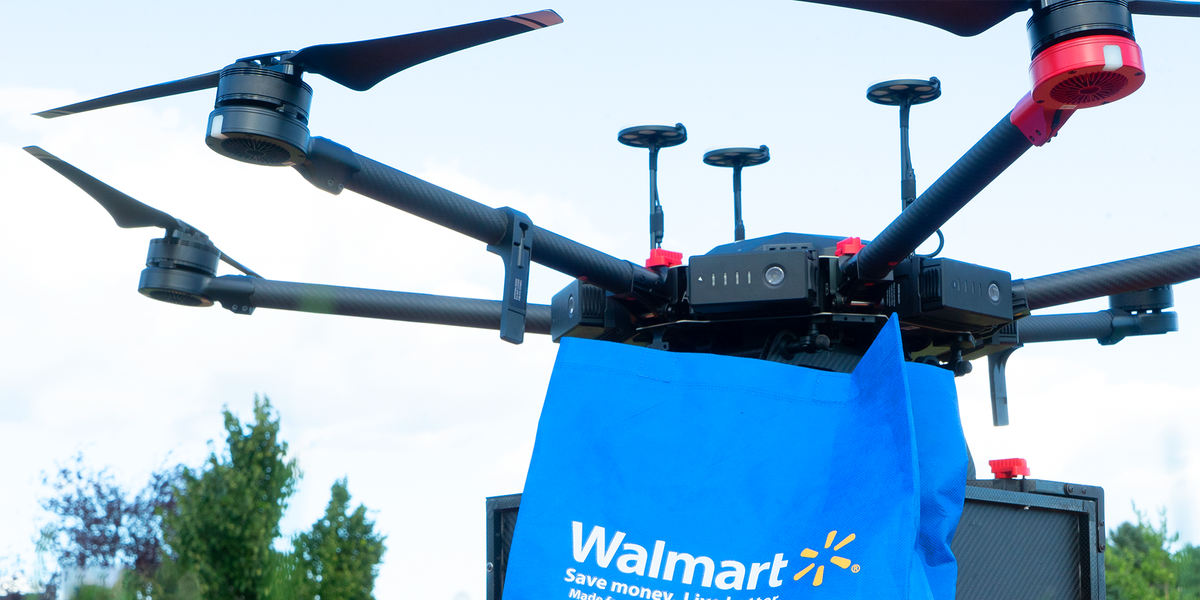 Some companies have focused on either using autonomous ground robots or drones to deliver goods to customers as part of their last-mile strategies.

Walmart is looking to use robots and drones during the same delivery.

If the ground robot isn’t able to complete the route because of an obstacle, or if it is significantly slowed down because of various conditions, the drone serves as a “back-up delivery mechanism” to complete the delivery, the filing said.

The application focuses on how important delivery is for retailers and the recent push to employ autonomous ground vehicles to complete deliveries to customers.

In some cases, the two pieces of transportation technology may not be able to complete the delivery, according to the filing. For example, if the drone has to travel a far distance, it may not be able to because of limited battery power, especially if it’s carrying a heavy object.

A Walmart spokesperson said the company is “continuously exploring how emerging technologies may shape future shopping experiences and are testing new ideas all the time.”

“Some ideas become products or services that make it to customers,” the spokesperson said. “And some we test, iterate, and learn from.”

This is not the first time Walmart has invested in either drones or autonomous ground robots.

The company originally partnered with the drone-delivery company DroneUp in 2020 to launch trial deliveries of at-home COVID-19 self-collection kits. Walmart then invested in DroneUp in 2021 after safely completing hundreds of drone deliveries from stores, and in June, the retailer announced it would expand its drone-delivery network to 34 sites across six states and reach about 4 million US households by the end of the year through its DroneUp partnership.

Earlier this month, as first reported by Fortune, the CEO of Serve Robotics, Ali Kashani, said his Uber-backed startup was working with Walmart. A Serve Robotics spokesperson previously confirmed to Insider that the company’s robots had been operating in Bentonville, Arkansas, the home of Walmart’s corporate headquarters.

In a statement to Insider at the time about the partnership, Walmart said, “We’re constantly testing new and up-and-coming technology to identify solutions that best meet our customers’ needs.”

Beyond autonomous robots, Walmart has also been investing heavily in larger-scale autonomous-vehicle partnerships. The retail giant has forged partnerships with four self-driving companies in roughly two years to focus on middle- and last-mile delivery operations, a Walmart spokesperson previously told Insider, with pilot programs in cities such as Phoenix and Miami.

Do you work at Walmart or have insight to share? Contact the reporter Ben Tobin via the encrypted messaging app Signal +1 (703) 498-9171 or email at btobin@insider.com. Check out Insider’s source guide for other tips on sharing information securely.