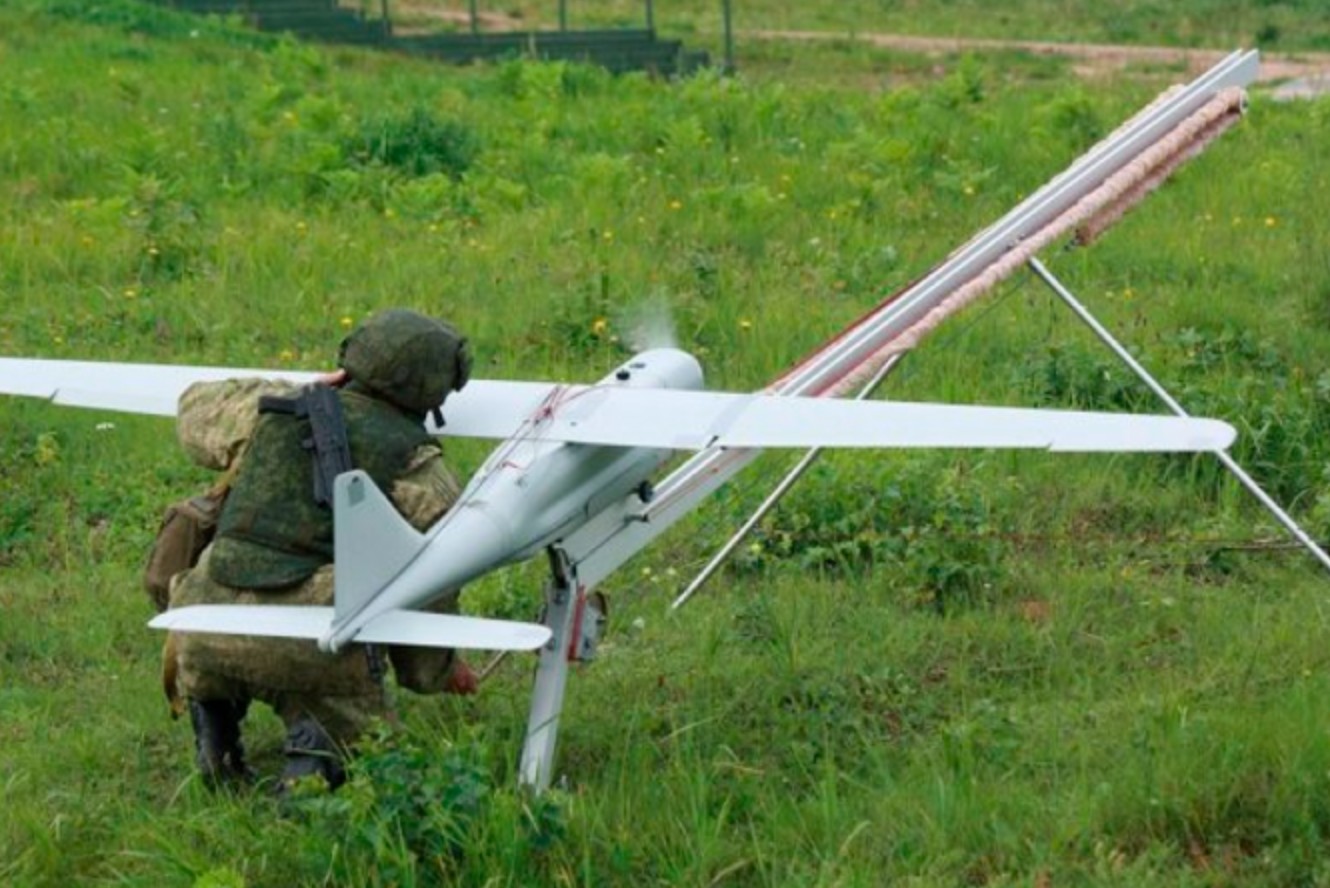 Over the past four months, the Russia military analysis community reevaluated earlier assumptions about Moscow’s military’s capabilities, starting from the onset of the Ukraine invasion, through today’s grinding tactics and concepts that show a more competent Russian force eventually emerging against Ukrainian defenders. This reevaluation likewise involved the assessment of unmanned and autonomous capabilities that Russia touted before the war as game-changing technology. At this point in the conflict, the videos and images from the Ukrainian front confirm that enabling technology like unmanned aerial vehicles are in fact a significant part of how Russia fights today in Ukraine, underscoring that this capability is pivotal to the Russian military’s ongoing war.

Prior to this conflict, a lot of useful analysis and commentary was available for review about Russia’s development of unmanned aerial, ground, and maritime systems as near-future enablers of what was supposed to be a modernized Russian military preparing for the next war. A lot of that information was derived from Russian-language public sources, and judged accordingly, given the brevity of descriptions or occasional lack of technical specifications, beyond initial and sometimes hyperbolic announcements about the potential use and utility of these platforms. In the opening weeks and even two months into its invasion of Ukraine, the Russian military’s autonomous and unmanned performance was rather weak or even altogether lacking, leading to early conclusions that perhaps this capability was over-emphasized when compared to other systems and weapons. However, as the months went on, concepts and tactics took shape that were more in line with the Russian military’s pre-war preparation and training that involved unmanned aerial vehicles in particular as key enablers of ground forces. Russia’s current performance in the conflict — which involves heavy use of aerial drones and growing use of unmanned ground systems — is underscoring earlier assumptions about the utility of this technology in war. Despite concerns raised in the early weeks of the war about the accuracy of Western analysis of the Russian military, the community still had a good grasp of the Russian military’s commitment to robotics and autonomy. Future analysis should incorporate what we see in the current war, with the pre-February 2022 analysis in the background.

As the relevance of this technology continues to grow in this conflict, it is important to note a few facts about Russia’s military autonomy and AI-enabling research and development. Information from the Russian media and in military journals enabled the analytical community’s understanding of overall research and development trends across the Russian military. Announcements of systems built and tested piecemeal, or of technology allegedly in development, pointed to the evolution of Russian military thought similar to that of other high-tech militaries like those of the United States, United Kingdom, Japan, South Korea, or China. This general direction suggests a slow but eventual, and seemingly unavoidable, evolution from military technology with the human fighter as the key performance metric toward one in which unmanned and autonomous systems will take on greater responsibilities. These autonomous systems continue evolving, after significant testing and evaluation, into combat partners, and eventually into the first line of attack. To analysts outside Russia, that seemed to be the general direction in which the Russian military was heading.

While many of these Russian projects are still ongoing, and probably will be in the testing stages for quite a while, studying them nonetheless yielded some insights into how Russia is trying to conceptualize future ground warfare, maritime strikes, or aerial combat to counter and dominate adversaries. This information was on a parallel path to the U.S. Department of Defense’s thinking through today’s and future battlefield problems that can be solved by “military robotics,” a catch-all phrase used by both the Russian military establishment and its journalist community. Of the dozens of projects funded by the Russian Ministry of Defense, few eventually matured to the point of serious testing and evaluation. But even a few such concepts — such as the Marker unmanned ground vehicle, Okhotnik unmanned aerial combat vehicle, and Vityaz deep-diving autonomous underwater vehicle — provided an overview of what could potentially come down the line, assuming many factors like economics, manufacturing, and political support lined up. These factors included not just the funding and technical acumen of the enterprises and manufacturers, but the user’s capable evaluation of how such technology would enable operations in a difficult and unpredictable combat environment.

This leads to the second assessment about the presence of this technology at the tactical level in Ukraine. The Russian military is flying numerous drone missions practically around the clock, losing many drones to Ukraine’s capable air defenses. With the Ukrainian military proudly showing off many downed Russian aerial drone models on social media, questions arose about the tactics that eventually lead to so many losses, and the longevity of the Russian drone fleet in this war. In fact, many of these failures probably originate in Russian drone training and testing. What was — and still is — notably absent in the Russian defense media’s analysis and announcements of drills with unmanned aerial vehicles is the ability of “red teams” to really test the Russian forces’ capabilities and ad-hoc battlefield flexibility. In the United States, such “adversary” or opposing force teams exist across all services to constantly test existing tactics and technologies, and their work is publicly debated, especially when they score training and exercise successes against “blue” forces.

On the other hand, the Russian media description of exercises involving emerging technology like drones often described a one-sided combat scenario, with the “blue” force successfully using drones against “saboteurs” or “enemies” to eliminate the adversary formations. In these exercises, the drones would always locate the opponents and would transmit their coordinates for subsequent ground and aerial strikes. Rarely did the Russian military team simulating the adversary employ counter-measures against the main force, and the pre-determined drill outcome placed the drone on the winning and unchallenged side. In fact, even the description of the opposing forces used often in many of these exercises — “saboteurs” instead of enemy special forces or regular troops willing to disrupt Russian operations — evoked formations and units less professional or less equipped for the task. There were several large-scale Russian military drills like Zapad-2021 that involved sophisticated counter-drone systems and tactics, but those likely featured pre-scripted scenarios that announced different vehicle types like Orlan-10, Forpost, and Orion drones completing their missions seemingly without significant obstacles to their operation.

Prior to the invasion of Ukraine, the Russian military establishment broadly used the phrase “lessons learned from Syria” to denote the general direction for force training. The Russian military may have underestimated the strength of Ukrainian air defenses and trained its aerial drone units against what they thought were forces similar to those encountered in Syria. The numerous Russian losses over Ukraine early on may have created the impression that the Russian military overestimated the success of its drone units and technologies. However, as the war continues, Russian military operations involving drones as key elements of reconnaissance-strike contours point to the eventual emergence of core tactics that were tested by Russian ground, intel, airborne, and marine forces. Today, Russian soldiers launching their Orlan-10s to directly strike or identify Ukrainian forces, or using a commercial DJI model just to get additional intelligence and reconnaissance data “around the corner,” indicates the continued presence of such technologies that have become almost organic to practically any military formation in this war.

The Russian drones remain one of the most visible high-tech aspects of this war, whether military-grade Orlan-10 or Eleron-3, or the numerous civilian DJI models. These unmanned vehicles are key to pivotal tasks like identifying targets, serving as artillery spotters, or as just another pair of eyes to monitor the ground conditions. Their loss is built into their missions — they are supposed to be expendable and relatively inexpensive when compared to launching manned missions to do the same job. Pre-war Russian media descriptions and articles on drone development and future capabilities supported the overall Ministry of Defense concept of technology assisting humans on dangerous missions, even if augmented by hyperbolic statements from the Russian defense industry about mass acquisition of these and other advanced systems in the very near future.

The same can be said of the numerous Russian unmanned ground vehicle projects — systems that are eventually supposed to provide logistical, intelligence, de-mining, fire, and combat support to Russia’s massive ground forces. Most of these projects have not yet graduated past the development and testing stages. The slow but steady roll-out of such systems like Uran-6 and Kobra unmanned ground vehicles in Ukraine for de-mining and intelligence-gathering underscores Russian willingness to continually test such technology in its past, current, and future wars.

Evaluating Russia’s pre-war maritime autonomous systems was more difficult, given that less information existed in the first place beyond the official announcements of programs launched and potentially tested. Overall, the available data still made it possible to paint a larger picture of what may come next if the stars align for the Russian defense industry and the Ministry of Defense.

This alignment may be in question given the current state of Russian military performance in the war, the ongoing transformation and restructuring of the Russian economy due to sanctions, the brain drain that seems to be affecting the Russian defense industry, and the hints that Russia may be running out of key high-tech equipment and components. None of this is stopping the Russian Ministry of Defense from placing an emphasis on military autonomy and robotics as key investments in future combat capabilities. It remains to be seen whether these announcements are propelled by inertia from pre-February 2022 planning and resource allocation, or decisions made in light of the information analyzed from the war. If anything, the ongoing combat in Ukraine and the heavy toll on soldiers reinforces proposals by the Russian military establishment for substituting uncrewed aerial, ground, and maritime systems in place of the aircraft, helicopters, tanks, armored vehicles, and naval vessels that are being lost in significant numbers by both sides. It is unlikely that the Russian military would significantly alter its current research and development ecosystem for such emerging technology, considering how much other leading and competing powers are investing in military autonomy and robotics.

Whatever lessons Russian military learns from this war — and is willing to make public — would still create space for the utility of such robotic systems, given the overall global trends and discussions of these systems for combat. This may seem like a tall order at this point, given the mounting numbers of Russian soldiers killed and the prevalence of crewed systems taking heavy punishment from the Ukrainian military, all pointing to the centrality of human fighters to Russian military thinking. The initial surprise at the relatively poor Russian military campaign was also juxtaposed against the Ukrainian military’s successful fielding of different types of aerial drones to blunt, counter, and even defeat Russian advances. With this technology now firmly in focus by all who follow this war, the Russian military will continue analyzing its near- and long-term impact on force development and combat operations, as well as the need to operate such systems in combined arms formations. As researchers and analysts of the Russian military in general, it is our task to record and to understand these deliberations, while keeping an objective eye on what the Russian military says, does, and writes about the eventual emergence of new technologies in future wars.

Samuel Bendett is an adviser with CNA Russia Studies Program and an adjunct senior fellow with the Center for a New American Security.