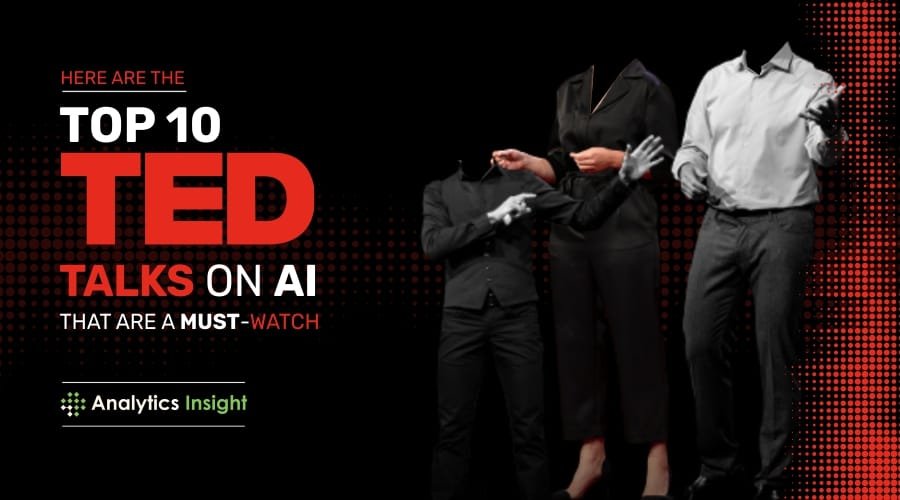 In the current scenario, where everything is going digital, Ted Talks have a great role in educating and imparting knowledge to a wider audience. These engaging interactions have robbed the minds of people and Ted Talks do not consume a lot of time. Instead, they just spread ideas in a very concise, interactive form so that it hooks and does not bore the audience. Ted Talks cover a wide variety of themes and topics, technology is one of them. It has a great archive of talks on artificial intelligence. AI is consistently changing the world with innovations that shatter the conventions. Hence, it becomes important to know and update about the technology. Here is a list of the top 10 Ted Talks that revolve around AI technology and tries to elevate the knowledge of people around this disruptive tech.

1. The incredible inventions of intuitive AI

In this Ted Talk, Maurice talks about the current Augmented Age, wherein cognitive augmentation, advanced robotics, and intuitive capabilities of AI are explored. He says that computers will learn on their own, they will augment the human ability to imagine and design. Along with this, robots will reduce human labor and we will have systems that can create and operate on their own with minimum or no human intervention. Maurice highlights several projects by his team and other beautiful examples to clarify the concept.

2. Can we build AI without losing control over it?

In the talk, Sam sheds light on the darker side of artificial intelligence. He says that the spectrum of intelligence extends beyond our understanding and when we are building intelligent machines that are more intelligent than humans, they will possibly explore the intelligence spectrum in ways beyond what we did and this might affect the human race. Sam further ponders on the impacts of creating superintelligent AI in the future and how it would affect the economic, political order, and safety.

3. Get ready for hybrid thinking

An American inventor and Futurist, Ray Kurzweil invented the first Optical Character Recognition (OCR) software that could transform written words into data. He is involved in the fields of text-to-speech synthesis and speech recognition technology.

In the talk, Ray describes hybrid thinking, which combines human and computer thinking, and how it will evolve in the future. He describes the human neocortex, its functions, and how AI can augment them. Along with the history of the neocortex, Ray predicts that there would be a nanobot-neocortex interface that will be connected to the cloud.

Zeynep is a Turkish techno-sociologist and writer. Her work majorly highlights the social implications of new and disruptive technologies like AI. Zeynep is a contributing writer at The New York Times, and The Atlantic.

5. The wonderful and terrifying implications of computers that can learn

Jeremy is the CEO of Enlitic, an advanced machine learning company. He is a data scientist and entrepreneur from Australia. Previously, Jeremy served as the President and Chief Scientist at Kaggle.

In this Ted Talk, Jeremy highlights both the positive and negative implications of disruptive technologies like computation, machine learning, and deep learning. As computers augment human behavior, it also wipes out a service industry that used to perform different tasks including reading documents and driving cars. Jeremy initiates a discussion on how humans would evolve their social and economic structures to accommodate these new changes brought by technology.

Fei-Fei Li is currently serving as a Sequoia Professor of Computer Science at Stanford University and is a recognized computer scientist, educational leader, and writer. She is also an elected member of the National Academy of Engineering, an American non-profit organization.

In this talk, Fei-Fei Li discusses the latest advances in the field of computer vision. She explains her area of research and says that the machines we have built can merely see the object and cannot understand its meaning. Fei-Fei-Li highlights the importance of huge datasets in training the machines and models to make them understand images better. She says that she aims to build computer visual intelligence and create a better future through this.

7. What happens when our computers get smarter than we are?

Nick is a philosopher known for his works on nanotechnology, human enhancement ethics, machine intelligence, and superintelligence risks. He has authored more than 200 publications and written two books.

Nick, in the Ted Talk, says that machine intelligence will be the last technological invention that humans have to make, and it will eventually evolve and get smarter. Nick asks people to think hard about the implications of these intelligent machines and ponder if they will rely on human values or create their own. He says that humans should be able to control AI before the AI explosion occurs and before it becomes self-aware.

8. This app knows how you feel — from the look on your face

Rana el Kalouby is a computer scientist and the CEO and Co-founder of Affectiva. Her works revolve around expression recognition, affective computing, emotional AI, and facial recognition.

In this talk, Rana states that human emotions influence every aspect of our lives and she aims to bring back emotions into digital experiences. She shares her journey and tells how she and her team created technologies that can read and respond to human emotions. Rana demonstrates an app that can read emotions and describes how it was developed and what implications the technology has in the future.

9. Watson, Jeopardy, and me, the obsolete know-it-all

Ken Jennings is a consecutive winner of the game show Jeopardy and is the highest-earning American game show contestant. Ken had computed with the IBM supercomputer Watson in a challenge, where the supercomputer won.

In this talk, Ken describes the whole process of competing with a supercomputer and tells how AI can be powerful. Ken poses the question that if human brains shrink with increasingly outsourced knowledge sources, will computers remember more facts than humans. He says that we could either live in a world with human brains or one with evil supercomputers.

Garry Kasparov is a chess grandmaster and former World Chess Champion. He has played legendary matches against IBM supercomputer Watson, which made him a recognized figure in artificial intelligence and human-machine relationship.

In the Ted Talk, Garry highlights the growing innovations in technology and how machine learning, deep learning, and AI is flourishing in different fields. He says that humans must be ready to face their fears if they desire to get the most out of technology and humans should work with the machines and create innovations.