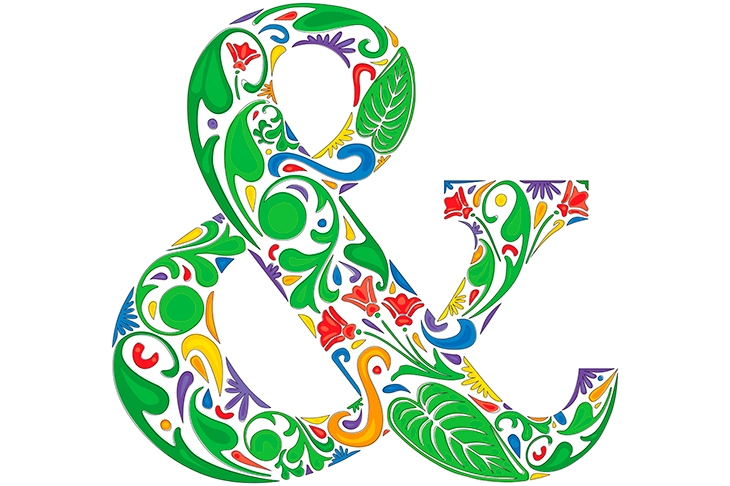 Hyphens and Hashtags: The Stories Behind the Symbols on our Keyboards

This is such a great idea: a book with one short essay per punctuation mark or typographical symbol. Of course, our commas, ampersands and exclamation marks all come from somewhere; all were invented at some point or another and their stories are ever-changing. Computer coders, for example, have recently moved previously unsung but elegant marks such as the hashtag and the ‘at’ sign back to centre stage.

Claire Cock-Starkey is a confident and likeable host and makes a witty crack about her own surname in her essay on the hyphen. She somehow elevates what could have been a nerdy primer into something grander, and at various moments the book becomes meditative, poetic, philosophical and funny, as well as scholarly.

There is much to enjoy. The strangely named and beautifully shaped ampersand, we’re told, evolved from the Latin ‘et’. It is strictly called a ‘glyph’, and Cock-Starkey reveals that in the 18th century it was honoured with the 27th place in the alphabet. As for its weird name, it derives from the phrase ‘and per se and’, used by poor 18th- century children when reciting the alphabet, per se meaning ‘standing on its own’. It became an official word in 1837.

Many punctuation marks were invented by the ancient Greeks, evolved by the medievals and fixed by the early printers. The colon, for example, which means ‘limb’, was invented by Aristophanes of Byzantium — not the playwright, but a librarian. It originally looked like a full stop and was intended to mark a breathing space between sections of text for the purposes of reading out loud. The great seventh-century linguist Isidore of Sevile then decided on a three dot system for different lengths of pause: low dot for short pause, middle dot for medium pause, high dot for long pause. A variety of competing ideas were used by different orders of monks in the Middle Ages and Cock-Starkey says it was Caxton who ended the chaos by coming up with the slash, colon and full stop.

The semi-colon is a funny fellow. It was invented by a Venetian printer called Aldus Manutius in 1494 for editions of Dante and Erasmus. He adapted it from a bit of musical notation called the punctus versus, and it was Ben Jonson who really made sure it stuck by including it in his 1640 style guide, The English Grammar. In the 18th and 19th centuries writers went mad for it and in 1837 two rival French legal experts fought a duel over its use: one favoured the semi-colon to end a certain passage, the other a colon. The semicolon supporter was wounded in the arm by the apologist for the colon. Today I still find it an impressive piece of punctuation and young people would be well advised to use it in emails in order to impress their bosses.

The author has made great efforts to bring things up to date and has unearthed fascinating stories about the guy at Twitter who brought back the hashtag, and the inner workings of the committees which set emojis. However, she occasionally falls into the trap of writing about contemporary fads in order to appear with-it, and thus dignifies a mere craze. For example, the use of multiple brackets as hugs or the triple bracket as a sign of anti-anti-Semitism are surely already dead.

Some sections are sad. Take, for example, the sorry tale of the interrobang. This mark is actually quite a good idea. It’s a cross between an exclamation mark and a question mark and was invented in 1962 by an ad man called Martin K. Speckter. It was doing well and in 1968 even made it on to some Remington typewriters, a true sign of success. But in the 1970s it faded away, and though we’re told it’s still used in computer programming, it looks likely that the ‘plethora of emojis at our fingertips’, as the author puts it, will consign this potentially useful glyph to obscurity.

For a book about keyboard symbols, it’s a real shame that the marks themselves are horribly reproduced in a washed-out grey colour and are often semi-obscured by the chapter’s title. I would have loved a nice whole page dedicated to each, so you could meditate upon it and really study it as an artwork. But it’s a lovely read, full of fun and fascinating facts; a book to be kept by the bedside and consulted on a regular basis.

In 1837, two rival French legal experts fought a duel over the use of the semi-colon