Who would have imagined that in 2021 we’d be living in a world where working remotely is the norm, video conferences replace in-person meetings, and family and friends stay in in touch via virtual chats and hangouts?

While the circumstances that led us to this point were unpredictable and challenging, it was inspiring to see how individuals, brands, and businesses pivoted to new ways of living, working, and communicating with one another.

Guinness World Records (GWR) is no stranger to the “pivot,” having had to shift focus and adapt to this new technology driven world.

For years, the power of record-breaking has been used to initiate global movements, promote positive change, spark conversations on relevant topics, and in certain cases just bring some light-hearted fun into the lives of those who participate.

During a time when bringing people together and keeping spirits high is more essential than ever before, it was GWR’s priority to ensure that the power of record-breaking could continue to be used in this way – but safely.

In 2020, GWR developed an array of new online record categories ranging from those that are social media channel specific to others that take place on platforms like Zoom and Microsoft Teams.

As you plan for your next 2021 campaign, get inspired by these organizations that made history in 2020 with online record-breaking experiences:

Orion Pictures and its agency were tasked with finding a unique way to drum up excitement for the fully virtual movie release of Bill & Ted Face the Music – the third film in the Bill & Ted series.

With rock music at the heart of the film, the company enlisted GWR to create an online record experience that would highlight this theme and decided on most people playing air guitar online simultaneously.

On 24 August, Bill & Ted fans from around the world joined to participate in the record via Zoom while an official GWR judge tuned in virtually to explain the guidelines and wish participants good luck on their attempt.

Once the evidence was reviewed, the final record was confirmed as 186 participants and event organizers celebrated by sharing a recap video with online Bill & Ted fans the day before the film premiere – watch the video above!

Each year, Amazon Web Services (AWS) hosts a conference called AWS re:Invent where it challenges its employees to a record title attempt for the largest chicken wing eating competition.

Due to the pandemic, the 2020 re:Invent conference went fully virtual, but event organizers still wanted to continue their tradition of record-breaking and decided to take on an official attempt for the mostpeople toasting online simultaneously.

The event took place on 30 November, where 335 participants successfully achieved the record by meeting and toasting across a number of virtual rooms using Amazon Chime.

To encourage and inspire its local community to stay active during the pandemic, UCHealth joined forces with the Colorado Rapids Youth Soccer Club to host an epic record title attempt for the most people in an online video chain passing a football (soccer ball).

Many members of the Rapids youth soccer team took part, passing a soccer ball from the left side of the frame to the right in a series of 5 second clips that when edited together created a chain that linked a record-breaking 476 participants.

Check out the recap video above!

Hormel Foods – Most users in a pizza party video hangout

As part of Hormel Foods’ Spirit Week (a celebration of the company’s team members around the globe who have worked to ensure a consistent food supply during the pandemic) the brand hosted the ultimate virtual pizza party with a record attempt for the most users in a pizza party video hangout.

More than 3,000 people joined the Zoom-hosted virtual party, which featured a number of prizes and special guests.

To set the record, at least 500 photos of individuals (one photo per Zoom username) with a full pizza pie or slice of pizza had to be uploaded during the 1-hour event.

The final tally and official record title set during the party was 907 photos, but the brand did not stop with its record feat.

Instead, Hormel Foods donated $10,000 to Pizza vs. Pandemic, a joint program from Slice Out Hunger and Slice, to support frontline healthcare workers by coordinating large orders with independent pizzerias across the country. 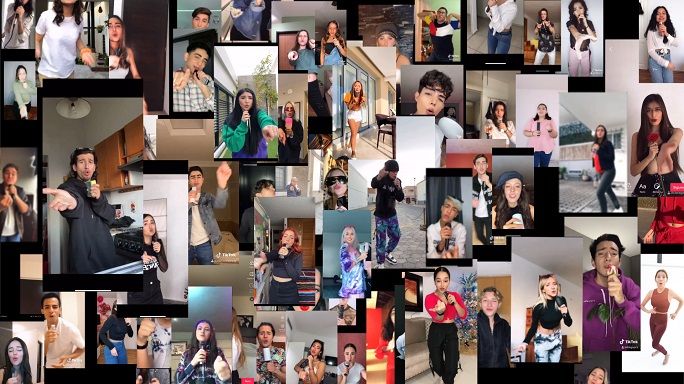 To celebrate the launch of Selena: The Series, Netflix LatAm organized an online record attempt for the most videos of people lip syncing the same song uploaded to TikTok in one hour, encouraging fans to participate.

The attempt took place on 3 December, shortly before the show’s premiere where hundreds of fans uploaded a video to TikTok lip syncing the song “Como La Flor” using the hashtag #TodosComoLaFlor.

To verify the record, two official adjudicators from Guinness World Records reviewed more than 500 videos uploaded to TikTok, disqualifying duplicates and those that did not follow the guidelines.

The final record was confirmed as 250 videos which demonstrates that Selena, more than two decades after her death continues to impact the lives of her fans with music that inspires joy and hope.

AstraZeneca – Most people in an online paper cutting video relay 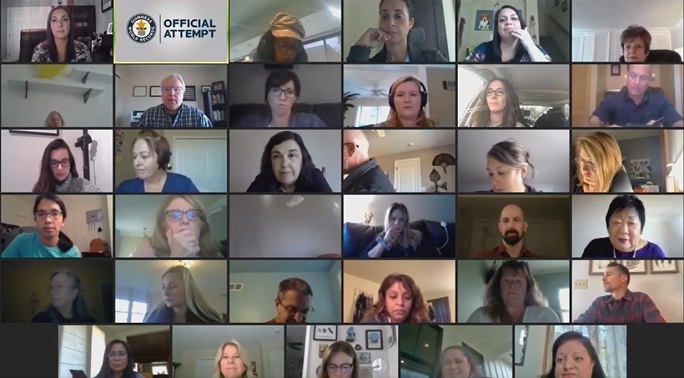 For its virtual Zoom meeting on 12 November, AstraZeneca US Oncology, Precision Medicine & Nurse Education (USA), invited its employees to partake in an epic record attempt for the most people in an online paper cutting video relay.

The record-breaking relay took 20 minutes and 30 seconds to complete where each employee cut their piece of paper into the shape of a circle once it was their turn to contribute.

Participants wrote personal or professional barriers they hoped to break in 2021 on the paper from which they cut their circle to symbolize the theme of the meeting, breaking barriers.

Throughout the attempt, colleagues cheered each other on in the group chat as they waited for the relay to conclude.

Once the final person in the relay finished their turn, an official GWR adjudicator confirmed the final count virtually as 54 people and announced the exciting news to all participants in attendance.

CONGRATS to everyone who joined us! ❤️👍 https://t.co/vcPWEtlqbl

For National Autism Awareness month that took place in April 2020, KultureCity was looking for a unique way to bring communities together to recognize sensory inclusion and raise funds to support children with Autism and their families during the global pandemic.

After connecting with GWR, KultureCity organized its “Stay At Home Race For Autism” event, which called on individuals from around the world to support in setting the record for the most people running/jogging online simultaneously.

The race took place on 26 April and was hosted via Zoom where 154 race-goers joined in to participate, including former presidential candidate Andrew Yang and his wife and KultureCity board member Evelyn Yang, Ken Jeong of “The Hangover,” Kelly AuCoin, Stephen Kunken, and Daniel Isaac of “Billions,” and many more.

KultureCity took to their social channels to celebrate with a video featuring their achievement and donated all event proceeds to children with Autism and their families.

*The current record holder of this title is VideoAmp, Inc. (USA) and it was achieved on 16 January 2021 with 162 people.

Each year, the Internet Marketing Association (IMA) hosts a conference to bring together leaders in the digital marketing space to discuss the latest industry trends and updates.

For its 2020 conference, IMA decided to take the event online and host a virtual week-long record experience for the largest attendance for a virtual marketing conference in one week to engage and excite attendees.

As attendees joined the conference 2 October, an official adjudicator monitored the count remotely to track results.

Once the full week passed, GWR reviewed the evidence and announced the final record count as 11,151 people, making IMA the latest record holder of this virtual attendance title.

How is your brand inspiring your audiences? Attempt to break a world record for brand awareness, a product launch, celebration, CSR, fundraising or employee engagement – Find out more here, or contact us for more information.