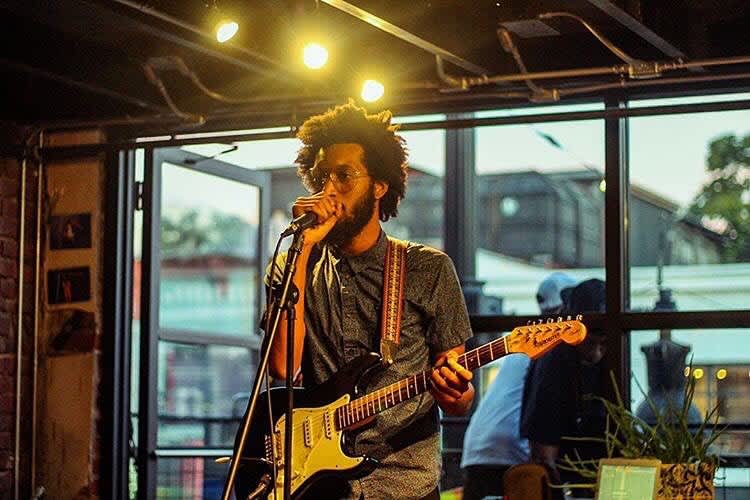 Black artist Bomani X has been one of the key innovators of voice-chatting app Clubhouse, and now, his face serves as Clubhouse’s app icon.

Clubhouse, a social media app introduced in March, allows users to gather in virtual rooms where they can communicate with one another through the mics on their iPhones.

Because the app requires an invitation, early participants were mostly from the communities around its founder and funders — basically, wealthy Silicon Valley venture capitalists and workers in the tech industry.

As a consequence, the app heavily centered around conversations focused on tech and business, early users told CNBC. Think LinkedIn, but with audio instead of text.

But as the app has grown, people of more diverse backgrounds have begun to join, and the Clubhouse experience has changed dramatically.

In particular, the app has carved out a niche among Black users, who have innovated new ways for using it.

A few months ago you might’ve opened the app to a panel discussion on the future of artificial intelligence or the potential of Bitcoin. Now, you’ll still see the tech talk, but it’ll be alongside debates over the music of rappers DMX and 50 Cent or the latest happening in the NBA. Nowadays, you can find folks shooting their shots in dating rooms, cracking jokes in virtual comedy clubs, talking about the latest celebrity gossip or having musical jam sessions with their friends.

“That ingenuity is the other side of being oppressed. At the end of the day, that’s the thing that unites Black people,” Williams said. “Being a have-not forces you to think and see the world differently, and it makes Black people naturally creative and creators in ways that they’re not even trying. It’s just the way that they operate.”

From background guitar to ‘The Lion King’

Several Black users of the app told CNBC that they began to join in May and July. That was after Clubhouse secured a funding round from the firm Andreessen Horowitz that valued the company at approximately $100 million.

The funding allowed the app to keep expanding, but it also gave Clubhouse two critical allies who helped diversify its user base.

Felicia Horowitz, wife of investor Ben Horowitz and the founder of the Horowitz Family Foundation, and Chris Lyons, managing partner at the firm, both played key roles in inviting “heavy hitters” to Clubhouse, said Williams, who joined the app in July. Both are Black.

Aniyia Williams, founder of Black and Brown Founders, was among early Clubhouse users, joining the app in July.

“Clubhouse has done an incredible job of embracing the Black community as investors in the platform and helping us build a community on the platform,” Horowitz told CNBC.

Harold Hughes, a startup entrepreneur in Austin, Texas, joined the app in May. When Hughes joined, he noticed that there were often only one or two active rooms, but as more and more Black users joined the app, the number of rooms started to grow and so too did the creativity within those rooms. While rooms during the day focused on business and tech, more rooms began to open up late at night that were less serious and more playful.

“It’s been really interesting to see how Black creatives on the app have taken what exists and using it in unique and creative ways to further engagement with their audiences,” said Hughes, who founded a group known as the Black Founders Club on Clubhouse.

This included rooms where folks were just singing. Among them was Bomani X, an artist who was stuck at home in the middle of the pandemic, trying to figure out how he could continue to approach his art while isolated.

Bomani joined the app in July, and as he got comfortable with it, he started to change how he used Clubhouse. First, he began to play his guitar in the background of the conversation rooms he joined. Then, he stopped talking and just started playing, creating rooms for solo concerts or playing with other musicians. Bomani also founded The Cotton Club, a group within Clubhouse.

His experimentation with the app culminated last month when he teamed up with Noelle Chesnut Whitmore, a music marketing executive, and other users to produce a Clubhouse version of “The Lion King.” The voice actors used the app to reenact songs from the movie and the musical, and it became a huge event on the app. They put on the musical twice, and both times, the Clubhouse rooms hit their maximum capacity of 5,000 almost immediately.

“It was putting the time and energy in to really create a moment and bring joy to the Clubhouse community,” Bomani said. We showcased “that this audio space can be used for not just conversations but also unique experiences.”

You’re either there, or you miss it

Clubhouse has a number of unique features that Black users have found alluring, said Melissa Brown, a Stanford postdoctoral researcher who specializes in Black digital life.

The app requires users to connect their accounts to their iPhone numbers, and users of the app go by their real names, use an actual photo of themselves, and write a bio. This makes it nearly impossible for anyone to be anonymous.

The use of photos is critical because it quickly gives users a sense of who is in the room. For Black users and allies, opening a Clubhouse room filled with other Black users may make them feel welcome. Conversely, someone who isn’t comfortable around a large group of Black people might filter themselves out, Brown said.

“People are very aware that if you’re going to be in clearly named Black spaces, you have to be invited,” Brown said.

Users are also able to write open-ended bios about themselves. For Black users this can include their affiliation with organizations such as Black fraternities or sororities, Brown said.

“Being able to signal Blackness offline and using it as a proxy online creates a density in the Black online social sphere,” Brown said. “It’s the fact that these dense networks exist that predispose Black people to amplify each other.”

Another critical feature is the fact that the audio from rooms is not saved. When people gather, it’s essentially a one-time only event — you were either there or you missed it. That makes it possible for Black artists to create without worrying that what they make could be stolen without credit, as is often the case on other social apps. TikTok, for example, makes it very easy for users to appropriate audio or dance moves from a Black person and use it to their own benefit without citation. That is a form of Black erasure, Brown said.

“Unless the technology forces you to give credit to the original, there’s no incentive to do so,” Brown said. “It’s always Black people who have to say ‘Hey, we did this first. Hey, this is our original idea.'”

An app with a face

Besides “The Lion King,” Bomani has also left his mark on Clubhouse in another significant way. As of Jan. 9, 2021, when you go to the App Store and search for Clubhouse, you’ll see a photo of Bomani and his guitar as the app icon.

Clubhouse uses members of its community as its app icon, switching the photo every few weeks. Bomani is not the first Black person to grace the app icon, but he was the first one to do so since the app joined Apple’s App Store in September, he said. Bomani’s presence on the icon immediately signals to Black users that this is an app where they are welcomed, and it stands in stark contrast to that of other social apps, like Twitter which uses a bird or Snapchat which goes with a ghost.

“Bomani has used his creative ingenuity to build community on Clubhouse from the moment he arrived,” a spokeswoman for the company said in a statement. “Users can often find him in a room practicing his guitar, keeping a tight door at the ‘Cotton Club’ or creating new musical experiences with other creators.”

Bomani said he has grown to appreciate his inclusion on the app icon, understanding how important representation matters in the tech industry. He’s also heard from other users who have told him they only accepted their Clubhouse invite when they saw his face on the icon.

“Seeing how much their action of putting me as the app icon also reflects the community and the culture that is pushing a lot of the innovation, I appreciated it,” Bomani said.

However, there are those in Clubhouse’s Black community who wonder whether the company’s relationship with their Black user base is genuine or just pandering.

“It’s great that they’re recognizing [Bomani], but it’s still a cosmetic change,” Brown said. “Hopefully this means that we won’t see differential censorship against Black rooms or not enough Black people being hired at the executive level or engineering roles.”

“Clubhouse is being built for everyone and we are intentional in cultivating and maintaining diversity and inclusivity within our team, investor base and advisors as well as the growing community on Clubhouse,” the spokeswoman said in a statement.

Founders Paul Davison and Rohan Seth, however, are noted for being active participants on the app and holding weekly rooms where they welcome new users as well as take feedback from the community. That feedback is often taken into consideration as the company develops updates, and the feedback is credited in the app’s publicly listed build updates.

Harold Hughes, a startup entrepreneur in Austin, Texas, who founded the Black Founders Club on Clubhouse.

“Specifically to the Black audience, we’ve been trying to figure out how to stay more connected with them,” Hughes said. “I do think they’re listening. I just think they haven’t gotten to the point where they’ve got a dedicated person in our community saying ‘Hey, how are we able to support the Black community?’ But I’m willing to give them the space to figure that out.”

Some users, however, have remarked that not all feedback is treated equally. Feedback that lends itself to driving the app’s growth or building new features seems to take priority over feedback that serves to help the app’s marginalized users from racism, sexism, homophobia and other real-world issues, Bomani said.

As Clubhouse continues to grow, Black users of the app hope the tech company will continue to build their relationship with their community and recognize their contributions.

“I think they can do a better job, but I don’t know what that job looks like,” Bomani said. “But there’s a lot of conversations that we have as a community about our role in social media. We always get the short end of the stick by creating the culture and pushing the popularity of these apps and platforms but not always having an equal share in equity.”