Most of our readers are probably old enough to remember the days when CRT televisions and computer monitors were frequently seen sitting by curbs, abandoned by consumers who had upgraded to the newer and superior flat-screen technologies. For our younger readers: a CRT video display had a convex glass screen, it tapered towards the back and was about as deep as it was wide, and it usually had a couple of knobs on the front. 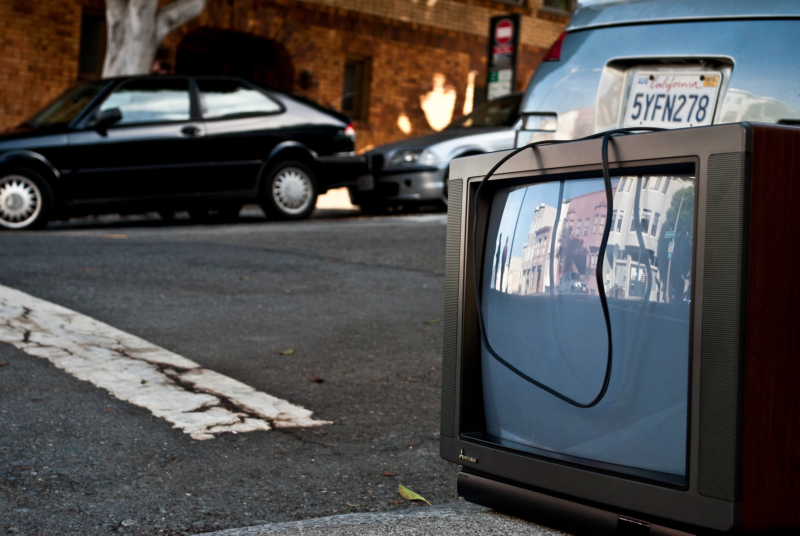 For a few years, CRTs littered driveways and dumps all over the world, and you may have felt sorry for the poor little things, unwanted and unloved, sitting out in the rain, after so many years of faithful service. But the CRT had its day. The first were manufactured in the 1930s, and by the mid-1990s, some 160 million were sold every year. In the 2000s, flat-panel displays steadily dropped in price, and at a certain point, the market for CRT displays disappeared almost overnight. The last known manufacturer of CRTs gave up the ghost in 2015.

New technology replaces old all the time, but rarely in history have we seen an old technology become worthless in such a short span of time. Usually there’s a years-long transition period during which the old stuff is traded at flea markets and on eBay, and often the obsolete products hang on in certain economic or geographic niches for decades (incandescent lightbulbs are still on sale at dollar stores). That didn’t happen with CRTs. The flat panels were superior in every way, and once they became cheaper than CRTs, the resale price of the latter quickly dropped to zero.

Could something similar happen with internal-combustion-engine (ICE) vehicles? Certainly, once electric vehicles reach price parity, which is expected to happen within the next couple of years, it will be extremely hard to make a case to buy a fossil-fuel burner. Who would choose to accept higher operating costs, inferior performance, less interior space and more noise, all while helping to fund air pollution, climate change, war and genocide?

And there could be an even bigger killer app coming down the road: the opportunity to actually earn income from your vehicle. Driverless robotaxis and/or vehicle-to-grid applications will transform cars from money pits into revenue generators. It’s anybody’s guess when these innovations will start to catch on, but they’re both game-changers. If you could buy a new EV, and use it to earn enough income to make all or part of your car payment, then it would be madness to continue paying for fuel, insurance and maintenance to hold onto a gas-burner.

So, when will we start seeing rows of abandoned dinosaur-burning SUVs and pickups gathering rust by the roadsides? Well, as much as some of us would like to indulge in some automotive schadenfreude, in fact there are several differences between ICEs and CRTs.

First, the transition to a new video technology was an easy one for everyone to make. Generally speaking, the manufacturers of CRTs were the same companies that developed flat-screens, and that continue to sell them today. They had little in the way of stranded assets to worry about, and thus little motivation to try to keep customers buying CRTs. Likewise for consumers, there was no learning curve involved in replacing their CRTs with flat-screens — just better picture quality and more desk space. Once the superior technology became cheaper, there was no reason for sellers or buyers to cling to the old.

That is far from the case when it comes to automobiles. Electrification is forcing a total restructuring of the industry — automakers are redesigning factories, laying off whole classes of workers and scrambling to hire others, rushing to build new supply chains, and facing the fact that large areas of their business model (dealerships, maintenance) may be superfluous. The need for billions in investment is plain, and the prospect for profit is anything but.

Furthermore, the transition to EVs has been led, and will continue to be led for the foreseeable future, by a single company that didn’t exist 20 years ago. As the legacy automakers struggle to break even on their sales of electric vehicles, Tesla is earning massive margins, and innovating at a pace that the old guard can’t match. Rather than fight a losing battle to “catch” Tesla, the more backward-looking auto execs are more inclined to try to spin their ICE sales out as long as they can.

Another little difference between video screens and cars is that the former are all powered by the same electricity (they even use the same power cables). The advent of the EV means the end of the Oil Age, and the global oil companies just happen to be the richest and most powerful entities that have existed in human history — more powerful than any automaker or any government. They aren’t sitting idly by watching their business model disappear. On the contrary, they are buying politicians, spreading misinformation in every form of media, and even developing whole new industries (hydrogen, carbon capture, plastics) in order to insure that demand for their products stays strong.

Unlike the transition from one kind of video screen to another, the transition to electrified transportation will be one of the largest technological shifts in history, and it is already having ramifications in every sphere of human endeavor — economic, geopolitical, military, environmental, social — you name it. There are many groups that have strong reasons to keep gas-burning vehicles around, some with little connection to the oil or automotive industries.

Genies don’t go back into bottles, and the new technology means electric vehicles will triumph in the end, but the enemies of the future are sure to fight a long and determined rear-guard battle. So, while the analogy between CRTs and ICEs is a fun one, it’s highly unlikely to prove an accurate one. The transition to EVs will be long, gradual, uneven, and for many, painful.

Photo by Aleks Dorohovich on Unsplash.

Have a tip for CleanTechnica, want to advertise, or want to suggest a guest for our CleanTech Talk podcast? Contact us here.