WILMINGTON – The Network for Entrepreneurs in Wilmington (NEW) celebrated its 7th anniversary with a sold-out event on Tuesday. Just hours before the event, the Port City received a timely celebration gift: a ranking on StartupBlink’s list of the best global startup ecosystems.

No. 1 on the list was Cambridge, United Kingdom—making Wilmington the No. 1 startup ecosystem of its size in North America.

Thom Ruhe, President and CEO of NC IDEA, was among the nearly one hundred people who showed up for NEW’s sold-out anniversary celebration Tuesday.

“The whole state should be excited about what’s happening in Wilmington,” said Ruhe. “Wilmington is becoming yet another vibrant ecosystem, among a few others in the state, that, collectively, is elevating the profile of North Carolina to be the best state in the nation to start and grow companies of high impact.”

Report ranks Triangle 16th as startup hub in US; Wilmington No. 2 among similar sized cities across globe

NEW was one of 15 regional impact partners to receive an ECOSYSTEM grant from NC IDEA in 2021. NC IDEA has also supported NEW with its ENGAGE grant program.

“There’s a lot of hype in the different cities that say they have an ecosystem starting up,” said Reeser. “But in Wilmington, we have bonafide unicorns that started here. We have a number of really promising companies that are getting validation from the National Institute of Health, and from the banking industry, and they’ve proven to have chops.” 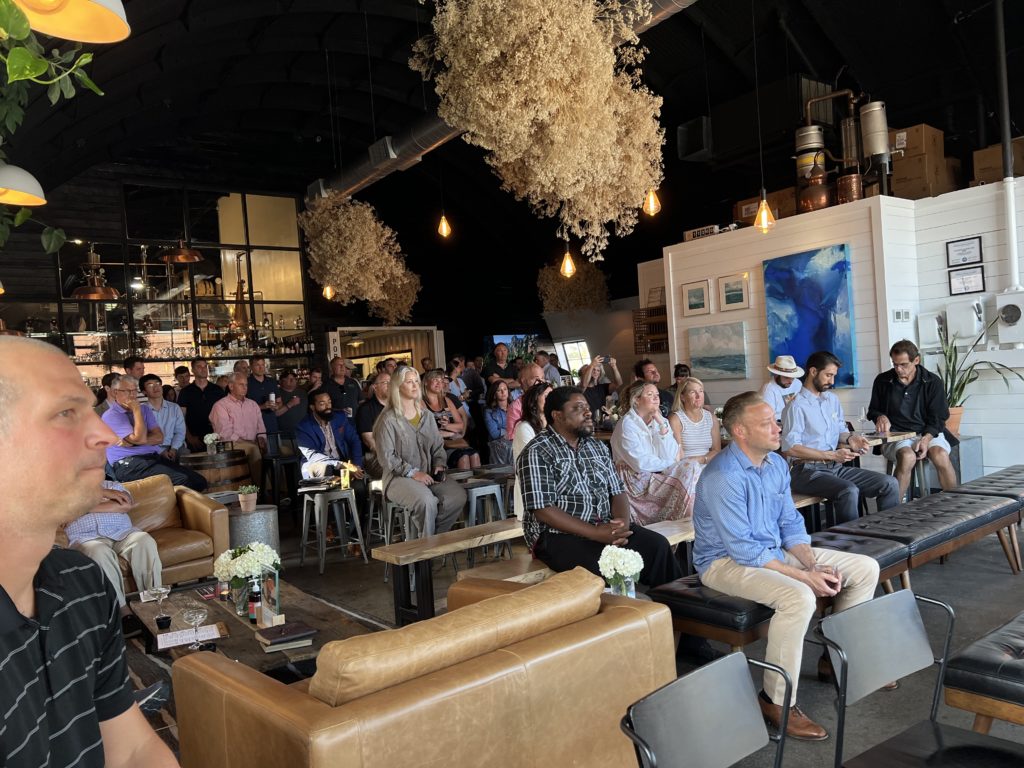 opiAID was in the sixth cohort of the RIoT Accelerator Program (RAP). Tom Snyder, Executive Director of RIoT, was also in attendance at Tuesday’s event. Snyder commented on Wilmington’s status as an entrepreneurial ecosystem.

Both speakers have a tie to Wilmington. Prevost’s son, Smith Prevost, has opened The Butcher’s Market on Oleander Avenue.

“This is my second time being at NEW,” said Lee Prevost from the stage. “It reminds me a lot of…  our counterpart in the Triangle, CED. That’s the equivalent to NEW.”

He mentioned the “palpable excitement” over the recent rankings and compared that to the early days of CED.

“It reminds me a lot of, kind of, the energy that you have here right now,” said Prevost.

Phillips completed her undergraduate degree at UNC Wilmington. She said that the investor network in the Triangle is “very collegial”, and that she’s happy to see Wilmington “grow in the same way.”

“And we hope that we can connect even more,” said Phillips from the stage, “because, at least for the Wolfpack Investor Network, we know two of our main markets for investors and companies are Wilmington and Charlotte, so we’re doing our best to connect more of those in both of those areas.”

“So much support, funding, connections, mentorship—CIE has been wonderful to us,” said Reeser. “UNCW’s wrapped their arms around us too. And we’ve collaborated with their researchers who helped us apply for funding from the federal government because we had top talent from us UNCW on our team in advising.” 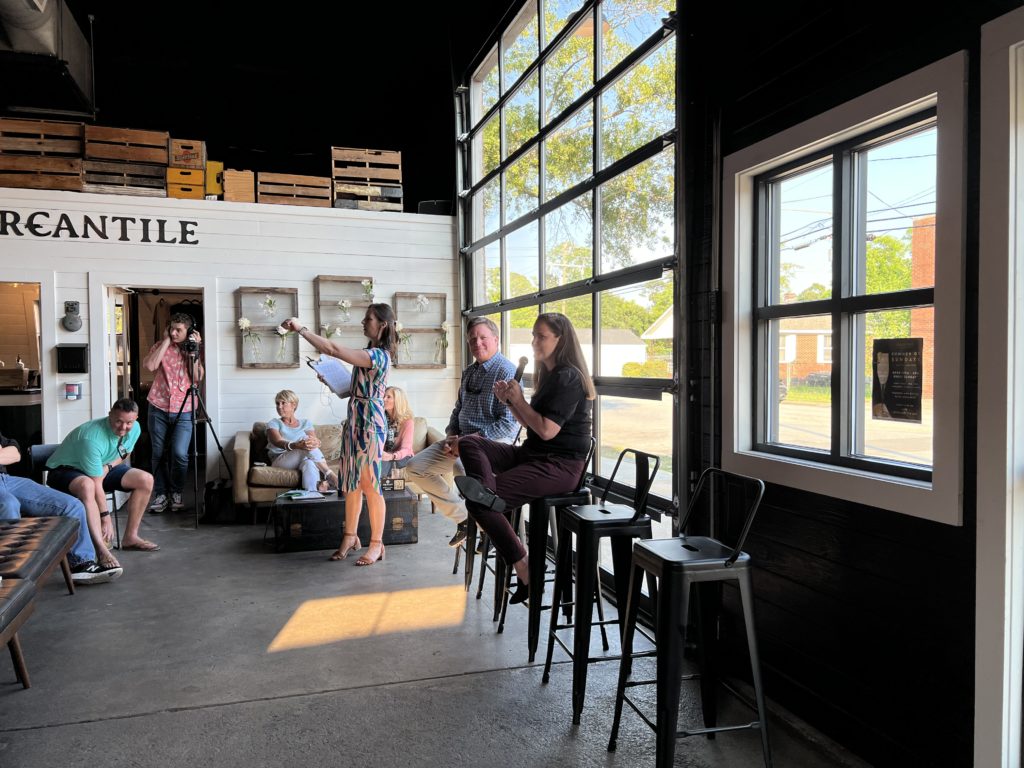 WRAL TechWire contributor Sarah Glova leads a discussion at the NEW event in Wilmington on May 31. (Photo courtesy of Jim Roberts)

He also referenced Jim Roberts, founder of NEW and of the Wilmington Angels for Local Entrepreneurs (WALE).  Roberts was also the founding executive of the UNCW CIE, launching the program in 2013.

“Jim is willing to stick his neck out, and a lot of folks will not do that,” said Reeser. “And for that reason, I think what he’s created here is unique, and has given the opportunity, to companies like opiAID and others, to really get in front of the right people to take you to the next step, or to identify the obstacle, the blind spot, or just put a little gas in the tank, so you can go just a little bit further, until you get that place where you can rest and set up shop.”

Rising UNCW sophomore Carson Jackson, also a startup founder, said that NEW should receive credit “for pioneering this burgeoning of support in Wilmington.” His startup, a company called ☆NA (pronounced “Star-N-A”), previously known as MacroFormulation, participated in this year’s NC BIONEER Venture Challenge. Jackson said that he has benefitted from supporters like Roberts.

“I am incredibly thankful for all of the effort he puts in for startups like ours,” said Jackson. “I have had to travel to RTP for the majority of venture-related events, however, some are starting to be held in Wilmington.”