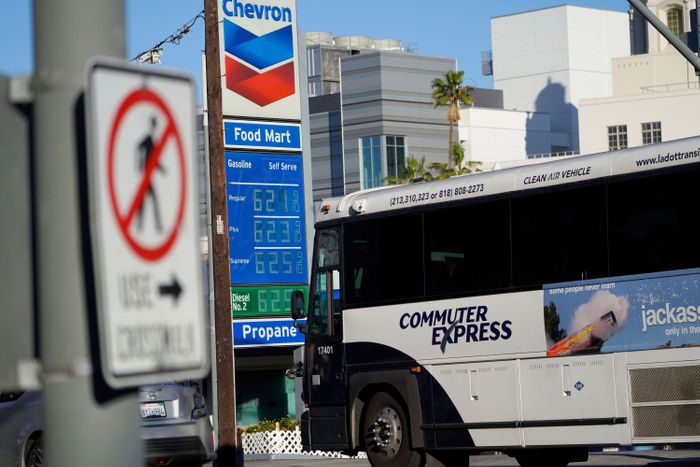 Right now in California, a gallon of gas costs $5.74, which makes Nebraska’s $3.89 feel downright cheap. The national average is $4.32. The oil industry is calling for an increase in domestic drilling, while Democrats and Republicans alike have proposed gas-tax holidays and driver subsidies. None of this is exactly new: Oil shocks are recurring (and largely embedded into society at this point), and so are the myopic and self-serving responses of politicians. When asked about high gas prices last week, Joe Biden responded that “defending freedom is going to cost” because he “can’t do much” about them.

Here’s something he could do: Pay people to get rid of their cars. Statistically, most Americans already live in a densely populated city, where the main barrier to a relatively car-free existence is the absence of safer and more reliable alternatives. And the distances Americans move every day aren’t actually all that long: About 60 percent of all vehicle trips in the U.S. are six miles or less, and in cities, about half of all vehicle trips are three miles or less. A federal buyback program for gas-guzzlers would be just one piece of the urgent, necessary work of decentering automobiles from American life — a just transition away from our cars — but it’s a surprisingly achievable one.

A timely new report out Monday from the Green New Deal’s policy arm, the Climate + Community Project and the McHarg Center, lays out a framework for dramatically decarbonizing a typical American’s daily coming and going by 2030. It goes like this: Give people attractive alternatives to their solo commutes — people in the U.S. mostly drive alone in vehicles that emit 29 percent of U.S. carbon pollution with the highest per capita transportation emissions in the world — and help them dump their cars. More specifically, the report proposes we increase transit ridership fivefold by boosting service, prioritizing buses, and investing in good-paying transportation jobs; set up 10,000 miles of protected bike paths with bike-storage facilities designed for workers; and build out a nationwide network of accessible sidewalks and walking trails with a focus on universal ADA-compliant infrastructure. (Here’s how the math pencils out.)

Compared to proposals like colonizing a second planet or tunneling car holes under every major U.S. city, this is easy (and relatively cheap) work; the infrastructure itself could be built much sooner, too. This strategy also offers something subterranean vacuum-tube highway pipes do not: the promise of connecting with our neighbors and finding joy in our commutes. “London created a congestion-pricing program that was really focused on revenue and did, in fact, raise money and did reduce congestion,” Yonah Freemark, the report’s co-author and a senior research associate in the Metropolitan Housing and Communities Policy Center at the Urban Institute, told me. “Paris didn’t do that at all but rather shrunk streets massively all over the place and added a lot more bike and bus lanes to a much larger degree than London.” Both cities saw an increase in transit ridership and cycling, he says, “but Paris’s was actually larger.”

While it’s true the Biden administration has plans to eliminate transportation emissions faster than ever before — electrifying the federal fleet, proposing stricter tailpipe regulations, and hinting at phasing out sales of gas cars — the current targets are too far in the future and depend almost exclusively on the idea that most Americans will be buying themselves an electric car and have access to a charger. This is not only problematic from an equity perspective; it will also be wholly insufficient. “Electrification is only worth it,” says Freemark, “if we actually reduce the amount of miles driven on our roads and the amount of sprawl occurring in ecologically sensitive areas.”

This is where the car buyout comes in. Instead of the complicated tax rebates or means-tested incentive structure being proposed to purchase EVs, Freemark came up with a universal, sliding-scale $300 billion Clean Mobility for Clunkers program to allow the trade-in of gas vehicles for a credit toward a new or used electric car, e-bike, mobility share — an annual subscription for a bike or scooter share, EV rental, or ride-hailing program — or transit pass with deeper discounts offered based on vehicle weight and size. This would better reflect consumer behavior; as of last year, e-bikes are outselling electric cars. And that program would be on top of a universal $300 per-person credit that would allow anyone to buy a new or used bike. (Kids would get a renewing credit every four years.)

These initiatives would not only offer families more choices very quickly, they would also start to counteract 120 years of pouring trillions of federal dollars into roadbuilding. “In the application of this mandate to provide roads, the behaviors done to do so were often racist in nature — and specifically racist against Black communities,” Kristen Jeffers, creator of the Black Urbanist, told me. “If there’s this congressional mandate for roads and a similar one doesn’t exist for other modes of transportation, as well as for continued emphasis on racial equity, then all we will get is road funding, and road funding will always be funded more and with more provisions than other funds.”

The part of the plan addressing already dense cities is straightforward, but there are still tens of millions of people who depend on those roads — many of whom were priced out of cities, lengthening their commutes — and can’t easily transition away from their cars. “A lot of people, especially low- to moderate-income and people of color in those communities, need roads, and we also have a lot of suburban low- to moderate-income and people of color who rely on their cars,” says Carlos Martín, the David M. Rubenstein fellow at Brookings Metro. “The transition for them is going to be a challenging one.” But not impossible: Suburban communities can be built more densely, can add bus service, and can be better connected to rail. More people need to live closer to transit in a way that doesn’t further exacerbate displacement, says Laura Raymond, the director of the Alliance for Community Transit in Los Angeles. “It is critical to prioritize the needs of low-income families and communities of color who have historically been harmed by how the region has developed.”

We can see how some of this could play out in Boston, whose new mayor, Michelle Wu, ran on delivering a just and equitable transition to a zero-emission economy prioritizing the city’s lowest-income workers. Boston is dense and well served by rail systems, yet transportation still makes up about 30 percent of the city’s emissions. Part of that is due to Boston’s inequitable distribution of transit. The city’s Black bus riders spend an average of 64 more hours per year waiting for or stuck in traffic on buses than the city’s white riders. Households in communities of color spend nearly one-fifth of their incomes on transportation. These residents are doing the most work to lower the city’s carbon footprint yet are most likely to breathe the city’s worst air pollution. Just last week, in a step toward changing that, Boston eliminated fares on three major bus routes through some of these transit-dependent neighborhoods, creating what Wu calls a “foundation for reducing emissions, creating shared prosperity, and protecting public health.”

High gas prices are not an anomaly to be legislated around; they are, at least at a macro level, probably here to stay. “Every dollar that governments spend trying to slightly lower the cost of driving in response to those prices will be yet another subsidy to a wealthy, world-destroying industry that would be better spent on public transit, electric vehicles, and charging infrastructure,” says Billy Fleming, a founder and co-director of the Climate + Community Project. “There is no better time to chart a different path for America’s transportation future than now.” Instead of promising “relief at the pumps,” our leaders have an opportunity to offer Americans something else entirely: a reprieve from an unfair and untenable petroleum-powered, car-prioritized society — and, perhaps, a chance to maybe even look forward to our commutes.