The convergence of government’s legislative change and blockchain technology is going to revolutionize investing.

Those looking for funding are going to be able to access investors much easier, with far fewer fee-charging middlemen (banks and brokerages — watch out!).

This will enable company builders to focus more on development instead of constantly searching for funding.

This comes from Cody Shirk, our venture capital expert. In his latest issue of Venture Capital Digest, Cody detailed this intersection of private investing and technology.

It’s fascinating to see where “Web3.0” is taking our world, and thrilling to know that we can be part of the funding behind those coming technologies – potentially making lifechanging wealth.

As Cody highlights in his update, Meta (formerly Facebook) was first funded by a private investor named Peter Thiel. Thiel’s $500,000 seed capital turned into over $90 billion as Facebook grew from a tiny private company to a massive, publicly-traded juggernaut.

Those days are over.

Thanks to the JOBS Act, individuals now, regardless of their background, have access to some of the most lucrative investment opportunities available through equity crowdfunding.

And as our financial system shifts towards blockchain technology, the floodgates are about to open…

Today, let’s examine the intersection of venture capital and technology, and how your place at its cutting-edge could mint you a fortune in coming years.

Before we jump in, for newer Digest readers, Cody is a veteran venture capital investor who’s done deals all over the world, resulting in a growing list of 1,000%+ venture capital winners under his belt.

In his free newsletter, Venture Capital Digest, he shares tips and tricks to private investing… trends he’s tracking… even deals that catch his eye. Cody’s Digest is a fantastic way to keep a finger on the pulse of the venture capital world.

The 2012 JOBS Act created new opportunities for private companies to raise capital. Two of the most notable changes were the introduction of Reg CF and Reg A+ offerings…

Prior to the JOBS Act, to participate in private investments, investors had to prove a certain level of income and/or liquid net worth ($200,000 annual income or $1 million net worth, excluding primary residence).

These requirements excluded most of the population from participating in early-stage private investments (also known as venture capital).

But as noted earlier, this has now changed.

***One of the earliest platforms that enabled crowdfunded, venture capital investments was Kickstarter

Through Kickstarter, companies raised money from private investors, called “backers.” These backers didn’t receive equity. Instead, there were other incentives.

Cody points toward Peloton and Oculus as examples. The original Kickstarter campaigns for both companies gave early backers actual product instead of equity.

Kickstarter still works this way, meaning “no equity.” But it appears things are evolving.

Although Kickstarter still only offers the ability for backers to support startup projects through “pledges,” the platform is about to launch a new feature that will likely be the future for Reg CF and Reg A+ offerings.

Starting this year, Kickstarter will transition to a blockchain-based platform that should enable much more scalability and options for those looking to launch projects and those looking to back them.

Here are additional details from Bloomberg:

Kickstarter plans to unveil a project that will merge the two worlds.

It’s hatching a standalone company to build a crowdfunding system much like Kickstarter’s but based on blockchain technology….

Today, money that might have once gone to Kickstarter campaigns is flowing through blockchains into what are known as distributed [decentralized] autonomous organizations, or DAOs.

***What are DAOs and how do they fit into venture capital crowdfunding?

As the name implies, there’s no central authority. It’s a collection of individuals, pooling resources for a shared purpose. These individuals can do this without central authority because of open-source code written on the blockchain. These rules are enforced by the network of computers running the DAO’s shared software.

Cody calls them “the blockchain equivalent of a Kickstart project…only much, much better.”

But as Cody also points out, a DAO is difficult to understand from a dry definition such as the one I just provided. An example is more illustrative.

Here he is explaining using a DAO called “LinksDAO”:

“(LinksDAO’s) mission is to “create the modern golf and leisure club” and “reimagine the country club.” 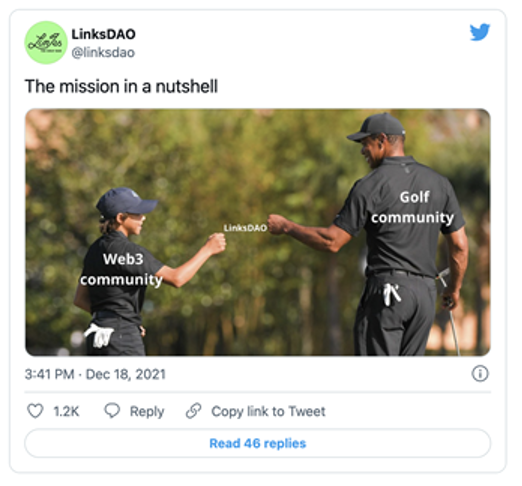 In early January, “the public minting of LinksDAO’s two NFTs — the Leisure Membership and Global Membership — sold out in mere hours, generating $10.5 million in funds from a collection of 9,090 NFTs.”

These two different kinds of NFTs will allow holders access to the eventual golf courses that LinksDAO plans to purchase. LinksDAO’s native token, which you can invest in right now, is called “LINKS.”

By moving to the blockchain, investors will now have more than just a promise of future product. They will have stores of value in cryptocurrencies or tokens linked to real-world investments, all on a decentralized platform!

***How to begin to take advantage of all this

Cody writes that the future of all investing will be completely blockchain based.

Given this, what’s an important action step?

Well, take some time to learn about this world – not tomorrow, but today!

And then endeavor to learn more tomorrow, then the day after that.

This means diving into cryptos, NFTs (non-fungible tokens), DAOs, how to open various accounts and transfer small amounts of money, how to sign up for crowdfunding platforms and research investment opportunities…

Just begin to dip your toe into this world, because this is the world that’s coming.

We’ll continue to bring you Digests on all these concepts in the days to come, but there’s nothing like diving in yourself.

***In a moment, I’ll give Cody the final word, but a quick administrative note

To streamline our services, we’re blending the Private Deal Group into Venture Capital Investor. Cody will track the existing investments from Private Deal Group, while bringing you new opportunities going forward. So, keep your eye out for all the great content that’s coming.

Returning to today’s topic, here’s Cody to take us out:

The next step is for you to act, so you can be a part of this revolution.

I recommend that you familiarize yourself with cryptocurrencies… ASAP.

Now, I don’t mean that you read about them and research them (although that’s a great idea too!) …

I don’t even mean that you need to buy large amounts (although that might not be a bad idea either!) …

I mean that you should open an account and start purchasing, trading and transacting with cryptocurrencies.

You can use a very small amount of capital. The goal is to get comfortable with how it all works and to feel confident that you can exchange value on the blockchain.

The easiest way to do that is to open an account with Coinbase or Crypto.com. There are many other options out there, but those two are user friendly for beginners.

Personally, I see this as an extremely exciting time, as true capitalism can come back to our economies. A system where there is a level playing field to allow the hardest workers with the best ideas to succeed… and where the investors who take risks to back those entrepreneurs can succeed as well.

Have a good evening,