Monique Villa is an investor at Mucker Capital, an early-stage VC fund investing in startups across the U.S. and Canada. She is also the co-founder of Build In SE, a community of founders, funders and ecosystem partners committed to company building in the Southeast (#BuildInSE).
More posts by this contributor

The wave of venture capital interest in geographies other than Silicon Valley has been building momentum over the past 5+ years. If you measure capital flow by Twitter chatter alone, you may assume the tidal wave is about to break and checks are being doled out via T-shirt launchers repurposed from hockey games.

Meanwhile, VCs will approach founders saying, “We are now looking into markets beyond Silicon Valley.”

When Mucker launched back in 2011, our founding partners, who had left Silicon Valley for LA, set out to prove that high-growth companies can be built anywhere. Our portfolio from this past decade is a testament to this very narrative. With offices in LA, Austin and Nashville — and investments all over North America, we are seeing a marked increase in receptivity to an idea we had over a decade ago to invest across the U.S. and into Canada.

As of late, I’m receiving more and more outreach from VCs based in San Francisco, New York and beyond interested in deal flow here in Nashville and the Southeast.

When we think about the opportunity beyond Silicon Valley, we are really speaking of America.

In reality, there will be some lag time before the checks being written by these same VCs are consistent with both the outward hype and existing market opportunity. The broadened geographic focus of VCs for marketing purposes and FOMO is not adequately capturing the real narrative.

In short: When we think about the opportunity beyond Silicon Valley, we are really speaking of America.

America is the opportunity and we are worthy of investment, aren’t we?

“We” is a loaded declaration. I write this as a venture capitalist and also as the biracial daughter of a first-generation immigrant, with both of my parents growing up poor by most people’s standards. One branch of my family immigrated to the U.S. from Mexico during the Mexican Revolution, the other harkens back to rural Oklahoma. The founders I meet day in and day out in the Southeast oftentimes tell a similar story.

My story is that of the average American, and yet feels light years apart from what people perceive as the “innovation economy.” Many of the people I’ve met in venture capital this past decade come from prestigious lineages with parents and grandparents who may have never associated with mine. And yet, here we are. This is America.

While Silicon Valley’s origins and climb to international stardom center around a collection of innovators, attracting more innovators and capital as the decades passed, one critical element arguably fell by the wayside — America as an expansive and diverse collection of states and people. Annual reporting on where venture capital dollars flow supports this discrepancy, with the majority of funds being funneled into companies based in and around Silicon Valley. 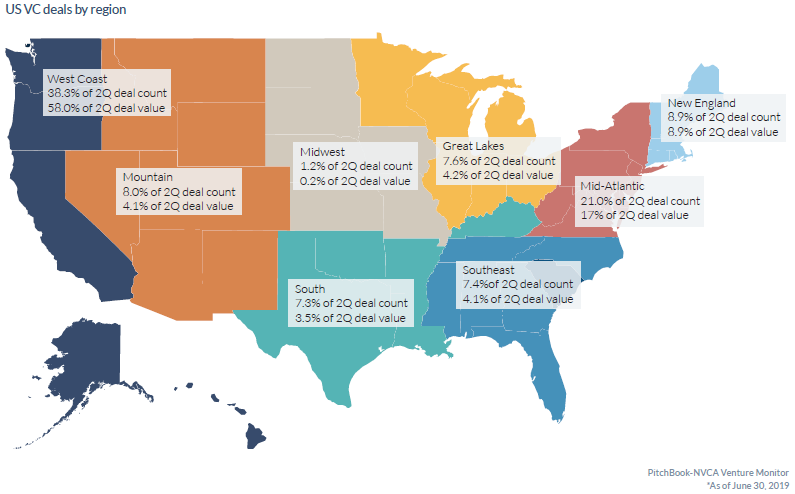 We find ourselves at the threshold of a decade where America will be rightfully recast as the land of opportunity for VC dollars to flow into the products and services fueling America’s future. And, at the helm of such innovations needs to be the people closest to these market opportunities, in full alignment with their customers and the nuances to best serve them.

In a post-COVID world, customers have never demanded more transparency into supply chains, workplace culture and equity ownership. Customers are more informed than ever before, with a 24/7 info line on brands and a growing scrutiny on where to place their hard-earned dollars. In short, they demand to be seen, and the founders who recognize this are the ones thriving in this new climate.

Where do the customers live? I’ll give you a hint: They are largely not in Silicon Valley. 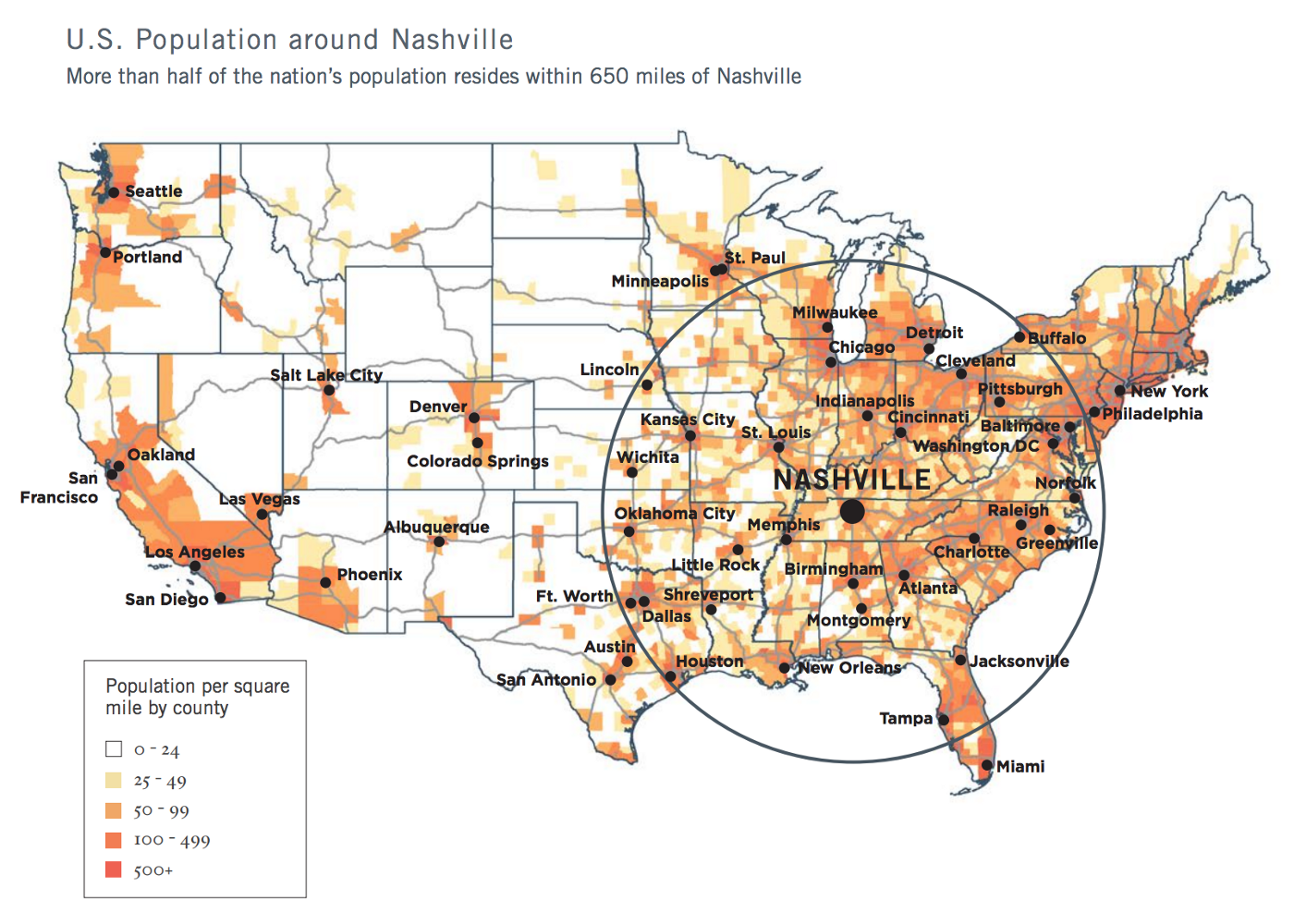 I wrote about the unfair advantage of Nashville back in 2018 when I announced the launch of Build In SE, a community I co-founded to support founders choosing to build their companies in the Southeast. Nashville is at the center of over half of the United States population within a radius of 650 miles, and within a two-hour flight of 75% of the U.S. market.

Customers come in all shapes and sizes, and founders with boots on the ground in these markets, wearing the same brand of proverbial boots as these customers, carry an unfair advantage. These same founders historically bootstrapped their companies out of need, as access to early-stage, high-risk capital can be scarce and vary widely city by city, state by state, industry by industry.

These same founders still built household name companies in the tech and innovation economy, including the likes of Mailchimp, Calendly, Lynda.com, and GoFundMe (their Series A valued them at $600 million pre-money). All of these companies have another thing in common — they were founded “beyond Silicon Valley.”

Talent as the stronger magnet

Another macrotrend at play is that of the increasing distribution of talent beyond traditional metropolitan strongholds like San Francisco and New York. Entrepreneurs, technologists and operational talent are lifestyle-seeking at a time in history when life feels all the more precious. Moving to cities like Nashville, Austin, Atlanta, Denver, Durham, Miami, et. al. means proximity to aging family members, affordable childcare and outdoor activities.

These simple pleasures were the tradeoffs people made when “pursuing their dreams” in coastal cities, picking up to move in pursuit of money (sometimes better weather). Seemingly overnight, capital abounds in the private markets just as talent becomes increasingly scarce and therefore valuable. The pendulum swung, and capital became the weaker of the two magnets; Wall Street began moving up Manhattan island toward coffee shops and dog parks when talent began to pose the question, “How long do I want my commute to be?” and “How much time do I want to reclaim for my family, and myself?”

2020 was the match to ignite this dry hillside. People trapped inside of cramped quarters with resources left to invest in a new life (or in other cases, left with nothing to lose) packed their bags for a new, up-and-coming metro.

For some, this comes with a newfound sense of community and belonging, as I experienced in 2017 when I moved from my lifelong home of Los Angeles to Nashville. In LA, my local neighborhood hardly knew one another due to the transient nature of the town. In Nashville, I became part of something greater than myself.

One of the big frustrations expressed by founders I know in markets like Nashville, Atlanta, the Research Triangle, Cincinnati and Toronto, is, “I keep hearing there is more capital available, but I’m not seeing it.” They will meet with investors, then be told they are too early, raising too little money, or too much, or not going after a “big enough market.”

Sometimes, one or more of these may be true. However, there are instances where these investor responses may be thinly veiled criticism of the perceived ability of the founders who might not sound, look or behave like Silicon Valley entrepreneurs.

Closing this gap of understanding between pattern-matching VCs of varying skill and startup CEOs across the country will require hard work in the coming decade. A big piece of this will require breaking bread as neighbors, with kids in the same schools, a shared affinity for the local greasy spoon and a mutual trust. This will be step one. Though really, it will require much more alignment and rigor around the very definition of America.

It is up to investors to capture this opportunity in the next decade. In fact, it is our job.