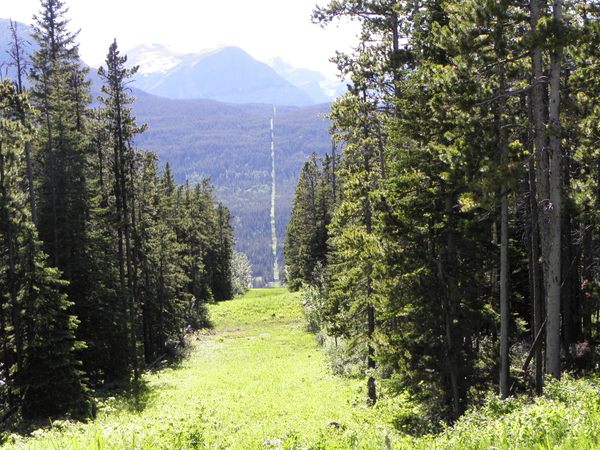 The United States–Canada border is the longest in the world. It stretches 5,525 miles from Maine to Alaska, traversing land, sea, and untouched wilderness. As such, you might assume this colossal border would be left untouched by humankind, merely an invisible line on a map. But you’d be wrong.

Every year, the average American taxpayer pays half of a cent to the International Boundary Commission (IBC) for the sole purpose of deforesting every inch of the U.S.–Canada border. With an annual budget of $1,400,000, the IBC ensures that the boundary will never be just an imaginary line.

Known as “the Slash,” this treeless zone is 20 feet wide and covers everything from narrow isolated islands to steep hillsides. Spanning national forests and towering mountains, the vast majority of the Slash is so remote that it will never receive any visitors (aside from a handful of bears), yet it is still painstakingly maintained every six years with grueling hours of exhausting manual labor.

The Slash was initially deforested for the sole purpose of, according to the IBC, making sure that the “average person… knows they are on the border.” It all started in the 1800s, when the western land section of the U.S.–Canada border was set at the 49th parallel. The Slash was cut and over 8,000 original border markers were laid down, most of which are still standing along with it to this day.

Unfortunately, there was no GPS system at the time, so the border markers were inadvertently placed in a zig-zag fashion, straying north or south of the official 49th parallel border by an average of 295 feet. The lack of sufficient cartography also led to irregular border cutoffs such as Point Roberts and the Northwest Angle.

Despite its errors, witnessing the Slash is still on the bucket list of hundreds of geography nerds worldwide. Seeing the Slash can be as simple as going to Google Maps, zooming towards the U.S.–Canada border, and switching to satellite view. Those looking for a more up-close view can travel to Newport, Vermont, and hop aboard Northern Star Cruises, which will take you right alongside the Slash.