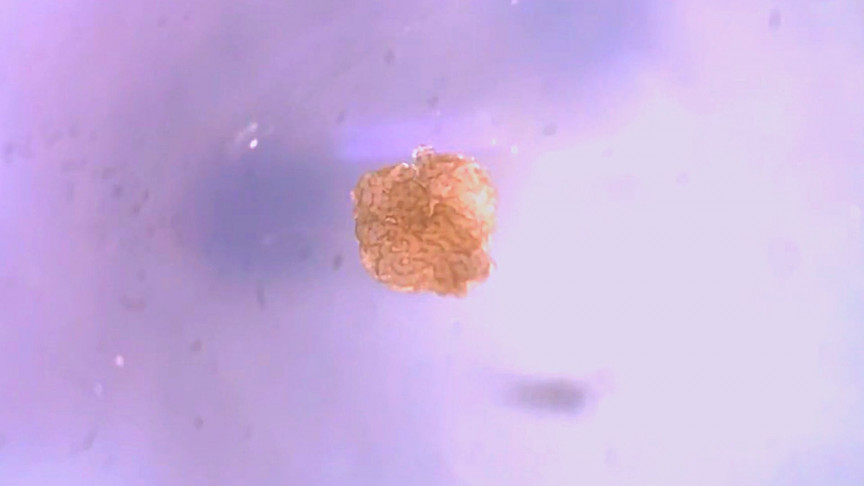 Last year, scientists created the first living machines by joining cells from African clawed frogs with tiny robots. One of them used sculpted cardiac cells to propel themselves along, push payloads, and even work collectively within a swarm of other “Xenobots.”

And today, the same research team announced the creation of life forms capable of self-assembly into a body from a single cell, according to a new study published in the journal Science Robotics.

The Xenobots can also move more quickly, navigate varying environments, and live longer than the first models — all while working in groups and healing if and when they’re damaged.

Compared to the earlier model of Xenobots (or, number 1.0) — where the millimeter-sized automatons were made in a “top-down” style via the manual placement of tissue, shaping frog skin surgically and including cardiac cells to create motion. But the new model of Xenobots employs a “bottom-up” engineering method.

The biologists based at Tufts University used stem cells from embryos of the African frog Xenopus laevis — which inspired the name Xenobots — enabling the tiny robots to self-assemble and grow into spheroids where some of the cells changed to produce cilia (or tiny hair-like projections) that oscillated to and fro, or rotated in a specific manner.

Instead of relying on manually-sculpted cardiac cells — which use natural rhythmic contractions to wiggle around an area — cilia give the new spheroidal bots “legs” capable of rapidly moving them across a surface. In frogs (or even humans), cilia are typically found on mucous surfaces like lungs — to assist in the removal of pathogens or various foreign materials.

However, for the Xenobots, little hairs enable rapid locomotion.

“We are witnessing the remarkable plasticity of cellular collectives, which build a rudimentary new ‘body’ that is quite distinct from their default — in this case, a frog — despite having a completely normal genome,” said Distinguished Professor of Biology Michael Levin, who is also the director of the Allen Discovery Center at Tufts University and a corresponding author of the new study, according to an embargoed release shared with IE. “In a frog embryo, cells cooperate to create a tadpole. Here, removed from that context, we see that cells can re-purpose their genetically encoded hardware, like cilia, for new functions such as locomotion.”

Xenobots subjected to hundreds of thousands of environmental scenarios

“It is amazing that cells can spontaneously take on new roles and create new body plans and behaviors without long periods of evolutionary selection for those features,” added Levin.

Xenobots are built much like traditional robots, explained Senior Scientist Doug Blackiston, co-first author of the study with research technician Emma Lederer. The difference with the new robots is the employment of cells and tissues instead of artificial elements to construct the shape and provide predictable behaviors.

Tufts scientists created the physical organisms, but scientists at UVM were busy executing computer simulations capable of modeling varying shapes of the Xenobots — to see whether they showed different behaviors either in groups or separately. The team used the Deep Green supercomputer cluster at UVM’s Vermont Advanced Computing Core to subject the robots to hundreds of thousands of random environmental scenarios — created by an evolutionary algorithm.

The simulations served to determine which Xenobots had the greatest capability to pool resources in swarms, and gather large piles of debris in a particle field. “We know the task, but it’s not at all obvious — for people — what a successful design should look like,” said Josh Bongard, a robotics expert. “That’s where the supercomputer comes in and searches over the space of all possible Xenobot swarms to find the swarm that does the job best.”

“We want Xenobots to do useful work,” added Bongard. “Right now we’re giving them simple tasks, but ultimately we’re aiming for a new kind of living tool that could, for example, clean up microplastics in the ocean or contaminants in soil.” The potential for robots of this size and with these capabilities is vast — especially since the new Xenobots can record information by changing color, like memory. But the little critters and their successors could eventually give insight into how multicellular organisms first arose from single-celled organisms, shaping information processing and decision making, and cognition in more complex organisms.

This was a breaking story and was regularly updated as new information became available.