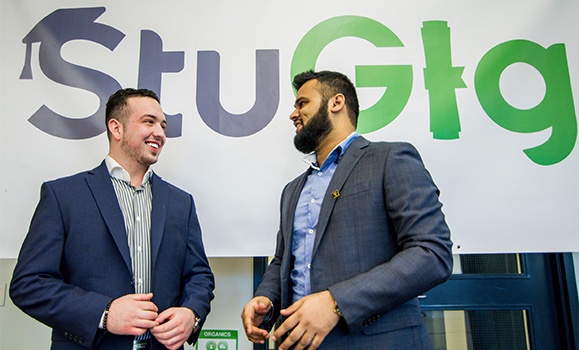 Benjamin Bright was fresh into his first year at Dal when he hatched an idea for a smartphone app. He had a problem, though: it was tough to find a developer to help him build it.

It’s not that there weren’t any skilled computer programmers in Halifax who might be interested in helping him out on the project. Rather, there simply wasn’t a clear path to connecting with them.

Ben finally tracked someone down after a few months of networking, but eventually ended up shelving the app project. It was taking too long to get results on the technical work.

Around this time, Ben, a Management student, also began working as a volunteer at ShiftKey Labs — a technology focused innovation sandbox hosted by Dal’s Faculty of Computer Science. There, he met other people facing the same problem he had had. There simply weren’t enough developers to meet growing demand from aspiring student entrepreneurs.

“I thought to myself, ‘I went through this pain of trying to find a developer. These people are asking for developers. There must be a problem here,’” he says.

On the flip side, Ben — who is from Montreal — had begun hearing more and more about Nova Scotia’s struggle to retain highly skilled youth in the province because of a shortage of career opportunities.

“There’s been a major uptick in the number of student-led startups at Dal over the past few years thanks to a variety of new initiatives, and StuGig stands to play a valuable supportive role on some of those ventures and others in the community at large,” says Stephen Hartlen, Dal’s assistant vice-president of industry relations and executive director of the university’s Industry Liaison and Innovation office.

By highlighting the talent on offer at Dal and in Nova Scotia, and enabling those individuals to gain some job experience here, Ben says there’s a greater likelihood they’ll stay.

“People come to develop their skills, but they don’t stay to use their skills,” he says. “We want to find that right medium to help facilitate a solution to that problem.”

Existing platforms such as Fiverr and Elance were already helping talented freelancers tap into the so-called “gig economy,” but the StuGig team saw value in creating an option exclusively for students without a lot of real-world experience.

“We want to give students experiential learning opportunities,” says Ben, who is heading into his fourth year in Business Management with a major in Entrepreneurship and Innovation. “That way they can build their resume and they can build more credibility to ultimately land the jobs of their dreams.”

Meanwhile, startups and other businesses get a completed task at a prorated rate. And they have a readymade database of talent that they can turn to if they need help with web development, mobile apps and other smaller tasks.

Work on StuGig began in earnest just over a year ago shortly after Ben met Dal Engineering master’s grad Vijay Kumar, who took on the role of chief technology officer and began building out the platform.

Originally from India, Kumar himself had arrived in Nova Scotia eager to work but found it tough at first to find gigs. He took on an instructor role in the Department of Engineering Mathematics and Internetworking after graduation, and helped launch StuGig to assist others like himself in finding career opportunities.

The team applied to the Faculty of Management’s annual Dal $100K competition last spring, winning one of 10 coveted spots in the Norman Newman Centre for Entrepreneurship’s eight-week LaunchPad Accelerator program that comes with $10,000 in funding.

Following that, a five-week innovation internship worth $7,500 brought them back to ShiftKey Labs, which Ben says provided “crucial” support further building out the feasibility of its platform.

A Beta version of the StuGig website launched earlier this spring for students with digital talent looking to showcase their skills to a growing marketplace. More than 100 students have created profiles on the site so far, and the StuGig team is working with local businesses and hiring managers to build out a bigger list of available gigs.

As the team gathers more data in the coming months, it will work to refine certain features to better suit the needs and wants of users. Currently, students bid on projects to win work, but eventually the platform will also include a feature where tasks can be scooped up on demand. The team also plans to add a new feature later this year to improve the process of how companies and regular users pay students for projects.

Ben says he’d like to eventually expand StuGig beyond the tech field into other areas, too. At the broader level, he sees the platform as a driving force in modernizing the way education is delivered through experiential learning in Nova Scotia. He says the raw skills are here in the province, and StuGig’s mission is to help entrepreneurs, companies and even the public sector tap into those.

“There are some very talented people in the province,” he says. “Why are we not boasting about that?”

All comments require a name and email address. You may also choose to log-in using your preferred social network or register with Disqus, the software we use for our commenting system. Join the conversation, but keep it clean, stay on the topic and be brief. Read comments policy.