Rendering Styles: Different Techniques and How to Achieve Them

Renders are representations that can convey the three-dimensional aspect of a design through two-dimensional media, i.e., an image, providing a preview of how the project will look in the future. However, unlike what people often imagine, rendering is not always a realistic visualization of architecture.

Since it is a tool for visual communication, renderings can have different styles depending not only on the project itself but also on the specific targeted audience and, above all, on the identity of the architect or architectural firm responsible for the design. 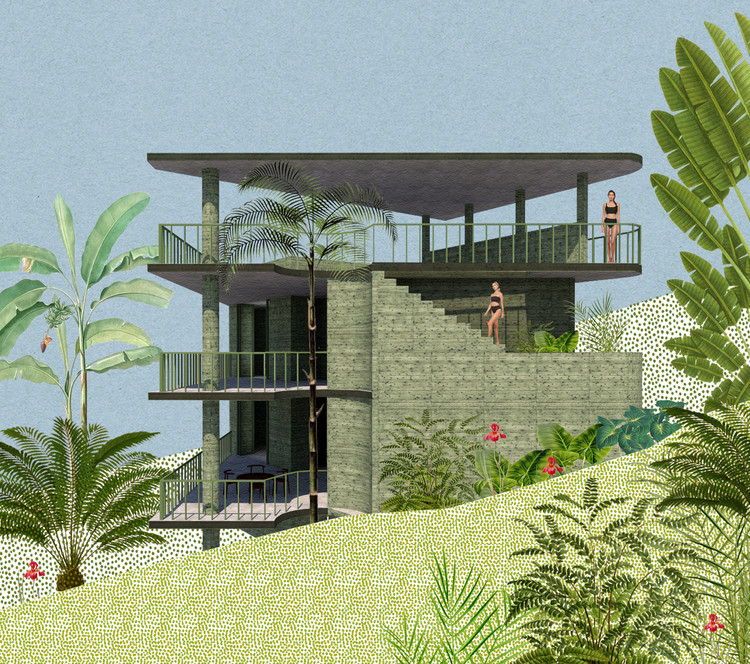 Given the vast diversity of visual representation that architectural renderings can provide, we have listed a few examples of different styles and the software used to create them.

Collage is a method of representation that has been used in architecture for some time. This is originally an analog technique but was recently adapted to digital software. Textures, objects, and human figures are added through image editing programs, such as Photoshop, by manipulating scenes taken from 3D modeling software.

The final composition usually contains textures but no shadows or realistic reflections and perspective, just like an analog collage. These “not so real” representations allow for more diverse narratives for the viewers.

Sketches, either hand-made or digital, are a direct form of communication consisting of rough drawings to express an idea very briefly. For this reason, it is used not only before project execution but also during construction to clarify any eventual questions at the site.

Besides the reliable paper, pencil, and pen used in freehand drawings, software and apps for mobile and tablets have become popular in recent years. Some examples are Morpholio Trace, Autodesk Sketchbook, and Paper.

The constant improvements in rendering software have made it possible to create images that are increasingly similar to photographs of the actual built environment after the project has been executed. This hyper-realism, which usually appeals to both clients and architects, is achieved by setting a series of parameters, such as lighting, texture, opacity, and reflectivity of the objects.

Today, there are many programs aimed at hyper-realistic renderings, such as V-Ray, Lumion, Corona, Enscape, Twinmotion, 3ds MAX, and Cinema 4D.

Aside from architectural schemes and diagrams, illustration can also be applied to renderings of environments. With no intention of accomplishing a realistic impression, these renderings usually stand out precisely because of their imaginative quality, suggesting non-obvious alternatives for the built environment.

In 3D modeling, materials are set up to match the materials used in physical models, such as different types of paper and wood. To achieve this result, you can use the same software that is used for more realistic renderings but applying different settings for textures.

By combining two or more rendering styles, you can achieve many different results in your final image. There are several ways to mix rendering styles, for example, to create a distinction between architecture and exterior elements such as terrain and vegetation, by blending different techniques using overlay and transparency.

In addition to the specific software for the production of each of the rendered images, this requires the use of an image manipulation program, such as Photoshop.

This article is part of the ArchDaily Topic: Rendering, proudly presented by Enscape, the most intuitive real-time rendering and virtual reality plugin for Revit, SketchUp, Rhino, Archicad, and Vectorworks. Enscape plugs directly into your modeling software, giving you an integrated visualization and design workflow.’ Learn more about our monthly topics. As always, at ArchDaily we welcome the contributions of our readers; if you want to submit an article or project, contact us.