TEMECULA, Calif., Dec. 3, 2021 (SEND2PRESS NEWSWIRE) — Publishers Newswire, a news publisher covering books, music and software launched in 2004, has announced its annual “books to bookmark” list of 11 new and interesting reads from small publishers and self-published authors across the U.S. These books are often overlooked due to not coming from major traditional book publishing houses. 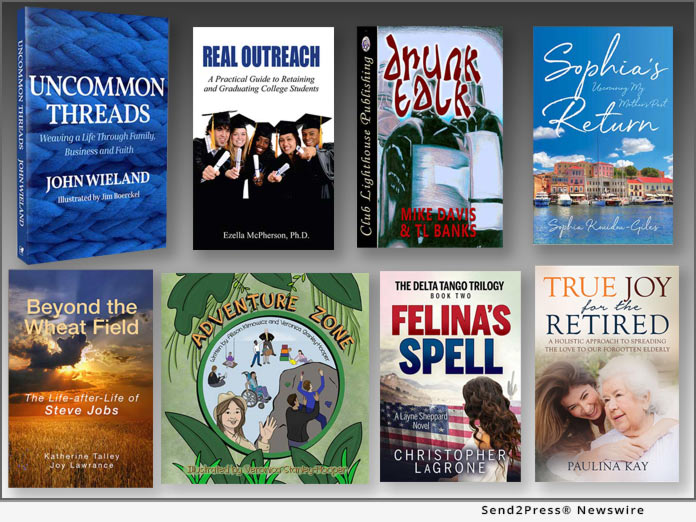 “This past 18 months have been a whirlwind of new books being published by small publishing houses, and authors embracing self-publishing,” says PNW editor and publisher, Christopher Laird Simmons, who has worked in the publishing world since the late ‘70s, and is also CEO of the website’s parent company, NEOTROPE®. “It seems the unfortunate pandemic has given many folks the time and impetus to ‘finish that novel,’ or write a telling memoir, then release it to the world. This year’s list is truly diverse.”

Herewith are 11 interesting reads worth a look (alphabetical order, based on book title):

* “Adventure Zone” by Allison Klimowicz and Veronica Stanley-Hooper (ISBN: 979-8524737199; Independently Published) is written for parents and children from the ages of 6 to 12 years old, explaining pediatric therapies in a fun, informative way. This colorfully illustrated book is designed in parts and can be read as a story alone or as a story and a resource with definitions that explain terms that parents and children may experience when entering a pediatric therapy office.

* “Drunk Talk” by Mike Davis and TL Banks (ISBN: 979-8675709625; Club Lighthouse Publishing) is “an emotional roller coaster ride with a twist of humor.” Included are 48 short discussions about different aspects of life with a twist of humor, your drunken fortune, and unique quotes to keep you focused. Those who think they have heard it all, better think again.

* “Beyond the Wheat Field – The Life-After-Life of Steve Jobs” by Katherine Talley and Joy Lawrance (ISBN: 978-1982268169; Inspire Publications LLC) is an offbeat yet deeply spiritual and beautifully illustrated book, a “compilation of afterlife communications with a tech icon recounting spiritual dialogues that Talley has had with Jobs since his passing.” The book offers a different perspective, regardless of one’s spiritual beliefs, on the life of Apple co-founder Jobs.

* “Felina’s Spell – The Delta Tango Trilogy Book Two” by Christopher LaGrone (ISBN: 978-1631955457; Morgan James Publishing) tells the tale of how fictional Border Patrol Agent-to-be Layne Sheppard has met the girl of his dreams, but will he meet his demise in the field training gauntlet that awaits? Author LaGrone draws on his own experiences as a recruit, field trainee and border agent to create a border saga unlike any previously published immigration-themed novel.

* “How to Dress a Naked Portfolio: A Tailored Introduction to Investing for Women” by Beverly Bowers (ISBN: 978-0578312705; Sister Courage Publishing) is a guidebook to “help women learn more about how to take charge of their investments.” The book asks the reader to answer eight questions and then based on those answers, the reader moves through a step-by-step process that designs a customized investment portfolio just for her. To make it a little more engaging and fun, Bowers has compared planning an investment portfolio to putting together an outfit.

* “In for Life” by Elaine Alice Murphy (ISBN: 978-0578965659; Satuit Press) is a memoir about Murphy’s two-decade exploration of the wrongful murder conviction of her son’s classmate and friend, Sean K. Ellis. The high-profile Boston case gained international attention when it became the subject of the eight-part Netflix docuseries “Trial 4.” Murphy, working with Ellis’s family and attorneys to gain him a retrial, discovered previously undisclosed evidence of police corruption that the courts called a “game changer” and led to his release after he’d spent nearly 22 years behind bars.

* “Real Outreach: A Practical Guide to Retaining and Graduating College Students” by Dr. Ezella McPherson (ISBN: 978-1737273103; Dr. McPherson Coaching) outlines successes with at-risk college students. She has retained 82% to 100% of at-risk first-year college students during her tenure at the University of Illinois at Urbana-Champaign, Wayne State University, and Indiana University. The book will be of interest to high school and college bound students – and their families – so that they can learn about some challenges to endure while pursuing a college degree.

* “Sophia’s Return: Uncovering My Mother’s Past” by Sophia Kouidou-Giles (ISBN: 978-1647421717; She Writes Press), follows a daughter’s journey to “understand why her mother left their family home when the author was a seven-year-old child, without a good-bye or explanation.” Determined to unlock the true story, Kouidou-Giles travels back to Greece and interviews family members; all of whom are sympathetic but reluctant to disclose information. Finally, she hires an attorney to search for documents-and uncovers a story she never knew existed.

* “Tales From the Liminal” by S. K. Kruse (ISBN 978-1944521158, Deuxmers Publishing) features a brood of 15 short stories. Kruse, a former writer for The Onion, and mother of 11 children, offers fantastical tales including: following Schrödinger’s cat into the zeroth dimension, grooving to Barry Manilow with Bigfoot on a beach, traveling with a troubadour of the apocalypse to Belleville, or having drinks with a woman who has seen Gertrude Stein in the condensation on her window.

* “True Joy for the Retired, A Holistic Approach to Spreading the Love to Our Forgotten Elderly” by Paulina Kay (ISBN: 978-1773710075; Black Card Books) shows the young and old how to overcome “the deeply rooted Disconnection between generations; the often heartbreaking loneliness and hopelessness of the elderly; and the fear about getting older.” While taking time off for her family, Kay went through very difficult times that propelled her to an internal growth transformation that led her to reclaim her love for the elderly.

* “Uncommon Threads: Weaving a Life Through Family, Business and Faith” by John Wieland (ISBN: 978-1951407711; Legacy Launch Pad Publishing) is a memoir connecting family, business and faith, that is “is equal parts self-deprecating and informative.” Wieland is the CEO of MH Equipment, a material handling company. In the 27 years that Weiland has served as CEO, MH has grown from a small, virtually bankrupt company with three branches and 50 employees to a thriving one with over 900 employees and over 30 branches.

Publishers Newswire is an online publication founded in 2004, part of the Neotrope News Network, covering books and publishing, music and software news. Publishers Newswire does not endorse, “recommend,” or review any of the book titles mentioned, and the specific books mentioned are for informational purpose only. No fee or other consideration was paid for inclusion in this list.

Neotrope has been in the publishing business since the late 1970s, when then teenage founder Christopher Simmons published first “The Comic Collectors Comic Checklist” sold at the San Diego Comic-Con. The company went on to publish “The Galaxy of Fandom” a one-off entertainment magazine, and later “The Adama Journal” a fanzine for “Battlestar Galactica.” In 1982, “The Unicorn Hunters Guidebook” was featured in Playboy magazine. In 1987, a fanzine for “Star Trek: The Next Generation” called “Galaxy Class” launched. In 2008, the company published “FRACTOPIA” a coffee table art book by Simmons (ISBN: 978-0971055506; Neotrope Press).

The company publishing unit was originally called Silver Unicorn Graphics (S.U. Graphics and Marketing), became Mindset Press in 1987 and Neotrope Press in 1997. The Neotrope News Network was launched in 2004.

The company is also a leader in online advertising and marketing, public relations, music/video and multimedia. Neotrope is based in the Southern California wine country of Temecula. Neotrope® is a registered trademark in the U.S. and Europe.

Christopher Simmons has been a working journalist since 1984 when he sold his first article to POLYPHONY magazine. Later writing for diverse pubs including Computer Player, Digital Imaging, Micro Publishing News, Spazz, the Graphic Artist’s Guild newspaper, among many others. He has been widely interviewed on topics related to technology, marketing, health and entertainment.

Learn more about Neotrope at: https://neotrope.com/ (website under reconstruction for 2022).