It was perhaps no coincidence that the number one pitch was a dating app. After all, the 80 young Central and South American Jews had come to spend five  months getting to know Israel’s tech ecosystem, with a view to making the relationship permanent.

The Discover by Israel Innovation Experience program provided these participants from diverse backgrounds — psychology to law, history to economics, from Mexico to Argentina — with the skills to understand the cornerstones of entrepreneurship and startups, as well as the opportunity to rub shoulders with players in the local industry, in a bid to give them the necessary tools to set up their own successful startups.

The program, which received partial funding from Masa, an organization that creates experiences for young Diaspora Jews, consisted of an internship with a tech firm, a startup leadership course, guest lectures with industry heads who spoke about various aspects of startups — like the legal and fundraising sides — and group meetings with leaders in Israel’s innovation ecosystem.

The first run of the program ended in a demo day on July 15 at which participants pitched their startup ideas to a panel of judges simulating investors.

Participants didn’t need to have an actual startup to pitch, since the aim was to provide them with insight into how the pitching process works in the industry, said Assaf Ben-David, a lecturer at the private college IDC Herzliya. A handful of winning pitchers were awarded a prize of a few hundred dollars from Wix, an Israeli web development company, as well as a web domain package for one year.

The first-place idea was a dating app aimed at finding long-term relationships, which uses AI to learn about the user and find sustainable relationships. Second place was an online service that helps a user plan multiple destinations traveling, including connecting flights, timing and where to stay.

Other ideas included a gym bike that generates electricity, as well as an app that creates artificial rain in certain geographical areas.

In addition, participants got a taste of Israeli culture by traveling the country, bathing in the Dead Sea, and visiting Ein Gedi, Jerusalem and Eilat. They also experienced Sabbath dinners, which included lectures by rabbis who spoke about Jewish life and tradition. 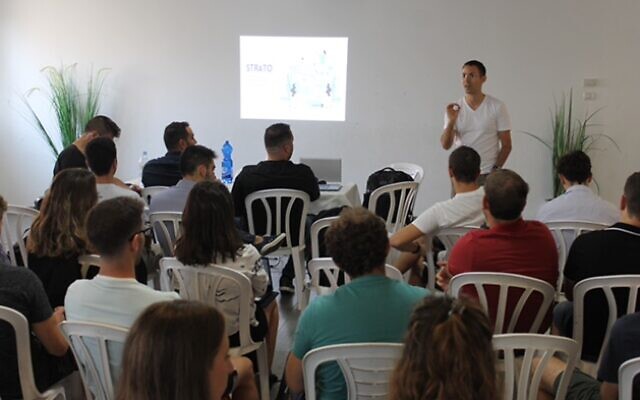 Ben-David is in charge of the program’s academic side. A mix of cultures, experiences and different points of view are all prolific ground for creating startups, he said.

He emphasized the value in teaching practical experiences rather than focusing on the theoretical aspects of entrepreneurship. The lectures dealt with all aspects of startups — raising money, managing failures, practical legal aspects, business and tech side.

Now the participants will need to assess whether they want to continue to pursue entrepreneurship, Ben-David said. He forecast that around 70 percent of the group will eventually immigrate to Israel.

If they do, he said, they will be able to leverage what they got from their Israel experience.

During the five months, he said, the participants joined forces and created “new things, new ventures, new systems” in a bid to “change the world,” he said. “If they decide to go [home] then, again, they spread the Israel experience, they share the culture, they share the mentality.”

“Startups are all about innovation and creation, and building something new,” he added.

Daniel Hippertt, a 29-year-old participant from Rio de Janeiro, Brazil, said that Brazil’s dire situation during the coronavirus pandemic, in which over half a million people died, second in the world only to the United States, pushed him to join the Discover program.

The program presented him with the opportunity to get away from Brazil, come live in Israel with its world-beating vaccination campaign and at the same time boost his knowledge about the local tech industry and hone his entrepreneurial skills.

“I think that I got the best of the two worlds. I could get away from a reality that was really crushing me,” said Hippertt, who has a background in marketing and sales. “And also grab a major personal and professional opportunity for me.”

Hippertt said he strongly valued the socialization aspect of Discover, a nice change from endless Zoom meetings. He also appreciated the chance to hear from industry leaders and learn more about the Israeli innovation ecosystem.

He said he loved spending time with the other participants in the program, meeting new people and getting the chance to reinvent himself through the program.

“It’s really good to have a new perspective on life and to see that it’s possible to start over again,” Hippertt said. “I’m really keen on the idea of staying in Israel.”