No less than four times per year, every year, I  hear, “If I am ranking well organically, I shouldn’t need to pay for those keywords.”

Or, more often, it is: “I am top of the page for my brand name, so I don’t need to bid on my brand keywords.”

And each time I hear this, I let the small fit of internal rage pass before responding.

That response typically goes something like this: “Well Mr./Mrs./Ms. X, let me tell you about the paid search incrementality theory, or as it is often coined, the 1+1=3 theory.”

After I finish explaining the rule to them, 90% back off from their request to stop keywords, 9% request to test the theory, and 1% ask me to stop talking.

I recently accidentally tested out this theory and will share my findings in this article.

What Is Paid Search Incrementality?

The concept itself has been around since at least 2009. Melissa Mackey wrote an article in the (now defunct) DMNews in March 2009 called Guide to Search Marketing, showing the benefits of SEO on SEM.

The fun name “1+1=3” was coined later on, but the theory has been published and documented many times over.

And not just by the search engines but also by industry experts, and universities.

(If you have the time, here’s a fascinating read of the scientific study done in 2010 by Sha Yang and Anindya Ghose for NYU: Analyzing the Relationship Between Organic and Sponsored Search Advertising: Positive, Negative, or Zero Interdependence.)

The theory itself is that when you do just SEO or SEM by themselves, they will provide one visitor to your site, each.

But when done concurrently, SEO and SEM produce a halo effect. Instead of getting two visitors to the site, you end up with three.

Net-net, together they drive incremental growth.

Based on this theory, if you do SEO work for a site, SEM should also be part of the marketing mix.

In January, a client of ours found themselves in a frustrating predicament. For some odd reason, their billing method was shut off for Google Ads.

This, in turn, led to their campaigns being shut off.

To make matters worse, the resolution was some time out from being available which left their Google Ads account offline and dead in the water.

Until that point, Google Ads and Google organic made up 23% and 23% of their site visits, respectively, accounting for 46% of site traffic combined.

The vast majority of traffic and sales for both paid and organic is on brand keywords.

Therefore, one would assume that when paid went offline, organic would rise to the 47% level of site contribution of visits, or at least 40% of total site traffic.

But that was not the case.

Organic only grew to 36% of total site traffic.

The growth (or lack thereof) of visits on organic suggests a few things:

See high-level data of how we came to these findings:

(Note: Data for all three periods is the same number of days, same days of the week, no change to sales or promotions.) 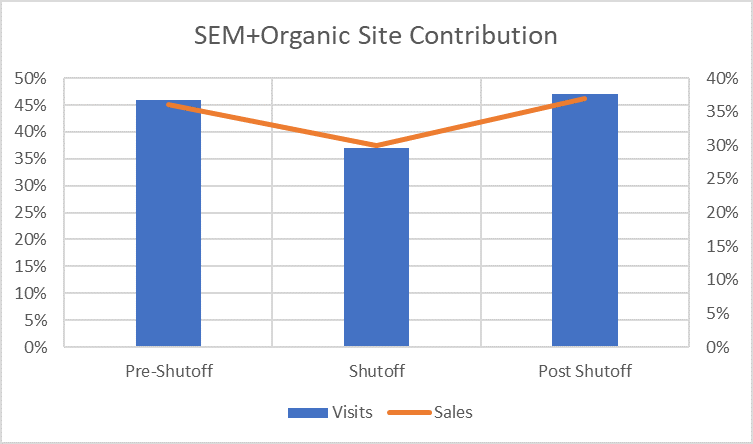 The primary observation is that the total contribution of visits and/or sales, when SEM is offline, is not something that organic alone is able to offset.

To give a little better understanding of how the data came out, here are the changes: 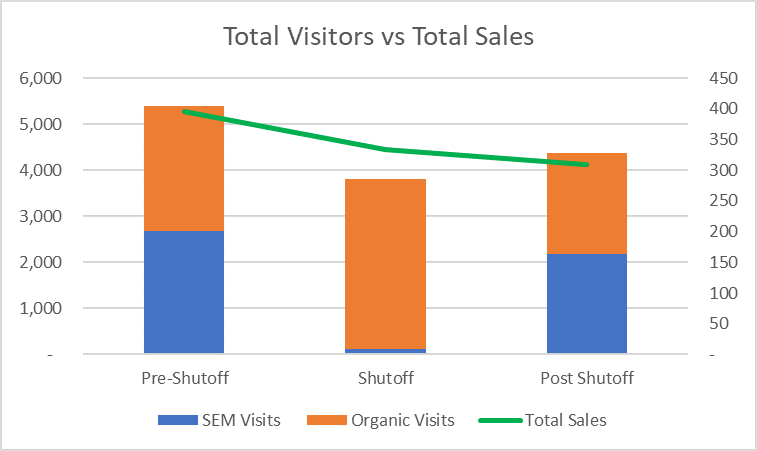 The amount of organic traffic jumped as soon as SEM was out of market.

But with no other elements having been changed, it was clear that organic could not handle the full load of the Google search traffic.

You know what else fell? Sales.

When SEM went back into the market, organic traffic declined to a level similar to the pre-shutoff level

SEM, meanwhile, returned to a level of contribution to total site traffic that was previously seen, as well, accounting for the total site decline in visits of 19% handicap.

When SEM is in the market with SEO, the incremental growth in traffic is 30%-40% range (the majority of which is coming from brand keywords).

This allowed for an incremental 22 sales (on average) when both were in market, or $2,310 in revenue (assumes a $105 average order value).

The media cost for that incremental traffic breaks down to ~$800, giving an ROI on the incremental sales of 277%.

We are speculating that when both SEM and organic are visible on the same query, there is a reinforcement of trust to the searcher.

This leads to the brand more likely getting the click, versus when only organic is present.

Let me lay it out the highlights and key takeaways here:

Organic traffic, providing you rank well, will get you somewhere. Whether it is enough is up to you.

We found that, if you want to answer the age-old question of “how do I get more?” and if you have maxed out your opportunity on organic, investing in SEM is a smart move.

This will drive incremental traffic, above and beyond your original organic volume.

The thought of stopping your SEM traffic may induce stress, but testing this process out (in a controlled setting, and on purpose) may help reinforce the value of your SEM efforts.

Give it a try on a segment of your campaign, and the findings may end up justifying higher investment levels.

All screenshots taken by author, March 2021