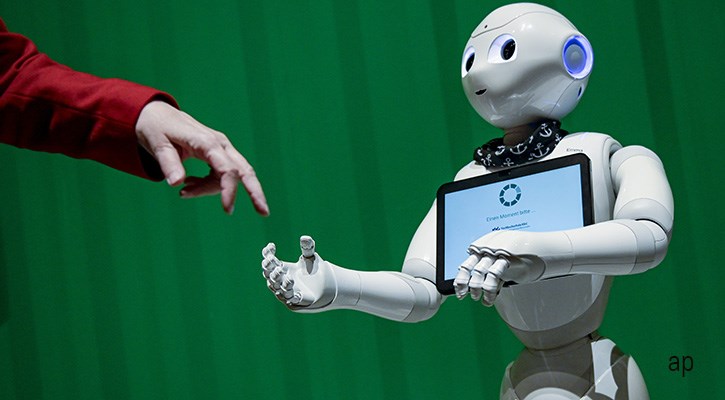 Talk of artificial intelligence conjures images of Robocop and the Terminator for many people; of robots taking the jobs of humans or, worse, attacking them. But artificial intelligence is engrained in our lives, whether it’s the algorithms showing us relevant adverts in a social media feeds or computers scanning vast databases of information to find a medical diagnosis. And these fund managers think we’re only just at the beginning of this trend.

Johan Van der Biest, manager of the Candriam Robotics fund, says: “Forget about the robots you knew in a factory 10 or 15 years ago, that were difficult to program and had to be caged. We are tapping into megatrends that won’t be affected by economics or macro events, and that can’t be derailed by politics or Covid.”

The most obvious application of artificial intelligence is in data and computer processing. The world’s top supercomputer, Fugaku, built by Fujitsu (6702) and Riken in Japan, can now calculate in a single second what a human brain would take 18 billion years to do.
On a smaller scale, recent breakthroughs have seen Google’s (GOOGL) translate app given the ability to transcripe text in real-time through a device’s camera. Microsoft’s (MSFT) Hololens is a wearable virtual reality headset which can be used in product design, training and education to name just a few areas. While in medicine, machine learning is enabling oncologists to make more accurate cancer diagnoses.

Chris Ford, manager of the Sanlam Artificial Intelligence fund, says: “Artificial intelligence transforms businesses and is going to define the ability for a company to succeed.”
As well as a technological innovation, a key driver of the robotics and AI trend is the world’s ageing population. Not only does this mean a decrease in the working population, it means a greater need to care. In Japan, for example, it is estimated there will be a shortfall of 400,000 nurses by 2025. Robo-nurses are being developed to assist with care of the elderly and Robear, developed by Riken and Sumitomo, helps life patients from their bed into a wheelchair or to help those who need assistance standing up. Van der Biest says: “Covid-19 has also increased the experimentation of robots with logistical tasks such as cleaning or bringing food and medicine to patients.”

AI also has a role to play in slowing climate change. Electric vehicles, it is widely acknowledged, will help to reduce emissions but autonomous vehicles have a role in agriculture too. Precision farming, using sensors, can help farmers increase yields and reduce wastage while ensuring crops are planted and harvested at the right time and depth. Vinbot is an agricultural robot developed by Robotnik being used in vineyards; it combines autonomous driving and advanced senses to capture and analyse vineyard images to improve yields and reduce the use of fungicides and herbicides. Ford says: “AI is solving and addressing some of the most extraordinary questions facing the world.”

Is AI too Expensive to Invest in?

But finding “pure” robotics companies is not easy, says Van der Biest, and embracing this theme means identifying those firms generating revenues from robotics, even if it is not their sole business such as semiconductor maker Nvidia (NVDA) or Google-owner Alphabet, which is using AI to reduce the energy consumption of its data centres; its AI division, Deepmind, has developed an AI-steered cooling system that is estimated to bring energy savings of around 30%. “We look for companies that are already embracing AI to differentiate themselves and improve their productivity,” says Van der Biest.

Tesla (TSLA) is also poised to benefit from expected growth in EV sales of 24% a year until 2030. Cybersecurity companies, which have become even more important in the era of remote-working, are another way to play the theme. Companies are increasingly realising the importance of AI and the vast range of applications it has – spending on AI is anticipated to grow at 37% a year over the next five years.

Investors might also look to a passive fund which tracks robotics and AI stocks such as the Silver-rated iShares Automation and RoboticsETF or Bronze-rated L&G ROBO Global Robotics and Automation ETF. These offer access to various stocks involved in the sector, but are fairly niche offerings with a limited number of holdings.

The strong run that has been enjoyed by the tech sector in recent years means this is not a theme for value-driven investors. Indeed, the Bronze-rated Sanlam Artificial Intelligence fund was up 52.6% last year and 40.1% in 2019; it has delivered annualised returns of 23.68% over three years.

“This is not a cheap investment strategy,” admits Van der Biest. “But I’m convinced that it deserves the higher valuations it has because the profit margins and growth are consistently higher than the overall market. It is not overhyped or in bubble territory.”

Ford adds: “We want to find those companies doing very interesting things to disrupt the economy. Companies in this space have such strong moats that other businesses that haven’t evolved are falling over themselves to try and build such a moat – or have admitted defeat.”