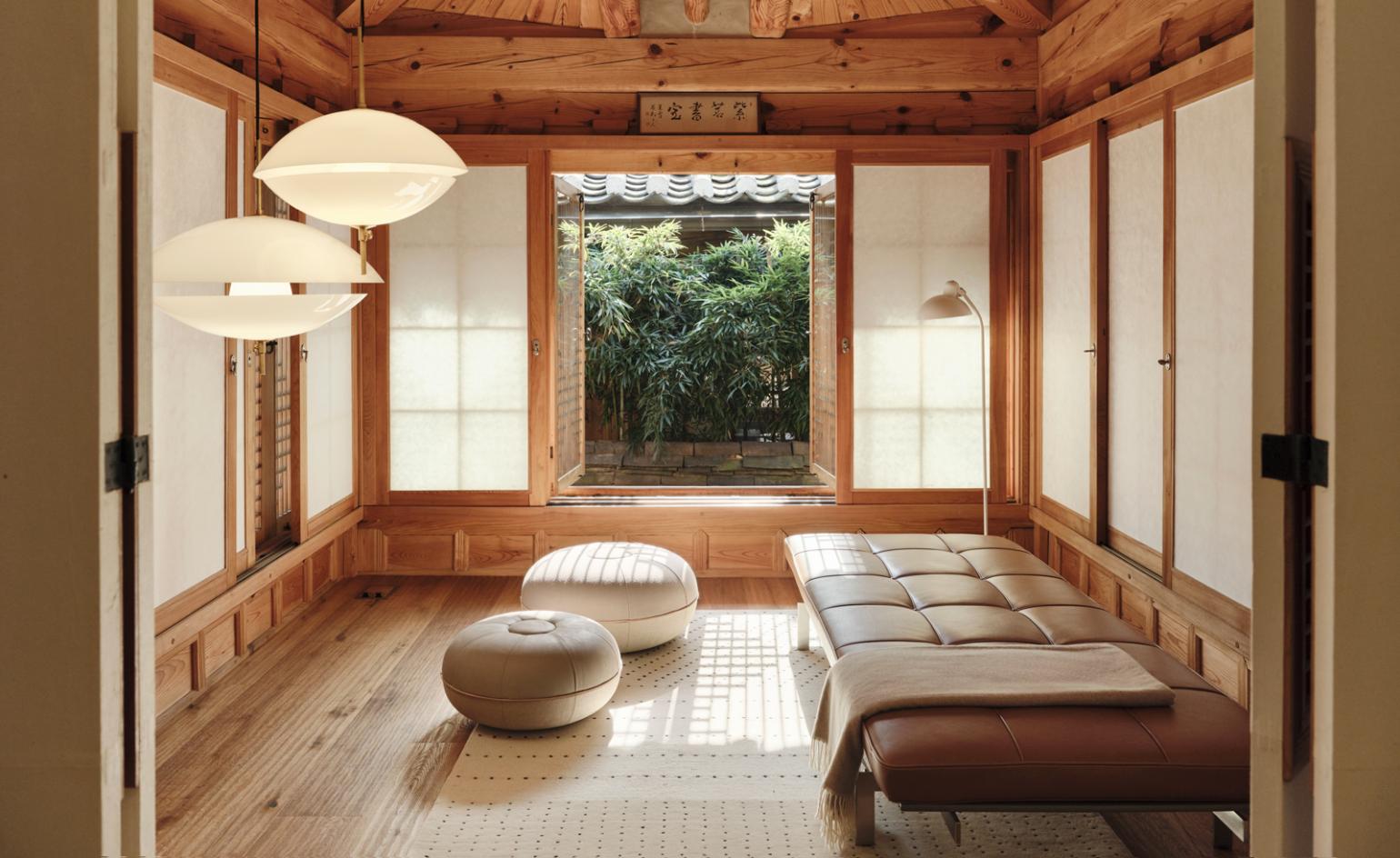 Fritz Hansen Stay, a pop-up hotel in the Gahoe-dong district of central Seoul, converts a Fritz Hansen showroom into a calming retreat. The building, originally designed at the end of the 19th century, is in the traditional hanok style and stays faithful to its roots with a simple layout that encourages natural movement through the space, in its incarnation as a Fritz Hansen hotel.

‘There are the characteristics of a hanok, such as a yard, daecheongmaru (living room), toenmaru (balcony between yard to house), numaru (loft-like floor/raised area), deulmoon (connecting door between master bedroom and living room), wooden tiled roof and shoji paper windows,’ explain the Fritz Hansen team. By keeping to this arrangement, organic spaces encourage a seamless flow between the indoors and outdoors.

Contemporary and modernist design accents make a chic foil for the traditional elements, with furniture adhering to neutral hues for a feeling of tranquillity. ‘Poul Kjærholm furniture in various places in the hanok is arranged to give a perfect view of the beautiful scenery of Seoul, the peaceful Bukchon Hanok Village and Namsan Tower. Kjærholm’s “PK80” daybed, and a glass “Clam” lamp by Ahm & Lund also gently embrace the space,’ the team add. The pieces sit alongside other design classics, such as Arne Jacobsen’s ‘Egg’ and ‘Swan’ chairs, as well as artworks by Korean artist Heejoon Lee. The elegant lines of Kjærholm’s furniture act as a harmonising presence, uniting the opposing elements.

‘Fritz Hansen wanted to show how contemporary design blends with a traditional Korean house,’ say the team. ‘A Danish interior mood is created in the house through the embracing of low light. Lounge chairs such as the “PK20” and “Swan” encourage relaxation and a slower pace. Danish tea is offered as a welcome drink when guests check in, while a contemporary, Danish mood is enhanced with international art books and Bang & Olufsen speakers. The aim was to create a “hygge” mood in a traditional house, through slow experiences such as incense, tea and music. Fritz Hansen wanted guests to feel a little Denmark in a Korean house.’ §