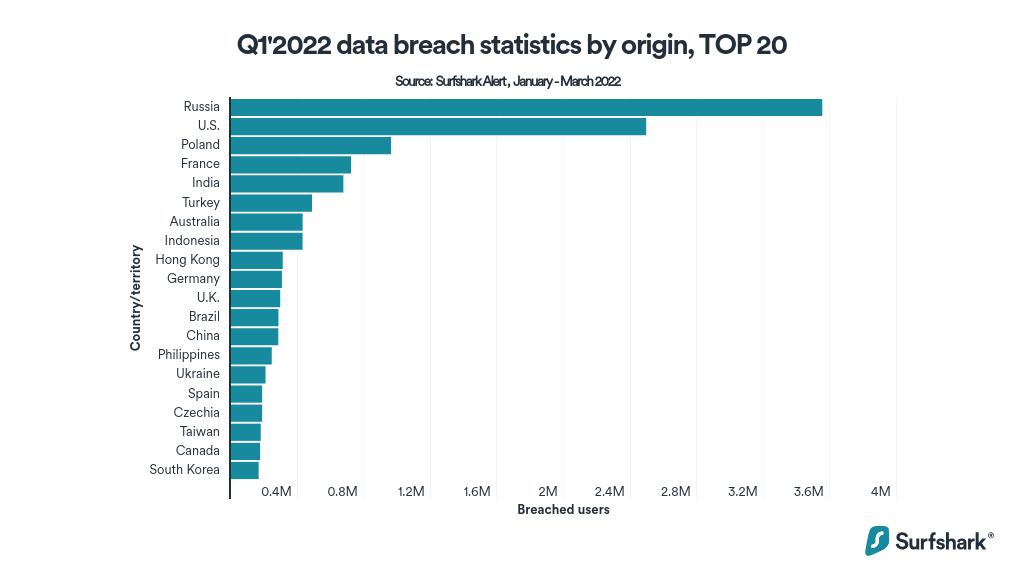 Russia is now the most-attacked country in the world and Russian citizens, who make up less than 2% of the global population, now constitute almost a fifth of all cyberattack victims. In fact, five times more Russian accounts were breached in March than in January as cyberattacks have ramped up significantly in 2022.

The data is from cybersecurity company SurfShark, which provides VPN (virtual private network) and antivirus solutions.

The increase in attacks on Russia in response to its invasion of neighboring Ukraine have caused a sharp disconnect in breach statistics. While the U.S., Canada, and many other countries showed fewer successful attacks and saw cybersecurity attacks dip 58% quarter over quarter, attacks on Russia are sharply up with 136% more email accounts breached.

Cyberattacks on Ukraine are also down, Surfshark says.

“Russians alone make up almost a fifth of all global victims, of which were 3.55 million,” the company said. “Ukraine’s invasion has likely influenced this situation as the hacker group Anonymous declared that it was targeting the country just days after the start of the war. Users in Ukraine appeared in 67% fewer breaches than in the quarter before the invasion. It’s now 15th in the world – previously, from October to December 2021, Ukraine was the most breached country in Eastern Europe.”

Surfshark is tracking breaches of email accounts; other types of cybersecurity issues may follow different trends and have different numbers.

That translates to two internet users’ data being leaked every second so far in 2022.

One other country that’s up: Poland. Poland is significantly supporting Ukraine in its defense against Russia.

The U.S. decline in successful attacks was its second successive quarter of lessened vulnerability.

The data is from Surfshark Alert, a service that notifies email users when their accounts are breached. Email accounts are often a first target for hackers, since with access they can often change passwords and get into other, more sensitive systems.