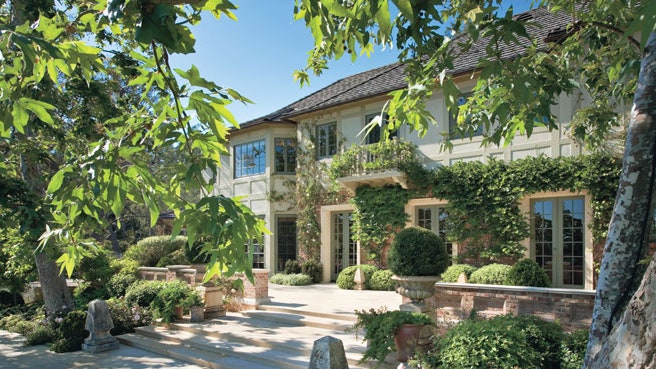 This article originally appeared in the January 2009 issue of Architectural Digest.

The building bug does not discriminate. It can strike anyone at any time and any place. A retired lawyer living in Pasadena, California, was afflicted sometime around 2000, the year that she, her money-manager husband and their three children said so long to Pasadena’s leafy environs and hello to Los Angeles’s bustling Westside. The impetus? A 1932 “cottagey-Tudor-y” house on a scenic knoll in one of the area’s swankier canyons. “All you see are trees and city views and, on clear days, the ocean,” she exults. “I felt like we were in Montecito.”

The allusion is significant. Several years earlier her husband’s business partner had commissioned a Portuguese colonial-style quinta on eight olive-studded acres in that fabled Santa Barbara suburb—a residence the client deemed “the most beautiful house I’d ever seen in my life.” No surprise, then, that she would entrust the renovation of her new home to the quinta’s designer, Michael S. Smith. Smith’s first order of business, in a “whirlwind redo” of the main house that would enable the family to move in within a year, was to lighten up the place, which was overgrown and gloomy even by Tudor standards. He softened the brickwork outside with a mellow clay wash, painted the half-timbers sage green and applied a creamy ivory coating to the exterior stucco. Inside, he brightened the “castle-y” rooms by installing discreet skylights, lightening the heavy beams, and stripping and gray-washing the knotty-pine walls of a somewhat ponderous library-wing addition.

“I wanted to do something with the interiors that was clearly inspired by the architecture,” says Smith, who’s known for his layered, evolved-over-generations aesthetic. “But I always love English houses that are a little more exuberant, a little more interesting, so it’s not all super-severe-looking Georgian decoration.” The rooms he put together have all the warmth and prettiness of traditional English interiors, but their multiple references strike a looser note. There’s no dearth of serious English antiques—George II, meet George III—but they mingle with overstuffed pieces in homey fabrics, chunky Chinese bureaus, exotic Moorish side tables. Coarse sisals foil exquisite antique rugs; bold ikats play off pale English chintzes. The artwork —on walls clad in embroidered fabric or chinoiserie paper or Venetian plaster—ranges from 16th-century impressions to the dog portraits and volcano paintings that the client began collecting seriously in the course of the renovation. She stacks books high on tables and desks, keeps fresh flowers in the rooms and has no complaint with her wheaten terriers making themselves comfortable on the living room furniture.

“We took a traditional house with good bones and made it more unexpected and multilayered,” designer Michael S. Smith says of a Los Angeles residence he renovated. The rear façade. Christine London planned the lush grounds.

Not long after settling into the house, the couple had the opportunity to purchase the quinta from their friends in Montecito, fully furnished down to the flatware. A dream come true—if it hadn’t been for the fact that by this time the client had full-blown construction fever. So it was the work in Los Angeles that carried on—and on. “It was sort of a four-phase project,” she explains. “We did the house and moved in, and then we did the lawn and the poolhouse and pool pavilion and the tennis court.” (“She likes to build stuff,” Smith deadpans.)