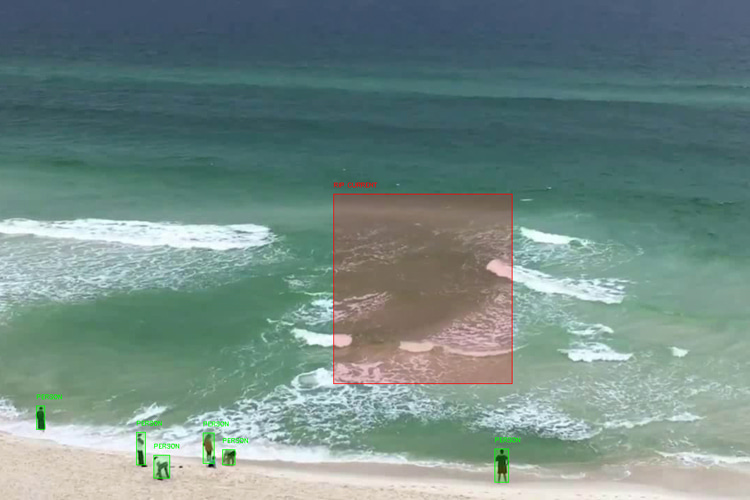 The system uses cameras that help lifeguards keep swimmers away from a hazardous situation near the shoreline.

Every year, rip currents, undertows, and rip tides kill around 100 beachgoers in the United States.

These bodies of water seep away from the shore through deep channels and are very common on nearly any worldwide beach.

They are often indistinguishable in the eyes of a swimmer and even an inexperienced water sports enthusiast.

And most people don’t know what to do to avoid and survive a rip current.

Ricardo Santana is a passionate surfer with a degree in aerospace engineering from Técnico Lisboa (IST) in Portugal.

So, he realized he could help detect dangerous rips in crowded beaches and bring that mortality rate down.

“Last summer, I started surfing regularly, and I became much more aware of the countless amount of times lifeguards have to rescue people that have been pulled away from the shore by rip currents,” Santana tells SurferToday.com.

“Moreover, I understood the lack of awareness that most people have of these coastal hazards.”

“Rip currents are highly unpredictable. They appear and disappear in different shapes and formats, which makes it very hard for the untrained eye to catch them.”

Simultaneously, over the past year, Ricardo Santana has been interested in artificial intelligence (AI), and particularly, self-studying machine learning and computer vision.

“Recently, I have been developing this deep learning project with the aim of providing a solution to detect these coastal hazards on a single camera,” adds the Portuguese engineer.

“I thought that by using cameras facing the sea from the top and powered with AI capable of recognizing rips, I could really make an impact, help to avoid stressful situations, or even save lives.”

But what was the initial approach to identifying potential hazardous rips?

After having done some study, Ricardo Santana decided to tackle this problem with a deep learning model.

In other words, the system was fed and trained with positive and negative samples of rip current images captured by satellite.

As a result, the system learned how to predict the correct features in order to classify and locate rip currents in an image.

Santana is currently pursuing a master’s degree in aerospace engineering at the Delft University of Technology in the Netherlands.

With the new technology, the surfer-engineer hopes to create a product/service that detects humans and emits warning signals.

“Yes, the system has also been trained in the same way to detect humans,” notes Santana.

“The idea is to create an alert for potentially dangerous situations before they occur. However, this is a work in progress, and the system will get even better as I add more valuable data for training purposes.”

“But I must say that the model has demonstrated to be capable of handling such apparently difficult detection tasks successfully.”

Does the system detect all types of potentially dangerous ocean rips?

Ricardo Santana stresses that the system has been trained with a great variety of manually labeled rip currents.

“Nonetheless, I am still performing some tests to evaluate its accuracy under different types of conditions,” concludes the Portuguese engineer.

In the future, the AI-powered rip current detection system could very well be available and installed in coastal communities, but also in swimming pools, wave pools, lakes, rivers, etc.

Meanwhile, there’s work to be done.

Santana will focus on improving the reliability of the ocean current detection technology and adding extra features that may improve water and beach safety levels and reduce deaths by drowning wherever there’s a body of water.