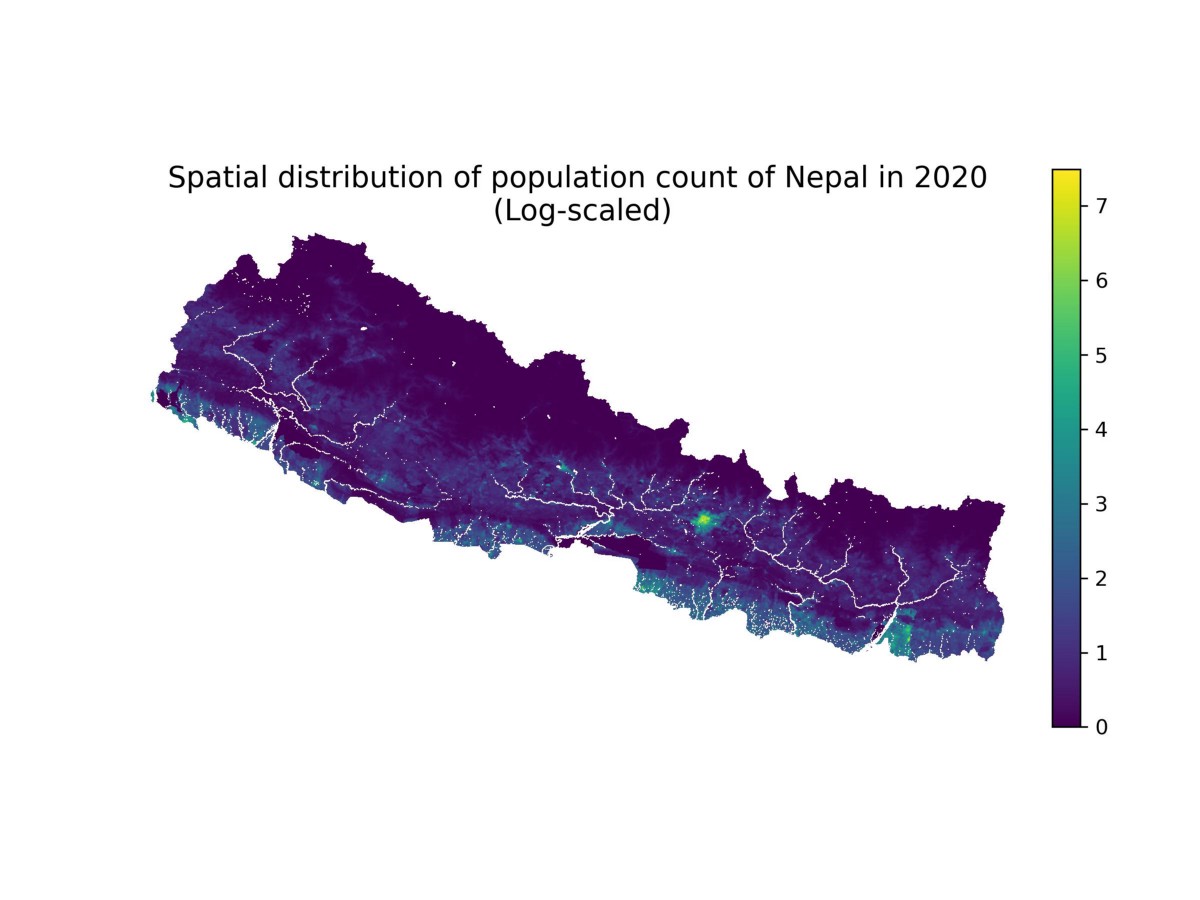 I found the open-access data of the population and population density of Nepal for 2020 on the website of WorldPop. The WorldPop initiative provides the open access archive of spatial demographic datasets for Central and South America, Africa, and Asia to support development, disaster response, and health applications (WorldPop, 2022). First, I downloaded the required files from the URL link directly to my local folder using wget.download(URL, folder). The data was available in the TIF (Tagged Image File) format. TIF is a high-quality graphics format used for storing raster graphics (two-dimensional image as a rectangular matrix or grid of square matrix), which is popular among graphic artists (FileInfo, 2022).

I used the rasterio package to open the TIF files for both population as shown below:

The data in the TIF file is read as numpy array. I created a simple function, which took the natural logarithm of the raster data and then displayed it as an image.

As a result, I get a visually appealing map of population distribution in Nepal using a natural logarithm scale as shown below. With the brightness level of pixels, it is clear that the highest population of Nepal is in the capital city, Kathmandu, which is located in the central region.

Geographically Nepal is divided into three regions: the Himalayas in the North bordering China, Terai (plains) in the South bordering India, and Hills in between. It is clear from the map that the population decreases as the elevation increases from South to North in Nepal. In the map, we can also see three distinct white tree-like structures. These white lines are due to NaN values and represent the three main rivers of Nepal along with their tributaries: Koshi river in the East, Gandaki river in the Center, and Karnali river in the West.

Being a mountainous country comes with its own set of pros and cons. While Nepal is blessed with natural beauty and biodiversity, the mountainous terrain makes several places in the Hilly and Himalayan region inaccessible through road transport. Therefore, having domestic airports is quite important for connectivity, freight and tourism especially in remote places in the context of Nepal.

I got the political and administrative boundaries shapefile of Nepal from Open Data Nepal. I read the shapefile using geopandas. And I plotted the interactive map of Nepal using the explore() feature in the latest version of geopandas as shown below.

From the website of the Civil Aviation Authority of Nepal, I got the list of 34 operational airports in Nepal To plot these airports on the map of Nepal, I needed to get the longitude and latitude of each airport. Geocoding is the process of transforming addresses into geographic coordinates (longitude and latitude). The geopy library in Python is useful for both geocoding and reverse geocoding as shown in the code snippet below. Using geopy, I got the coordinates of 31 operational airports in Nepal.

Plotting operational airports in the map of Nepal

Having nepal as the geopandas dataframe and df containing Airports, Latitude, and Longitude columns, I plotted the airports in the map of Nepal using the following code:

The map above shows the distribution of 31 operational airports across Nepal.

I was curious to know if I want to cover the largest possible area of Nepal by going on a round trip, what would be the flight route I had to opt for in a hypothetical case. To get the answer to this question, I used the ConvexHull method. In geometry, a convex hull or convex envelope is the smallest convex set that contains it. I created an array of points containing latitude and longitude of each airport of Nepal and passed it inside scipy.spatial.ConvexHull() method.

Domestic flights from Kathmandu to other locations

As discussed in the first section of this post, Kathmandu, the capital city of Nepal, has both the highest population and population density in Nepal. The only operational international airport of Nepal (at the time of writing) is located in Kathmandu. A separate unit of the same airport also serves as the domestic airport in Kathmandu. There are 12 possible domestic flights from Kathmandu to other airports in Nepal (Flight Connections, 2022). The following dataframe flights_from_ktm shows the name, longitude, and latitude of 12 airports having flights from Tribhuvan International Airport in Kathmandu.

I used the following code to plot the flight routes from Kathmandu to the other 12 airports in Nepal.

I came to learn recently that flights do not take a straight line as it normally appears on the flat map. Airplanes follow “great circle” routes to account for the curvature of the earth (Wonderopolis, 2017 and Forbes, 2020). To represent these curvatures in the flight routes, I used a simple function called draw_curve() to plot curved paths between two points instead of using a straight line.

Consequently, I get curved lines between the Tribhuvan International Airport in Kathmandu and the other 12 airports, that the former has a connection.

In this post, I described how I represented the spatial distribution of population and population density data in the map of Nepal in the first section. In the subsequent section, I explained the geocoding technique using the geopy library to get the coordinates of the domestic airports in Nepal, and the ConvexHull() method of scipy.spatial. Furthermore, I demonstrated a way to plot the distribution of operational airports on the map of Nepal, and the flight routes between Kathmandu and other places of Nepal using the geopandas package.

The data and notebook for this post are available in this GitHub repository. Thank you for reading!

Wonderopolis, 2017. Why don’t planes fly in a straight line?