What really makes people happy? While countless academic researchers have tried to get to the bottom of this, the truth is, it’s a complicated question to answer.

Happiness levels depend on a number of factors, including one’s financial security, perceptions of social support, feelings of personal freedom, and much more.

This map pulls data from the World Happiness Report to uncover the average happiness scores of 146 countries. It shows average scores from 2019 to 2021, and highlights which countries are the happiest—or unhappiest—and why.

How is Happiness Measured?

Before diving in, let’s briefly touch on how happiness levels are measured in this report. Some clear indicators are health and wealth, which are measured using key metrics like GDP per capita and life expectancy rates.

The report also looks at more intangible aspects by collecting survey responses from each country, to gauge things like:

Similar to last year, the report takes special considerations to track how COVID-19 has impacted aspects of our daily lives, and how it’s affected global happiness levels.

Editor’s note: there are several countries covered in last year’s report that were not included in this year’s dataset, including Haiti, Maldives, and Burundi.

Worldwide happiness comes in at an average score of 5.6, which is a slight improvement since last year’s report. Below, we dive into each region’s happiness levels.

Like last year, Canada ranks first as the happiest country in North America. However, it’s lost some ground on the global ranking, placing 15th this year compared to 14th the year prior. In contrast, the U.S. climbed three places in this year’s report and ranked just under Canada with a score of 6.97 (7.0 after rounding). 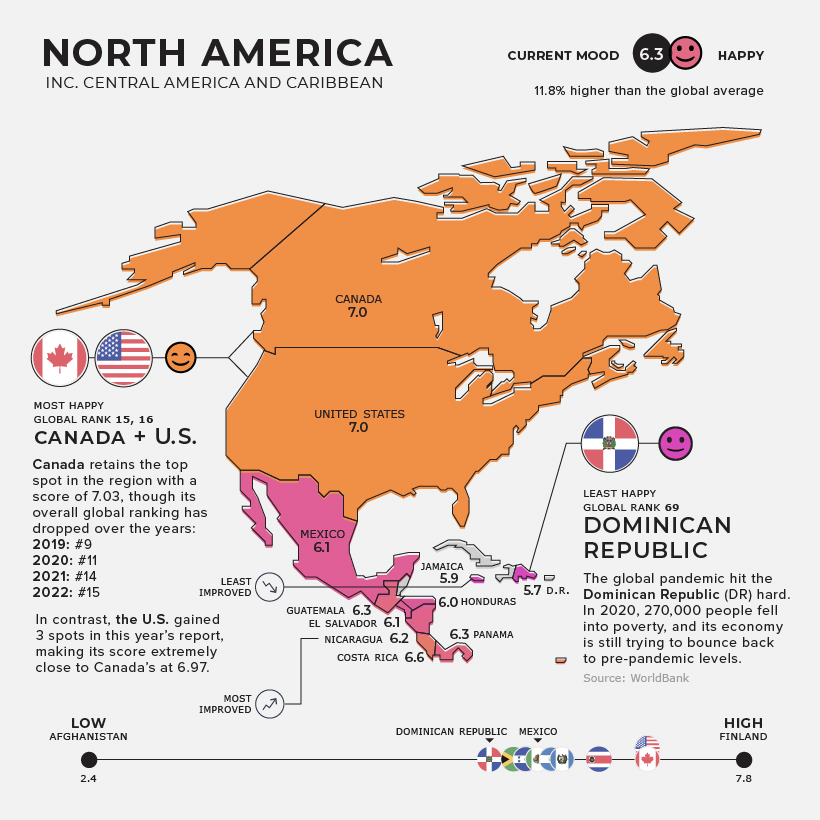 The Dominican Republic comes in last place in the region. While the Dominican Republic has experienced impressive economic growth over the last 25 years, the country was hit hard by the global pandemic—in 2020, approximately 270,000 people fell into poverty, and the economy is still struggling to reach its pre-pandemic levels.

Uruguay retains its top spot as the happiest country in South America. It continues to rank high on the list because of its high income per capita, relatively low levels of poverty, and strong middle class.

While Uruguay was not immune to the impacts of COVID-19, the country was able to transition smoothly to online learning and was the first country in the region to reopen schools. 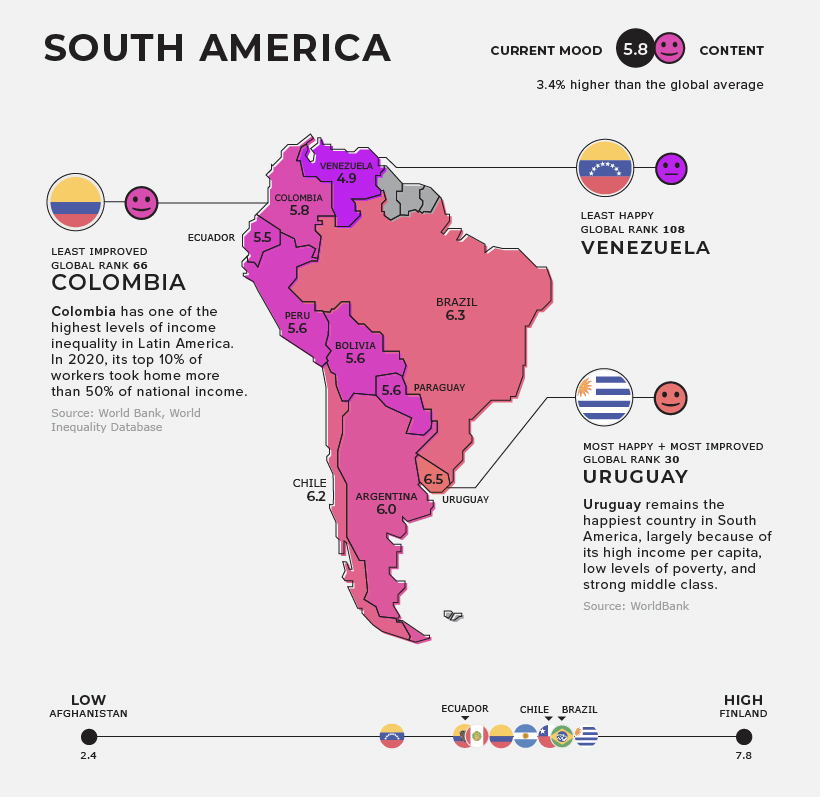 While Colombia has made significant strides towards elevating extreme poverty in the last few decades, it still has one of the highest levels of income inequality in Latin America. In 2020, its top 10% of workers took home more than 50% of national income. 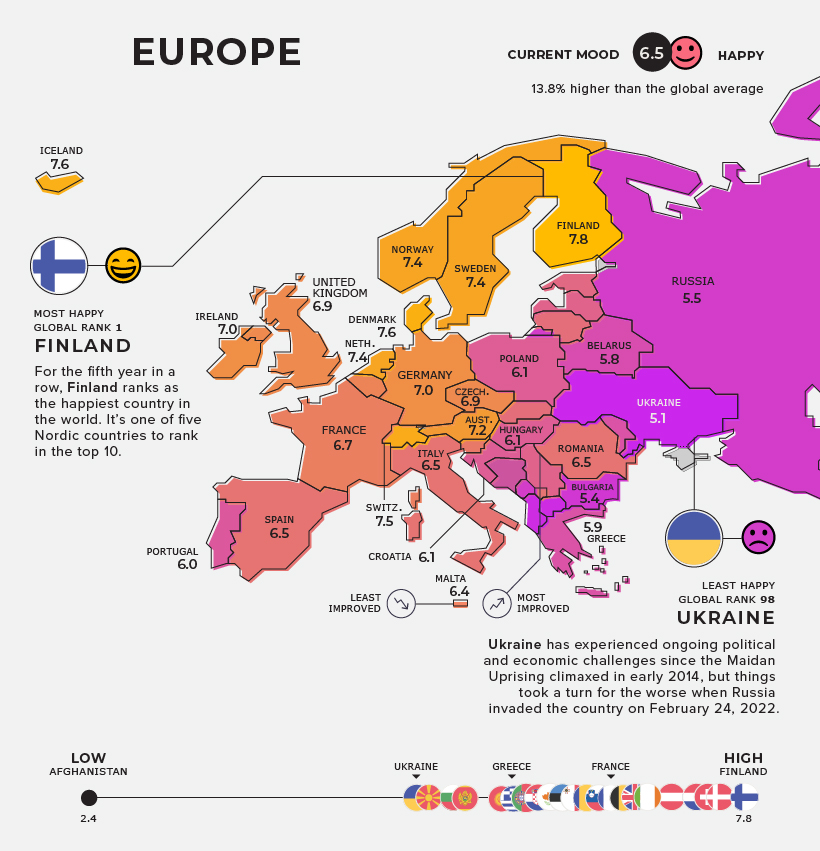 Romania was the most improved country in Europe, climbing 18 spots on the global ranking since last year’s report. Over the last decade, the country has seen some of the most significant economic growth in the European Union and was able to bounce back quickly from its COVID-19- triggered slump.

Ukraine ranks in last place, making it the unhappiest country in Europe. Ukraine has experienced ongoing challenges since the Maidan Uprising peaked in 2014. Events in the country have recently taken a turn for the worse, when Russia launched a full-scale invasion of Ukraine on February 24, 2022. As a result of the conflict, over 3 million people have fled the country.

Turkmenistan is the most improved country in the region, rising 19 places on the global ranking since last year’s report. The country’s boost could be explained by its rapid economic growth in recent years. In 2021, the country’s GDP grew by an estimated 6.3%. 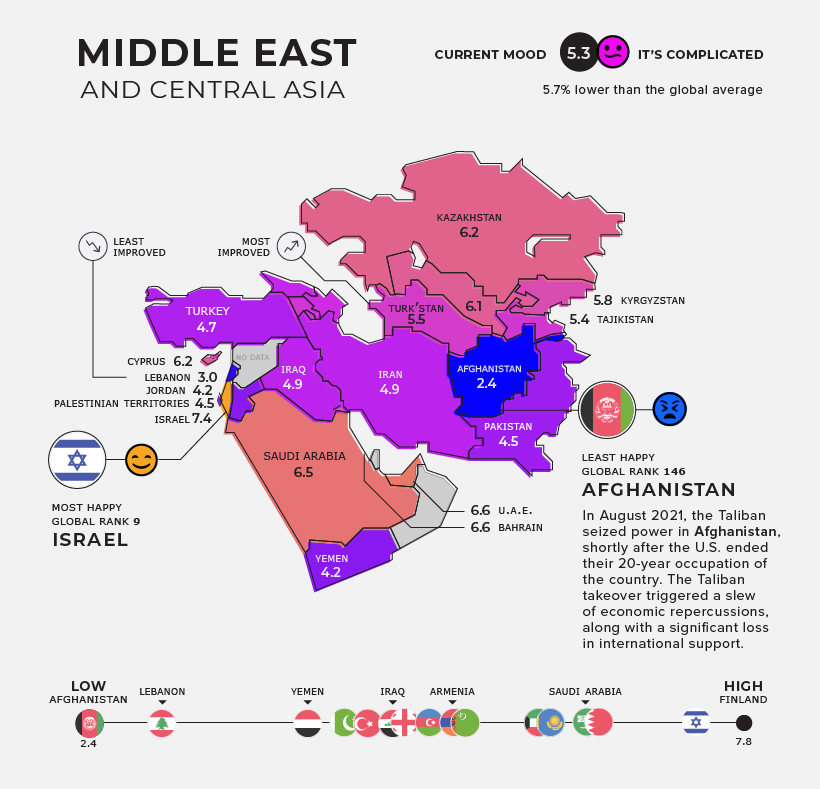 For the last two years, Lebanon has been dealing with a slew of crises. In 2020, COVID-19 spurred an economic crisis that’s been ranked as one of the top 10 most severe economic crises since the mid-nineteenth century. And on August 4th, 2020, a massive ammonium nitrate explosion left the country’s capital city, Beirut, in shambles.

Note: As the report only covers 146 countries, “Oceania” only refers to Australia and New Zealand in this instance.

In this year’s report, China climbed 12 places on the global ranking, making it the most improved country in East Asia and Oceania. The Chinese government recently identified “common prosperity” as a top priority, and has made numerous policy shifts in an effort to combat inequality and eradicate poverty. 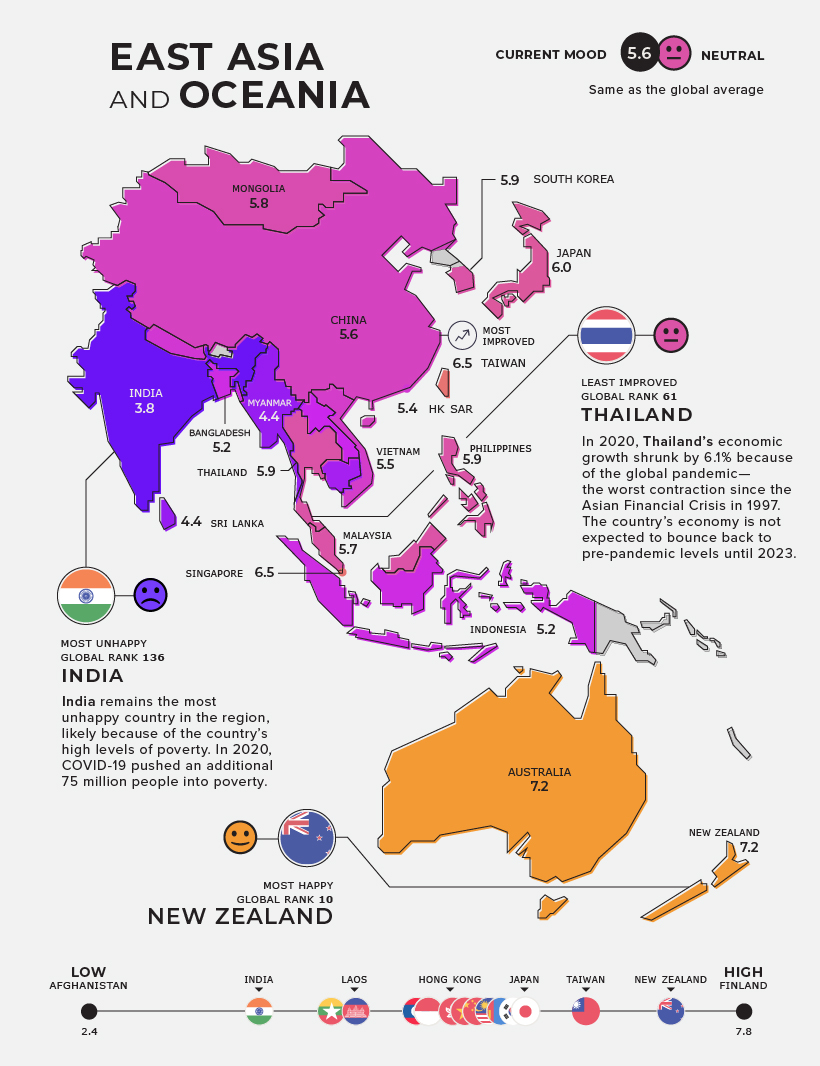 On the flipside, Thailand has improved the least in the region, likely because of the significant toll that COVID-19 had on the country’s economy. In 2020, economic growth shrunk by 6.1% in Thailand—the country’s worst contraction since the Asian Financial Crisis in 1997. Thailand’s economy is not expected to bounce back to pre-pandemic levels until 2023.

With a regional score of 4.5, Africa ranks as the unhappiest region worldwide. Zimbabwe remains the most unhappy country in the region, as it continues to struggle with high levels of poverty. In 2021, approximately 6.1 million people were living below the international poverty line. 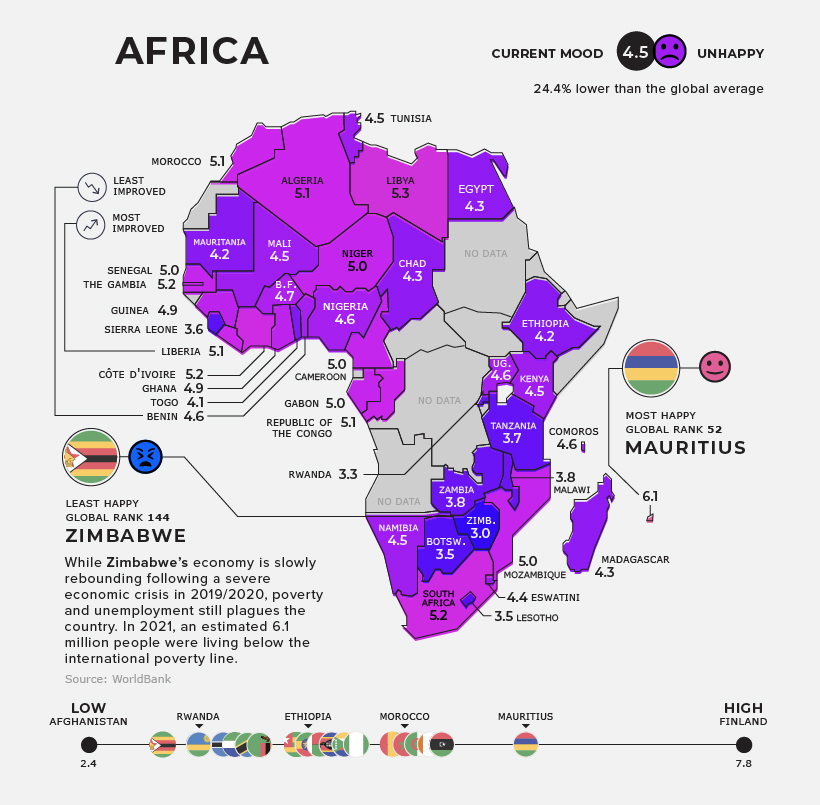 Mauritius remains the happiest country in the region, likely because of its relatively high levels of income. It’s worth noting that Mauritius became a High-Income country in July 2020, but slipped back to its Upper-Middle-Income status in 2021 because of the global pandemic.

We’re into our third year of dealing with the COVID-19 pandemic, and it’s clear that countries worldwide are still reeling from the pandemic’s devastating health, social, and economic impact. It’s unclear when things will fully return to normal—if ever. But on the bright side, countries are slowly showing signs of recovery.