we spoke to designer charles s. anderson whose eponymous studio was established in 1989 and specializes in identity development, packaging, and product design from its studio in minneapolis, USA.

DB: please could you tell us about your background and how you came to be a designer?
CSA: when I was a eight years old my family moved from minneapolis minnesota to a small farm town in the middle of rural iowa. the only art available was 1970s comic books, monster magazines and I loved drawing things myself. I returned to minneapolis to attend the minneapolis college of art and design all of these low-brow comic book influences collided with the college’s swiss modern design approach. MCAD eventually gave me an understanding and appreciation of european modern design, even if it clashed with my love for low-brow pop culture. after graduation in 1981 I was hired by my MCAD instructor (and mentor) peter seitz. seitz had studied at the new bauhaus in ulm, germany under otl aicher, and then at yale with paul rand. he was the first design curator at the walker art center, before establishing his design firm. a few years later I was the first designer recruited to join the duffy design group, an affiliate of america’s top advertising agency, and later became a partner. in 1989 I formed charles s. anderson design. 2014 marks our 25th year in business. 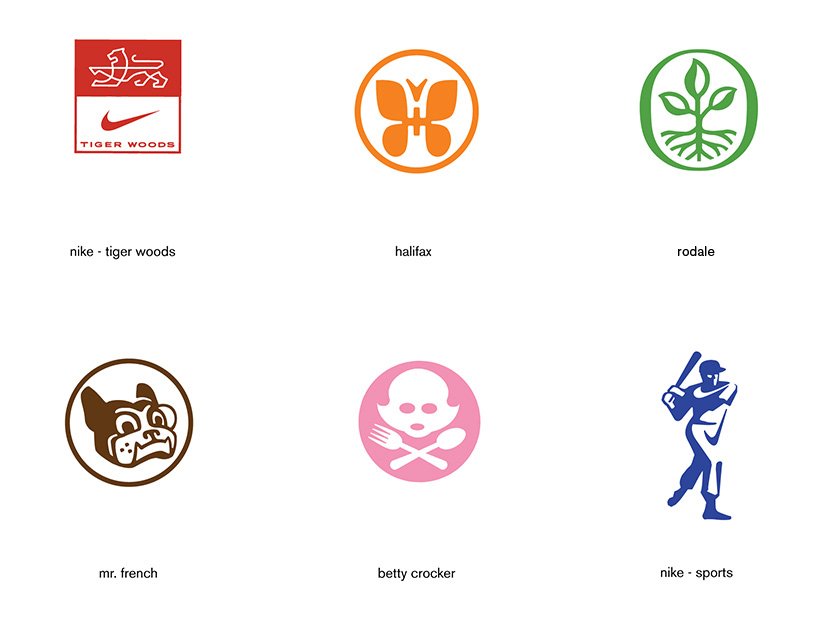 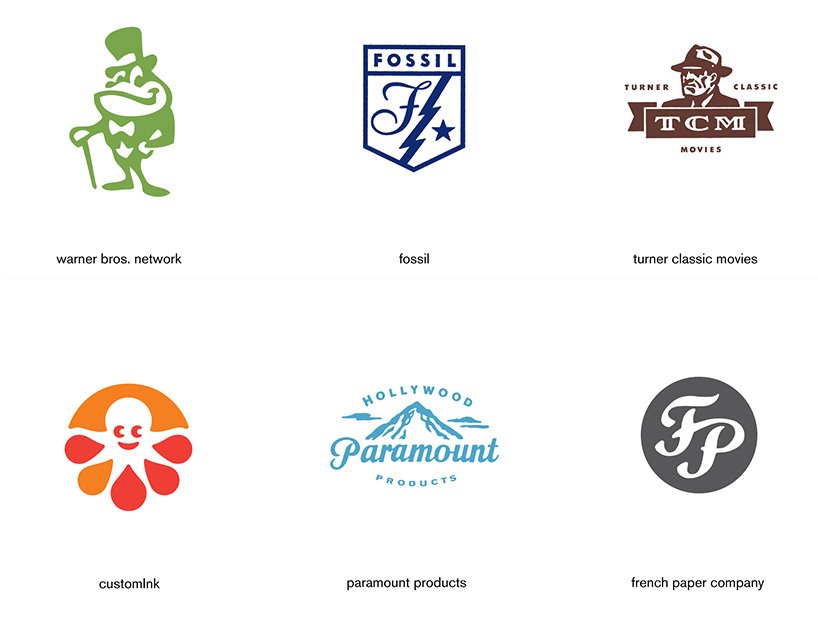 DB: how would you describe your work to someone who hasn’t seen it before?
CSA: our design work is eclectic, graphic, illustrative, and conceptual. we believe that in order to communicate a design must first be noticed. it should stand out and be unique, compelling, interesting, funny, strange… anything except boring and predictable. we view art as the aesthetic, human, cultural part of design that makes it interesting and compelling.’commercial art’ is a better description of our work than graphic design, because we create art for commerce.

DB: what / who has been the biggest singular influence on your work?
CSA: in addition to peter seitz, in 1974 while still in high school, I met a retired commercial artist named clyde lewis. we became friends, and a few years later he passed away, leaving me his art equipment and illustrations spanning his career, from the 1930s-1970s. clyde’s work was the starting point and inspiration for the CSA images collection.

painstakingly created over many decades, and inspired by the history of design and illustration, the CSA images collection is a digital museum of art for commerce, and has grown to become one of the world’s leading modern design resources for the creation and preservation of print and pop culture. we’ve spent nearly 4 decades creating the collection and reverse engineering the entire design process, breaking it down into tens of thousands of individual images, type, and design components that can be searched and reassembled to create an endless variety of products. although the collection is inspired by historic design, to describe it only as ‘vintage’ would be an extreme understatement, which doesn’t begin to describe the tons of hours of work we put into creating new, original art ,and also transforming historic images to make them more modern, and relevant, to a contemporary audience.

CSA images now contains 80,000 illustrations and design elements with an additional 100,000 images in process, originating from a base of millions, and constantly expanding. 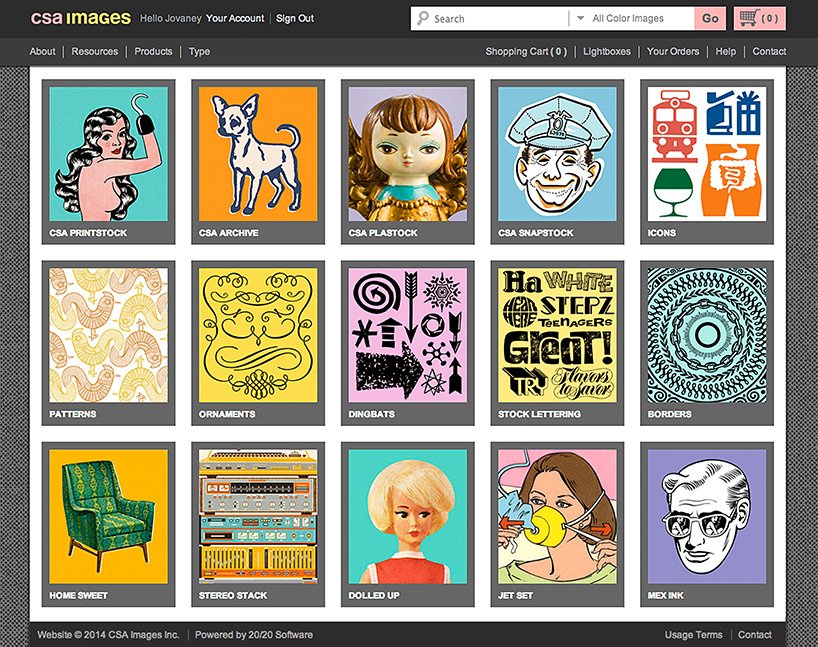 DB: what’s the thing you enjoy most about graphic design?
CSA: that graphic design has become a viable art form in it’s own right, and has moved beyond it’s origins as solely a vehicle for corporate communication. I’ve always thought of design as a product rather than solely a service to corporations, and a conveyor of corporate messages. designers have their own stories to tell, and products to create. 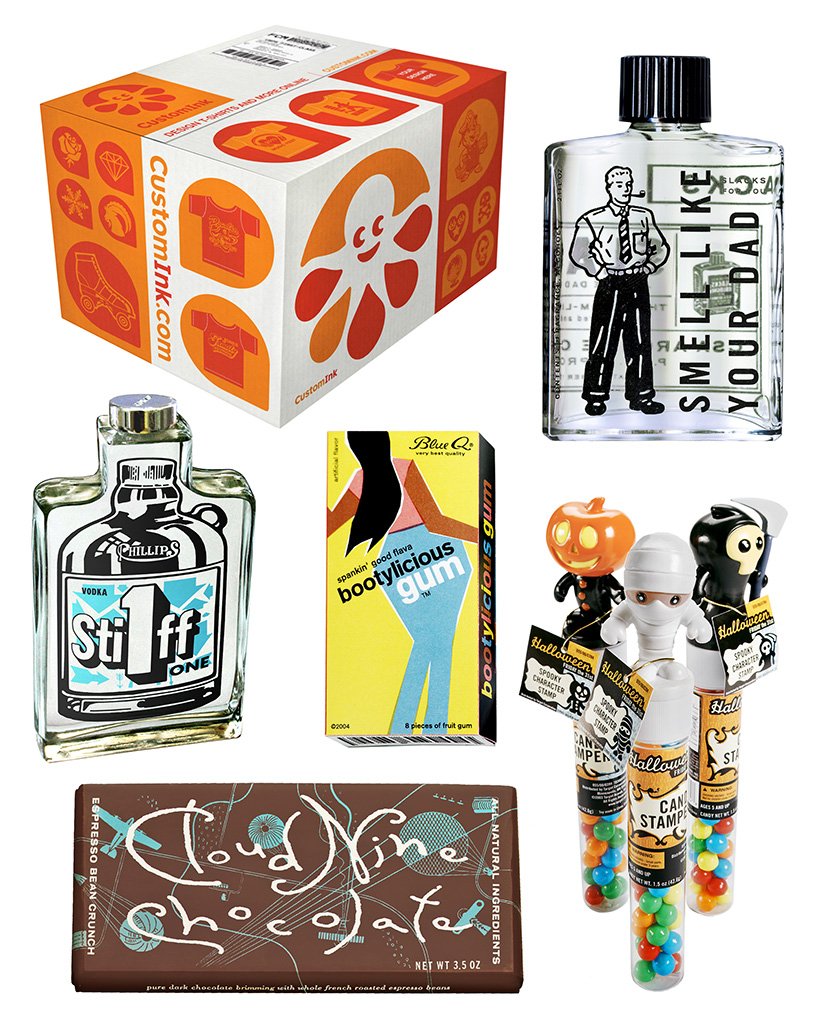 DB: which of your projects have you enjoyed the most to date?
CSA: french paper is our best and longest client. I’ve been working with them nearly 30 years. they’re also a licensee for CSA images on paper products. founded in 1871, french is one of the last, small, family-owned, independent mills left in america. and one of the top paper brands. over the years we’ve designed french’s identity, packaging, promotions, website, and have even worked with them to design the paper itself. we are optimistic about the future of paper, and how it continues to integrate with digital and online technology. french was the first mill to sell paper online (in 1995) and their website is still one of the clearest and easiest to use. the french paper sample room is a community of french paper users brought together by a love for design, paper, and printing. the sample room blog aims to showcase the best work printed on french paper.

we like to portray jerry french (french paper’s fifth generation president) as a living breathing trademark character for french paper. i remember when jerry first received prototypes of an inflatable jerry promotion that we designed. he was blowing up the deflated vinyl figure and it wasn’t until it was completely inflated that he discovered the nozzle was in the crotch! he was literally blowing himself up! he said ‘those flaky designers did it to me again!’ he called me and ordered to have the nozzle moved so that his customers wouldn’t make the same disturbing discovery after they blew up the figure. unfortunately when the shipment of 20,000 finished inflatable jerry’s arrived he discovered that they’d moved the nozzle from the crotch back to the ass! jerry does try take all this in stride because french paper’s sense of humor has always been one of their greatest asses- I mean assets!

once we printed the french paper logo on urine deodorizer cakes and placed them in dozens of urinals at a national design conference. unfortunately we failed to tell jerry in advance. he had to discover it, along with hundreds of other designers, while relieving himself during a break after the conferences opening session! he looked down while peeing and noticed something printed on the deodorizer cake. it was his logo! the yellow stained type circling the french logo read urine business with french paper! that one really pissed jerry off! when he confronted me I told him ‘you should have seen our number two idea!’ in the end it became known as one of the most effective guerrilla marketing tactics in design conference history. 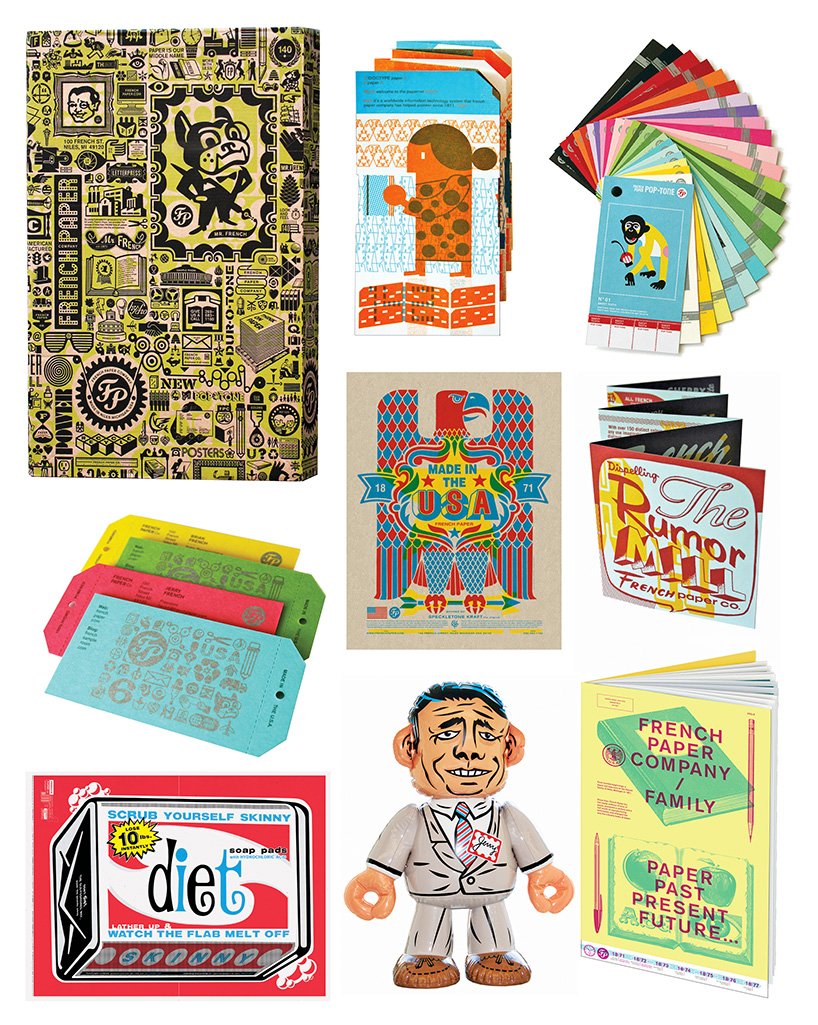 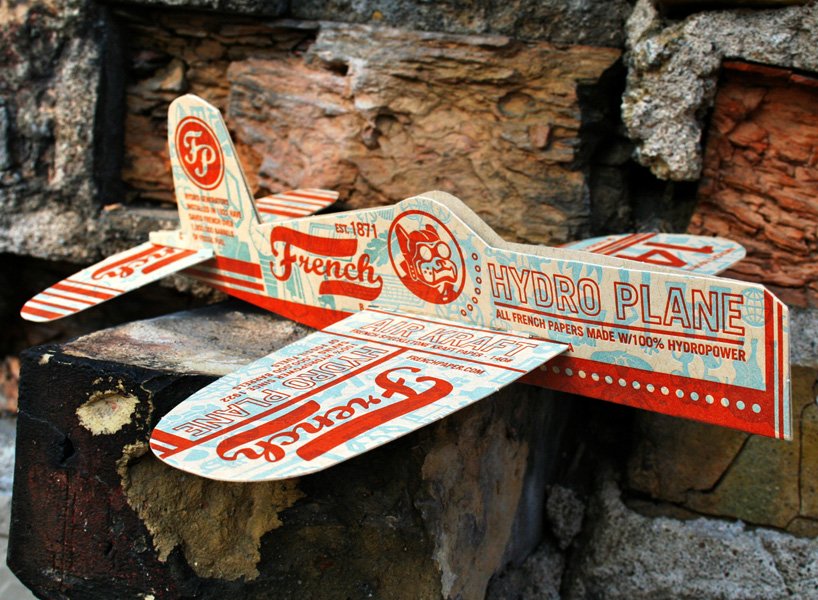 DB: what areas of your work are you hoping to explore in 2014?
CSA: my goal in 2014 and beyond is to continue the product design work of pioneers from the middle of the last century. the difference is that I envision products online, in virtual form, with connections to social communities, that allow everyone to create their own products, using our CSA images, type, and design elements. we don’t believe in design democracy, because not everyone has talent, or a desire to design. we do believe in design selection, and customization which allows average people to create above average custom graphic products. another goal is to continue to create work that’s both timely and timeless, inspired by the entire history of modern design.

DB: what do you know now that you wish you knew when you left university?
CSA: the usual stuff like contracts, licensing, copyright, trademark, negotiations, and general business. although it likely would have required several additional years of college to acquire this knowledge, and it probably wouldn’t have been as effective as my 30+ years of education from the school of hard knocks. 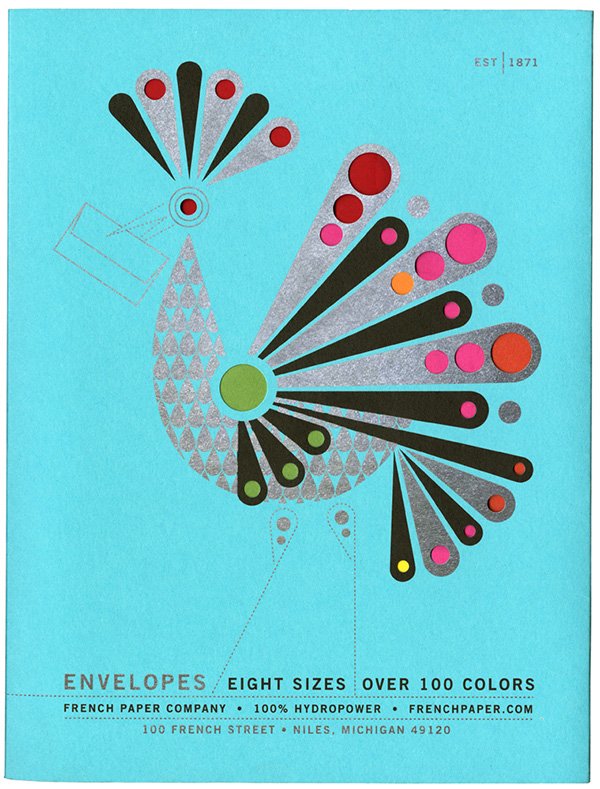 DB: do you draw very much and do you think it’s important to be able to draw as a designer?
CSA: everyone at our studio can illustrate and design, although I prefer collage because then I can utilize my vast archive of printed paper. I think the ability to draw is important for a designer, even if it’s just making sketches for logo directions. drawing is a first important step to making ideas concrete. beyond drawing it’s also important to know how to use existing illustrations with type in the context of a finished design.

DB: what do you do to keep your ideas fresh?
CSA: my company works on the edge of the digital and the analog, and at the intersection of art, design, and technology. now, in addition to commercial client projects, we’re also involved in licensing for categories including, home furnishings, apparel, and other products in partnership with companies including, customink, speck products, shutterfly, and others, including a recent license agreement  with art.com, the world’s leading online art company. over 40,000 CSA images are available on their site as framed art and canvases in various sizes and frame styles. although art.com has over one million works of art, CSA images is the largest, and most unique illustration collection on their site. this kind of project diversity, in addition to varied product applications help keep it interesting. 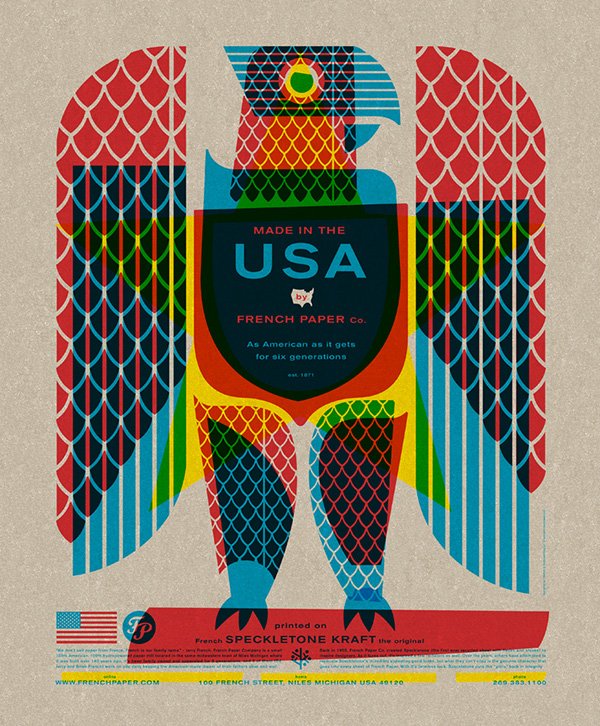 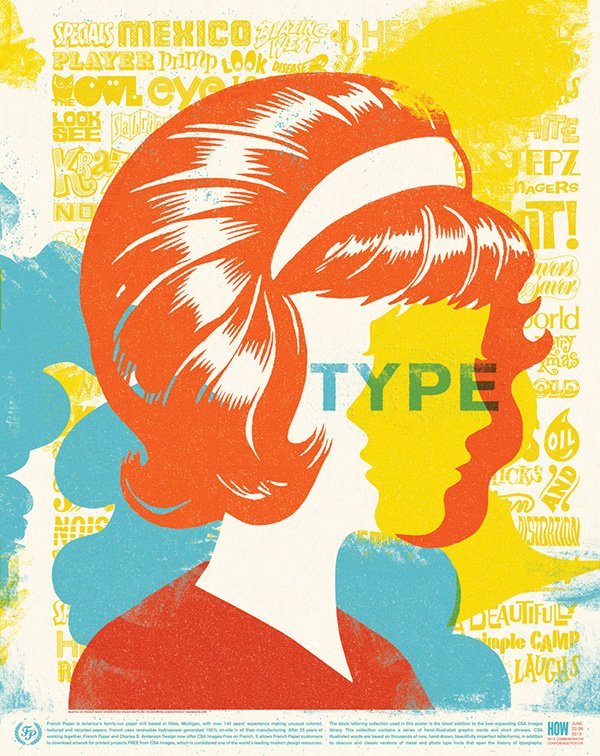 DB: what compels you to design and what other compulsions do you have?
CSA: a love of visual art, and making things. I view myself as a design entrepreneur, and collector / curator of images, and design elements spanning the history of design and pop culture. I compiled this material, for nearly 4 decades purely for the love of the aesthetics, and without a clearly defined purpose, or specific application in mind. with the help of a team of designers, illustrators, artists, and programmers, we’ve spent decades creating new original images, and also modernizing these historic images, transforming them into the world’s leading, pop culture inspired, digital design resource. now that print on demand technology is allowing the digital to return to the analog, and social media has finally transitioned from written to visual content, i find that after 4 decades my images collection suddenly has a wide variety of analog and digital product applications!

our historic building and warehouse in minneapolis contain millions of pop culture artifacts and original art created and compiled over the decades. my collection of plastic stuff is still growing, half a century later (100,000 objects and counting) i view these as modern sculptures. our next project will be to make 3D scans of these plastic objects for products like jewelry, ornaments, lighting, and the world’s most unusual and amazing lawn ornaments.

we also have 10,000 unique individual words (not fonts) on the CSA images site, searchable by keyword. these words come from every imaginable printed source and span the history of wood, metal, and photo type, including thousands of hand lettered words that we’ve created and compiled along the way. we’ve also recently added nearly 2,000 of the most unusual individual letters and numbers to this collection. 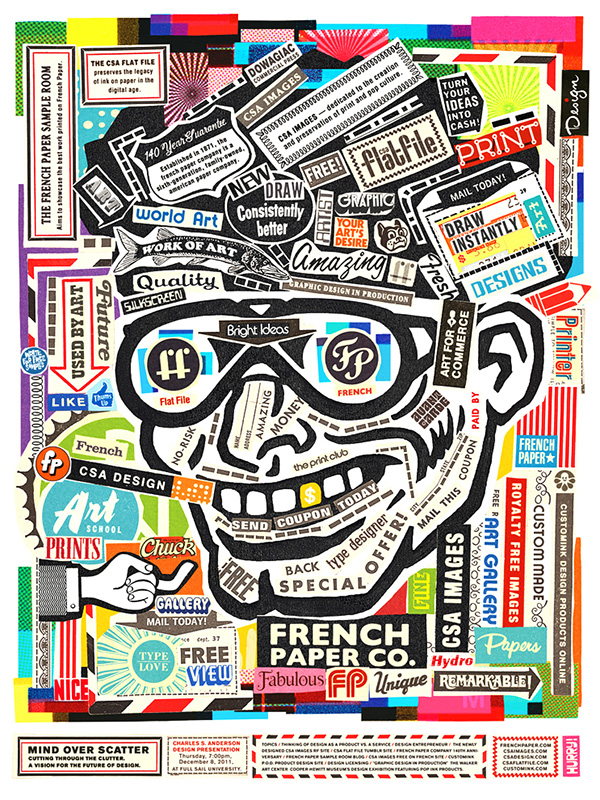 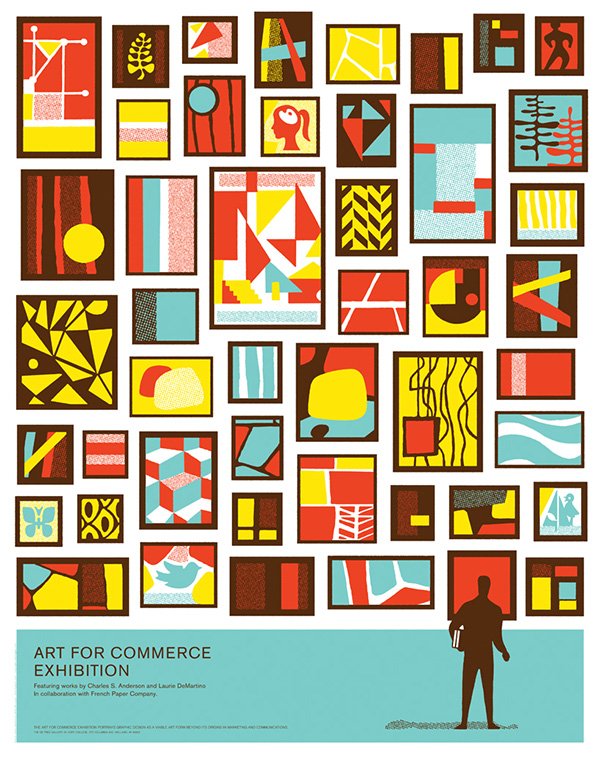 DB: do you have any beliefs or self imposed rules?
CSA: I believe that joy, in addition to art, culture, and humor are essential, and invaluable design attributes that many big corporations are just now beginning to appreciate. I also believe that god is the creator of all, and the source of all creativity. 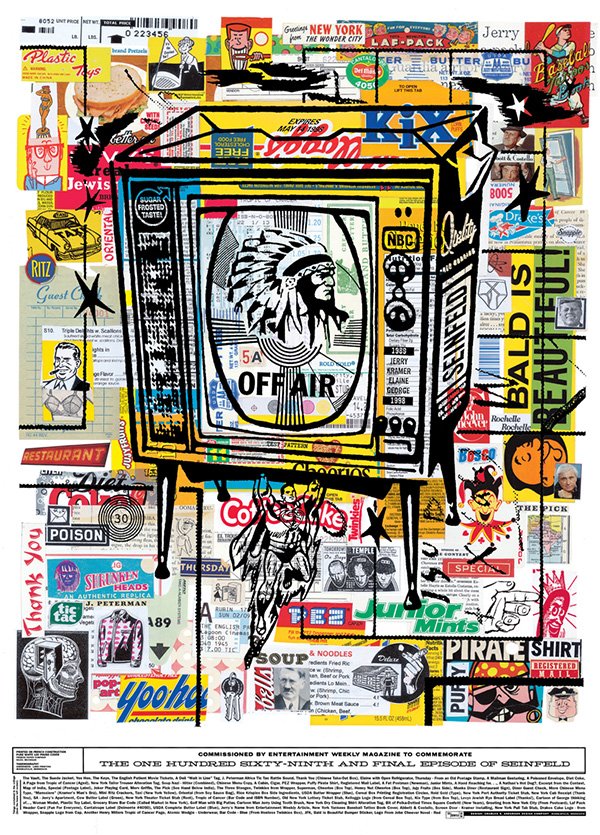 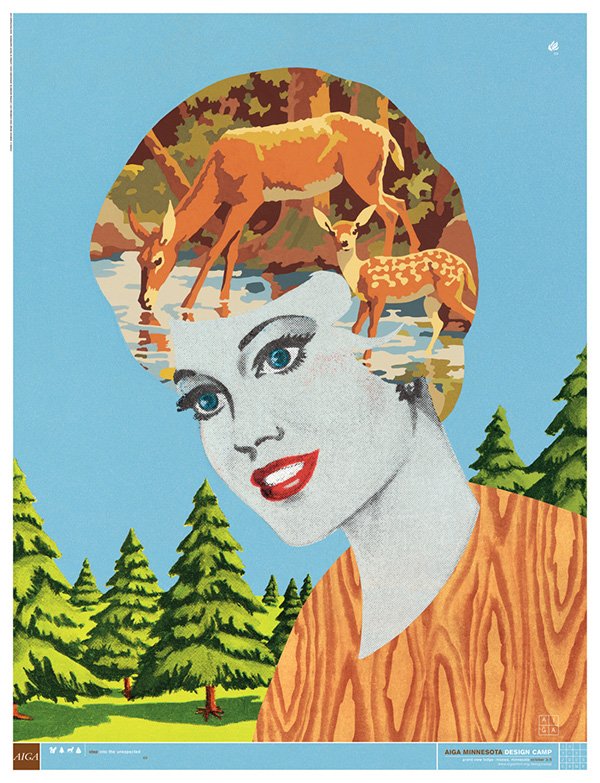 DB: what’s the last thing that made you say ‘wow’ ?
CSA: when steven heller (americas most brilliant and prolific design author and historian) sent me his final draft for my AIGA medalist page. joining the ranks of these legendary designers spanning the history of the profession is a humbling, and overwhelming honor to say the least!