Prince Harry’s biographer has questioned the royal’s bond with Britain after spotting a hidden message in wife Meghan Markle‘s book, The Bench.

Angela Levin, author of Harry: Biography of a Prince, appeared on Sky News on Tuesday and spoke to host Kay Burley about one specific illustration in Meghan’s first children book, where a red-headed soldier wearing an American uniform is seen holding his young son aloft as a woman watches on crying from a window.

This is a likely reference to her and Harry, who served in Afghanistan with the Blues and Royals. The words read: ‘This is your bench, Where life begins, For you and our son our baby, our kin’.

The royal expert suggested that the Duke of Sussex may feel estranged from Britain and explained: ‘They have got obviously a caricature of Prince Harry, red hair with his son. And he is wearing an American army uniform.

‘Now is there something else there. Is it “I don’t want to be British anymore?” Is it a mistake because they thought this is what an Englishman wears when he is out in the army. It has all sort of has innuendos and separate meanings.’ 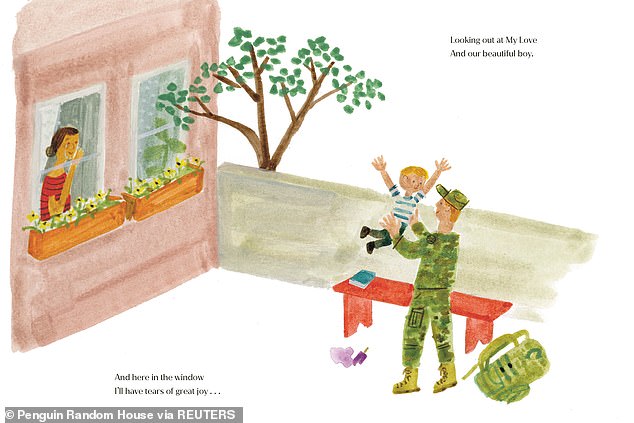 Prince Harry’s biographer Angela Levin has questioned the royal’s bond with Britain after spotting a hidden message in wife Meghan Markle’s book, The Bench. Pictured, an illustration of what appears to be the royal donning a US-style army uniform in The Bench 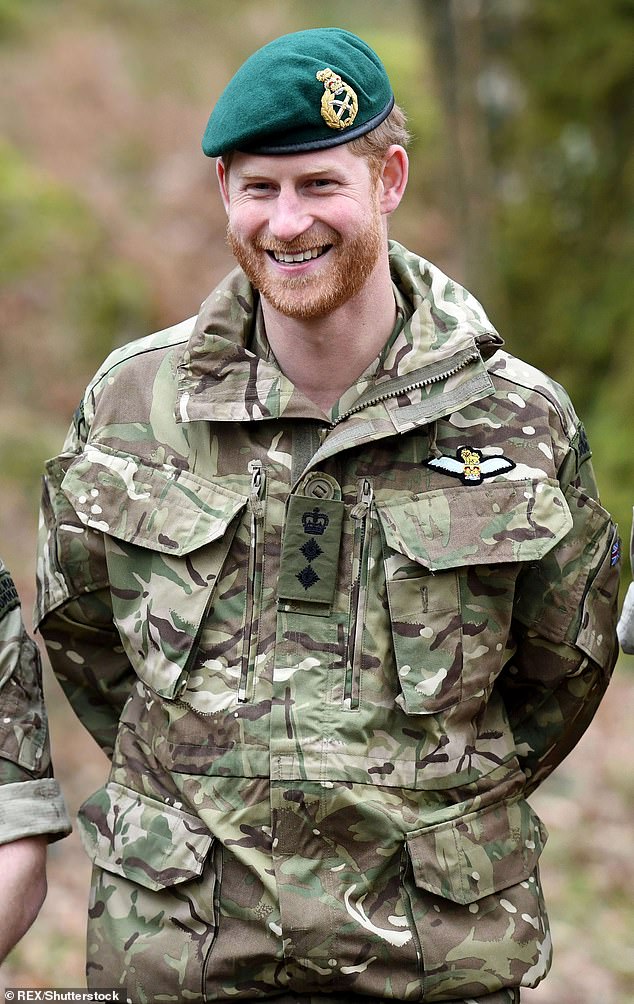 The Duke of Sussex (pictured, in a British army uniform), served a decade in the military and two tours in Afghanistan between 2007 and 2008 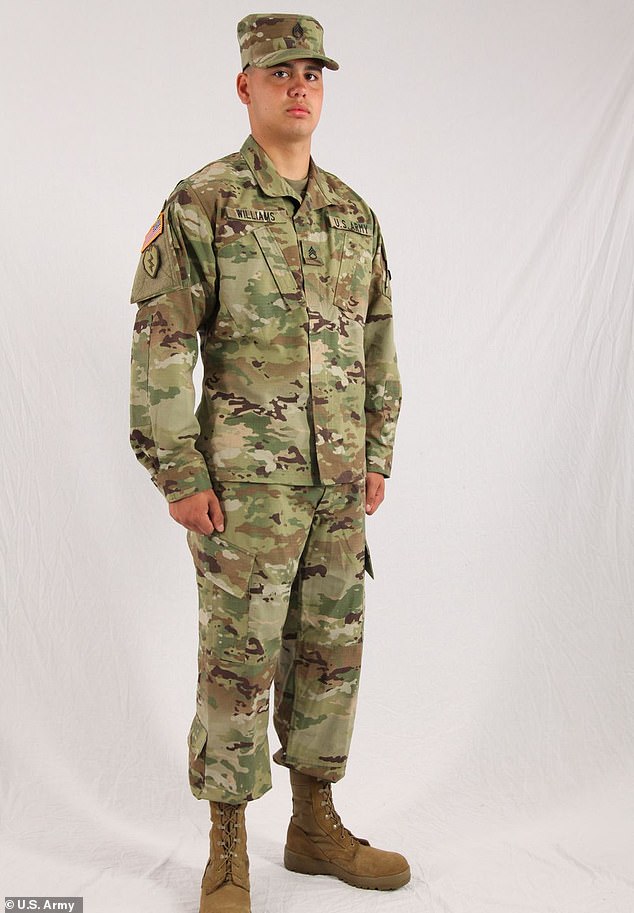 The illustration of the red-headed soldier resembles the same hat, boots and pattern of the US-military uniform (pictured)

The debut book, which hit stores across the UK yesterday, was inspired by a poem the Duchess of Susssex, wrote for Prince Harry’s first Father’s Day the month after Archie was born.

However, the children’s book was slated by critics as a ‘vanity project’ on the day of its release – with one calling it a ‘bland self-help manual for needy parents’.

The book, which costs £12.99, explores the ‘special bond between father and son’ as ‘seen through a mother’s eyes’.

Meghan dedicated it to Prince Harry and Archie, saying they make her heart go ‘pump-pump’, and wrote alongside a picture of a father and son playing with toy dinosaurs: ‘When life feels in shambles, you’ll help him find order.’ 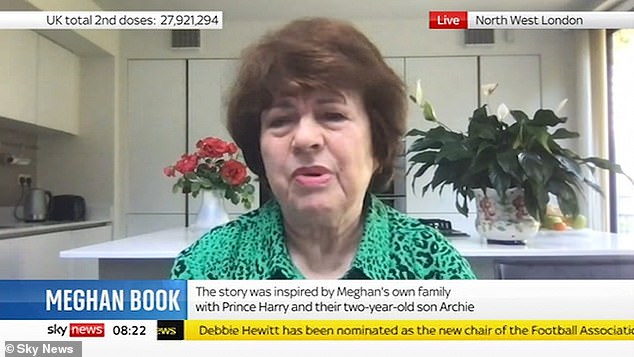 Speaking of the possible hidden meanings, Angela Levin continued: ‘I think if you want to write a book for children you don’t have to go into all these things. You can make it fun, make it interesting.’

‘Have some sort of interesting thought for the children to think about. But I don’t think anyone who wasn’t Meghan would have got this through the publisher.’

Scenes in the book include several illustrations of Prince Harry, recognisable with his ginger hair and beard, and the couple’s two-year-old son Archie.

The first illustration features a bearded ginger father – who bears a resemblance to the duke – cradling a smiling baby on a bench under a tree.

The text reads: ‘This is your bench, where life will begin, for you and our son, our baby, our kin.’ 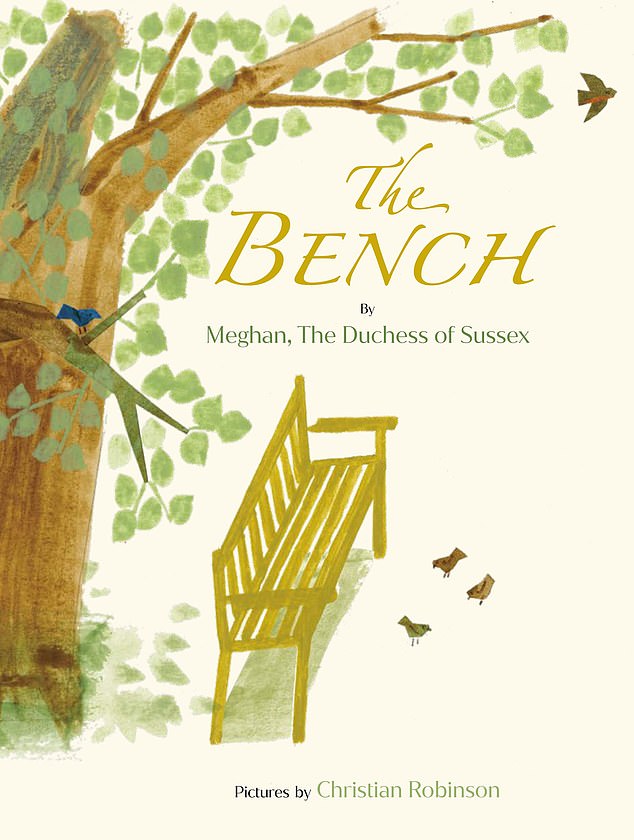 According to royal biographer Phil Dampier, the children’s book (pictured) hints at how unhappy Prince Harry, who served a decade in the military and two tours in Afghanistan between 2007 and 2008, is to have lost his military titles

Another illustration shows the duke sitting on a bench while feeding his rescue chickens, which the couple house at their £11million mansion in Montecito.

Meghan, dressed in a summer’s hat, white T-shirt and jeans, also appears to be sketched in a vegetable patch located near her husband and son cradling her daughter, Lilibet Diana Mountbatten-Windsor, who arrived on Friday.

As well as the chickens – which appeared during the broadcast of the couple’s bombshell interview with Oprah Winfrey in March – two dogs also feature in the illustration.

Further into the book, a father lies asleep on a bench holding his son closely. The boy sweetly clutches a toy giraffe in one hand while holding his father’s hand in the other.

The text reads: ‘From here you will rest, see the growth of our boy.’

In another illustration, a father and son duo each wear pink tutus while performing ballet poses.

The accompanying words read: ‘You’ll love him. You’ll listen. You’ll be his supporter.’