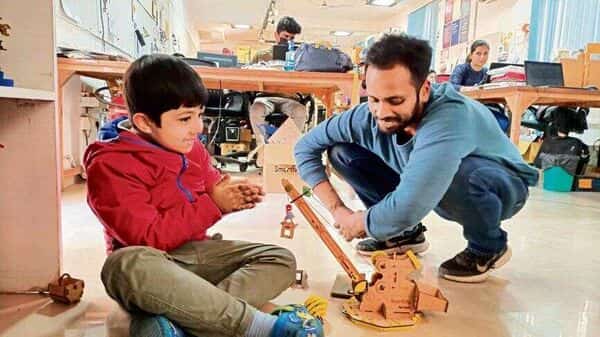 There are rows of tables with pieces of toys-in-the-making strewn around, a laser cutter machine at one end of the room, one wall-to-wall shelf showcasing already launched products, and a handful of motivational posters that one can pick up from the street side.

At first look, all of it is underwhelming. But it unravels with time.

A young bunch—engineers and graduates from design schools—is busy fiddling with cutouts, pieces of foam, connectors and rubber bands. The co-founder and product head, Rajat Jain, 32, sits on the floor, listening intently to the feedback from a visiting seven-year-old.

Early evening, suddenly, the floor comes alive. Young employees throw darts at each other, testing a new product—the darts are fired from an air-blaster. They all burst out into loud cheers but one of them remains immersed in his laptop, oblivious to the noise around and wearing a helmet for protection from the randomly flying objects.

For instance, its best-selling product, a hydraulic plane launcher, can be assembled from scratch by a six-year-old from pieces of pre-cut board and tying these up with colourful rubber bands. Constructing it takes some patience but the end result is magical. Push the syringe plunger attached to one end and the launcher rises gradually, taking position, to launch a paper plane.

Product reviews on e-commerce site Amazon are filled with testimonies of parents saying they had as much fun as their little ones while building it. Besides, it keeps children away from their computer and phone screens, improves their motor and cognitive skills, makes them more focused and attentive while introducing them to basic concepts like hydraulics (liquid pressure), aerodynamics and gravity.

“We learn so many scientific concepts and equations in school but never use them in real life and that motivated us to design DIY construction toys. Our goal is to make learning more experiential for children… we also realized that the Indian market had barely evolved and parents had limited options,” said Ashwini Kumar, who along with Rajat Jain and Apoorv Gupta, batchmates from the Indian Institute of Technology, Delhi, set up Smartivity in 2015.

It took the trio six years to reach some impressive milestones: more than 80 products and a handful of patents; shipping more than a million units in 2021-22 with a quarter of those in international sales; being featured in Time magazines’ ‘Best Toys of 2020’ list; a nomination in The Toy Foundation’s Toy of The Year awards (sort of an Oscar for the industry) in 2022, a first for any Indian brand.

But when it comes to STEM, Smartivity isn’t the only creator around. A bunch of young Indian companies are now altering the market, catering to parents who are keen to see their children engage with toys beyond run-of-the-mill board games, barbies and remote-controlled cars.

The covid pandemic which locked up children boosted this nascent market, by engaging children for longer hours and providing them with a sense of accomplishment.

“From when my son was very young, we were careful while selecting toys… we still get him toys which can unleash his imagination and stimulate his senses,” tells Akanksha Jha, a medical professional. So, her son Apoorv, now seven, was never into cars or guns even when he received those as birthday presents. Instead, he was obsessed with dinosaurs which made him realize how life evolved on earth. Apoorv still spends hours with interlocking links building anything and everything under the sun.

Many of the Indian STEM startups—Butterfly EduFields, Skillmatics, JackinTheBox and PlayShifu to name a few—are gaining ground in the international market dominated by big names like Lego, Mattel and Hasbro. Some of these could well turn out to be ‘Make in India’ success stories in future, coming from a nation which is addicted to cheap Chinese imports.

“Starting 2017, when we launched our first product—an augmented reality globe called Orboot—we have evolved from a domestic to a global brand with a presence in 40 geographies including North America, Middle-East and Europe,” said Dinesh Advani, co-founder at PlayShifu. The startup sold 3,50,000 units in 2021-22, with international sales accounting for a staggering 80% share.

“And mind you, STEM is not restricted to toys alone,” adds Advani, “…there is robotics, coding, and a creator economy for kids. The entire movement is hopping onto a curve where it will simply explode.”

The Indian toy market is heavily import dependent with the domestic industry having a miniscule global footprint, observed a September 2021 report titled ‘State of Play: India’s toy story’ by the KPMG consultancy and industry lobby FICCI. According to data from the report, the size of the global toy industry is estimated at $95 billion in 2020. In comparison, the largely unorganised Indian market is just $1 billion with 85% of it comprising of imported toys. Indians also spent a miniscule $3 per child per year on toys, compared to $300 per child in north America and $34 in Asia.

However, the last few years have seen some discernible changes. Imports contracted 12% in CAGR terms between 2016-20 (yet China accounted for 86% of imports). Exports grew 61% during this period, from $139 million to $224 million. The government also introduced a clutch of policy changes with toys included as a key element of the Atmanirbhar Bharat Abhiyan (self-reliant India movement) and as an integral component of the National Education policy, 2020. It also formulated a national action plan for toys and approved eight new manufacturing clusters in five states.

“Last January, import duties were raised from 20% to 66%, and all factories which sell toys to children, be it in India or abroad, were mandated to get a BIS (Bureau of Indian Standards) certification… The goal is to promote domestic manufacturing and cut imports from China,” said Philip Royappan, deputy general manager at Funskool, among the oldest brands in India, set up in 1987. In recent years, Funskool, once a distributor for international brands like Lego and Hasbro, has pivoted to a new range of products focusing on ‘play and learn’.

The State of Play report, based on discussions with manufacturers, observed a negative outlook for future investments due to a demand slowdown coupled with a 35% average increase in debts. The survey estimated that 90% of manufacturers were likely to report losses during FY2020-22, while exporters lost out to foreign manufacturers due to challenges in sourcing imported components.

However, budding STEM players accounting for less than a tenth of the Indian market weathered the storm better. They were already catering to a more affluent and wealthier section of the population—STEM toys cost anywhere between ₹400 to upwards of ₹2,000 per unit—and also because they pivoted quickly to online channels like Flipkart and Amazon as retail stores downed shutters.

Some, like Avishkaar, overhauled their business model. It had set up robotics and automation labs in over 1,500 schools across India. Then 2020 happened and 99% of its revenues dried up. According to Tarun Bhalla who started Avishkaar in 2010, the company had to ‘reinvent’ itself by entering the consumer market with DIY robotic kits. Two years later, it is clocking 2,100 units every month, sold entirely on e-commerce sites.

“Our ₹2,500 robotics kit (for beginners) is the most affordable and powerful in its category. You build it, program it, control it from a lab… it’s a real deal. But selling it through an established retail chain means squeezing all margins or making the product prohibitively expensive for consumers,” Bhalla said.

Beyond market dynamics, the idea behind Avishkaar, added Bhalla, is to enhance foundational and cognitive learning for children, by teaching them aspects like sequencing. “It’s like those who are good at giving directions—how to reach from one part of a city to another—they are also able to break a complex problem into smaller parts. Our DIY robots are designed on similar principles to enhance a child’s problem-solving skills,” he said.

According to Kanchan Mishra, senior director, consumables and general merchandise at Flipkart, STEM products listed on its e-commerce platform are among the fastest growing segment in its category registering over 100% growth year-on-year. “Over the past couple of years, we have listed over a thousand STEM products developed by more than a hundred Indian brands. While metros like Bengaluru, Delhi and Chennai leads in sales, tier-II cities (such as Indore, Mysore, Surat and Nagpur) are also seeing a surge in demand.”

“We guide STEM makers on price-points, product development and branding and see this segment as a huge opportunity under the Make-in-India program… but since average consumer spend is less than ₹400 per toy, there is still a big gap to be bridged (average price of STEM products is around ₹1,000 per unit).

“Many STEM toy sellers from India are serving customers across the world through our e-commerce exports programme. It is among the fastest growing toy categories… and Indian sellers on Amazon Global witnessed nearly 5X jump in business during the recent Black Friday-Cyber Monday sales and the holiday season in the US,” Tiwary added.

In 2020, Skillmatics, which designs educational games, crossed 3 million units in global sales and also became the first Indian brand to sell globally with Hamleys, Walmart and Target. Similarly, JackInTheBox, which is into solving the ubiquitous problem of gadget addiction in children, has reached customers across 15 countries, after starting off with Amazon Global in 2017.

Over the past decade, the global toy market has evolved and is being altered by the rising popularity of STEM products. For instance, in 2012, the Danish brand Lego launched a range aimed at girls which was heavily criticized for reinforcing gender stereotypes.

The barrage of criticism included a letter written to Lego by a 7-year-old girl, Charlotte Benjamin. “I don’t like that there are more lego boy people and barely any lego girls…All the girls did was sit at home, go to the beach, and shop, and they had no jobs but the boys went on adventures, worked, saved people, and had jobs, even swam with sharks,” she wrote.

Lego now has a new range of STEM toys which includes a lunar rover inspired by the NASA original and a grand piano powered by an electric motor.

STEM makers, including in India, often work closely with educators, child psychologists, parents and children while developing new products. The result is a rich tapestry of new experiences. Seher Ranjan, an eight-year-old living in Noida, says she is over with Barbies and construction sets. Science and natural history trivia, chemical reactions, and electric circuits fascinate her. After ‘Santa’ gifted her an augmented reality globe last Christmas (that was on-demand after browsing online), it opened up a world waiting to be explored. She wants to visit Japan and is learning the language one word at a time, and also the Quebec province in Canada to try out a dish called poutine, a variant of cheesy fries.

“I was surprised when a friend told me that a man named Putin has started a war. How strange it would be to eat poutine now,” she said, laughing.